Vitamin B12b Enhances the Cytotoxicity of Diethyldithiocarbamate in a Synergistic Manner, Inducing the Paraptosis-Like Death of Human Larynx Carcinoma Cells

We have shown that hydroxycobalamin (vitamin B12b) increases the toxicity of diethyldithiocarbamate (DDC) to tumor cells by catalyzing the formation of disulfiram (DSF) oxi-derivatives. The purpose of this study was to elucidate the mechanism of tumor cell death induced by the combination DDC + B12b. It was found that cell death induced by DDC + B12b differed from apoptosis, autophagy, and necrosis. During the initiation of cell death, numerous vacuoles formed from ER cisterns in the cytoplasm, and cell death was partially suppressed by the inhibitors of protein synthesis and folding, the IP3 receptor inhibitor as well as by thiols. At this time, a short-term rise in the expression of ER-stress markers BiP and PERK with a steady increase in the expression of CHOP were detected. After the vacuolization of the cytoplasm, functional disorders of mitochondria and an increase in the generation of superoxide anion in them occurred. Taken together, the results obtained indicate that DDC and B12b used in combination exert a synergistic toxic effect on tumor cells by causing severe ER stress, extensive ER vacuolization, and inhibition of apoptosis, which ultimately leads to the induction of paraptosis-like cell death. View Full-Text
Keywords: hydroxycobalamin; vitamin B12b; diethyldithiocarbamate; synergism; cytotoxicity; endoplasmic reticulum; ER-stress; cytoplasm vacuolization; paraptosis-like cell death hydroxycobalamin; vitamin B12b; diethyldithiocarbamate; synergism; cytotoxicity; endoplasmic reticulum; ER-stress; cytoplasm vacuolization; paraptosis-like cell death
►▼ Show Figures 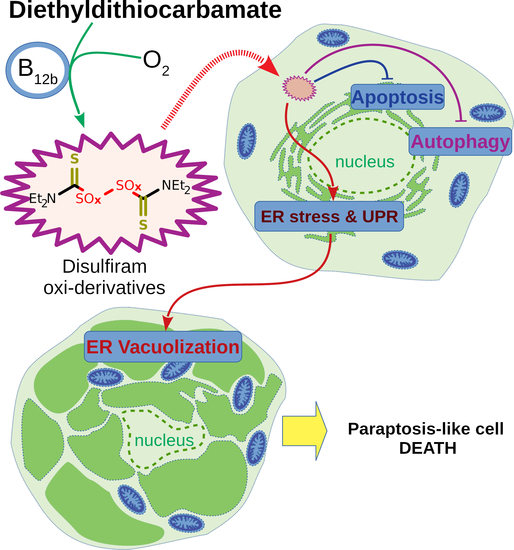