Accurate prediction of protein stability changes resulting from amino acid substitutions is of utmost importance in medicine to better understand which mutations are deleterious, leading to diseases, and which are neutral. Since conducting wet lab experiments to get a better understanding of protein mutations is costly and time consuming, and because of huge number of possible mutations the need of computational methods that could accurately predict effects of amino acid mutations is of greatest importance. In this research, we present a robust methodology to predict the energy changes of a proteins upon mutations. The proposed prediction scheme is based on two step algorithm that is a Holdout Random Sampler followed by a neural network model for regression. The Holdout Random Sampler is utilized to analysis the energy change, the corresponding uncertainty, and to obtain a set of admissible energy changes, expressed as a cumulative distribution function. These values are further utilized to train a simple neural network model that can predict the energy changes. Results were blindly tested (validated) against experimental energy changes, giving Pearson correlation coefficients of 0.66 for Single Point Mutations and 0.77 for Multiple Point Mutations. These results confirm the successfulness of our method, since it outperforms majority of previous studies in this field. View Full-Text
Keywords: protein mutation; machine learning; holdout sampler; mutation stability; neural network protein mutation; machine learning; holdout sampler; mutation stability; neural network
►▼ Show Figures 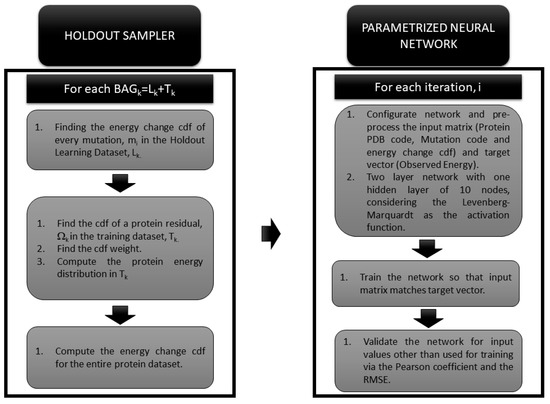