Charge Exchange Cross Sections for Noble Gas Ions and N2 between 0.2 and 5.0 keV

Electron collisions drive many processes both in the natural world and industrial processes. Compilations of electron collision cross sections, see for example [1,2,3,4], are becoming increasingly reliant on theory. Indeed the difficulty of measuring cross sections for chemically unstable species (radicals) has led to the suggestion that computed cross sections represent the solution for many problems involving technological plasmas [5,6]. Computed cross sections sets for key species are beginning to become available [7,8]. Computing such data sets, especially for low-energy collisions, requires sophisticated computer programs capable of treating both the electronic structure of the target molecule and the details of the electron collision process.
The R-matrix method [9] has proved very powerful for computing cross sections for a whole range of atomic and molecular problems [9]. For electron–molecule collisions the method has been implemented in a series of codes [10,11,12,13], generically known as the UK Molecular R-matrix (UKRmol) codes. These codes are powerful and can be used to tackle a variety of problems [14] but they are far from straightforward to run, as they require specialist knowledge on both molecular structure and electron scattering as well as experience on how to build sophisticated and balanced models, see [15,16,17] for example.
To address this problem Quantemol Ltd. developed an expert system, known as Quantemol-N (QN) [18], to run the UKRmol codes of Carr et al. [12]. Over time this code was developed to include not only the normal facilities of the UKRMol code to compute elastic and electronically inelastic cross sections but also to compute differential, momentum transfer and rotational excitation cross sections using code POLYDCS [19], ionization cross sections using the BEB (binary encounter Bethe) method of Kim and Rudd [20], and an especially developed dissociative electron attachment (DEA) estimator [21]. More recent developments involved the extension of calculations to high energies using the so-called BEf procedure of Kim [22] and the spherical complex optical potential (SCOP) method [23,24,25]. Recent releases of QN also feature an implementation of the UKRMol photoionization model [26].
Recently Benda, Mašín, Gorfinkiel and co-workers have developed a significantly updated and improved version of the UK Molecular R-matrix codes known as UKRmol+ [13]. New features in UKRMol+ include the implementation of new integrals package [27] which allows the use of Gaussian (GTO) [28] and B-spline (BTO) [29,30] type orbitals to represent the continuum. This new package facilitates the treatment of electron collisions with significantly larger molecules than was possible with UKRmol [31] and hence QN. UKRmol+ also features a greatly improved procedure for construction and diagonalization of the inner region Hamiltonian matrix [32], which is the rate-limiting step in most R-matrix calculations, as well as a number of other improvements.
Previous implementations of these codes essentially contained a quantum chemistry code at their heart. In order to construct the Hamiltonian matrix on the basis of configurations, a unique set of molecular orbitals describing the target molecule are needed. Previous implementations of the codes contained programs that allowed generation of these orbitals using simple approaches. UKRmol+ uses a different philosophy whereby the target molecular orbitals and the atomic GTO basis are read in from a file in the Molden format [33]. Although the Molden file is general and can be generated by a range of quantum chemistry software, most calculations actually use the general-purpose quantum chemistry program package Molpro [34,35]. This gives UKRmol+ access to orbitals generated using a wide range of sophisticated methods including state-averaged complete active space self-consistent field (CASSCF).
To take advantage of the improvements offered by the new UKRmol+ code, we decided to build a new expert system, known as Quantemol Electron Collisions or QEC for short. QEC incorporates all the features of QN discussed above plus new functionality made possible by UKRmol+ and closer integration with Molpro. The purpose of this paper is to describe the QEC expert system.

The R-matrix method is an example of an embedding method which divides space into different regions. In this case the method uses an inner region which is a sphere of radius a and an outer region. In its most general form the inner region wave functions are represented by the close-coupling expansion:
In this equation represents the target wave function. In QEC this wave function is generated using GTOs from the Molpro basis set library and orbital imported from Molpro generated with one of two models: either HF (Hartree–Fock) or MC-SCF (multi-configuration self consistent field) as discussed below. The are orbitals used to represent the continuum for which QEC has a library of GTO functions based on those of Faure et al. [28]. Functions with (i.e., up to g wave) are explicitly included. The antisymmetriser, , ensures that the product of the target wave function and continuum orbital obeys the Pauli principle.
The second sum in Equation (1) runs over configurations so-called where all electrons are place in target orbitals. The precise configurations chosen depends on the model used for a particular calculation. QEC implements three distinct scattering models which are selected by the user.
Static exchange (SE) is the simplest model implemented; it uses HF target wave function and the configurations are given simply by placing the scattering electron in unoccupied target (virtual) orbitals.
Static exchange plus polarization (SEP) builds on the SE model by also including configurations which involve promoting an electron from the HF target wave function to a virtual orbital while also placing the scattering electron in a target virtual orbital. This provides a good representation of low-lying resonances which are the route to DEA. The SEP model is therefore recommended for computing DEA cross sections.
Close-coupling (CC) expansions involve including several target states in the inner region expansion, Equation (1). This model normally uses a complete active spaces (CAS) description of these states [15] for which it employs MCSCF orbitals (this is an improvment of QN which used HF orbitals for this step). Studies of electron-impact electronic excitation and dissociation (which goes via electronic excitation) must be performed at the CC level; this is also recommended for studies of Feshbach resonances. CC calculations are computationally more demanding than SE or SEP ones.
There is a fourth possible model for studying electron molecule collisions with UKRMol/UKRmol+, which is the R-matrix with pseudostates (RMPS) method [36,37]. The RMPS method is a generalization of the CC method which allows for the inclusion of target continuum states in the CC expansion. RMPS calculations have very useful properties in terms of extending the energy range of the calculations and converging polarization effects [38], but are computationally very demanding [16,39] so as yet have not been implemented in QEC.
Solving the problem in the outer region is performed in two steps. First the R-matrix is propagated from the boundary given by to some large [40], where is chosen such that the non-Coulombic potential can be neglected for asymptotic region defined by ; QEC assumes a and beyond this uses an asymptotic expansion due to Gailitis [41,42]. The K-matrices so calculated are used by QEC to automatically detect and fit resonances [43] and to construct the corresponding T-matrices. The resonance parameters form the main input to the DEA estimator [21]. The T-matrices are used to compute elastic and electronically inelastic cross sections, and provide the input to code POLYDCS [19] which computes differential, momentum transfer and rotational-excitation cross sections. For molecules with a permanent dipole moment it is necessary to correct for partial waves higher than [44]; this done either using POLYDCS or code BornCross [45]. Finally, the elastic and electronically inelastic cross sections are turned into rates assuming Maxwellian distribution for the electron energies.

The present article describes a new expert system designed for an easy and rapid generation of low-energy electron scattering data using the Quantemol Electron Collision (QEC) expert system. QEC runs an integrated versions of the Molpro ab initio molecular electronic structure code [34,35] and the newly developed UKRmol+ R-matrix electron molecule scattering code [13]. QEC exploits this close coupling of the codes in a number of ways such as automated geometry optimization and symmetry determination, and the direct provision of inputs for SCOP, BEB and BEf calculations. However there are a number of other places where this coupling will be exploited further in the future such as the automated provision of parameters for the DEA estimator.
Future releases of QEC will further increase its functionality. Plans include the implementation of a dissociative recombination estimator [48], automated electron-impact vibrational calculations, and the use of effective core potentials for heavy atoms.

QEC is distributed by Quantemol Ltd; Maria Tudorovskaya and Sebastian Mohr work for Quantemol while Anna Dzarasova and Jonathan Tennyson are company Directors. Aran O’Hare and Martin Hanicinec receive partial support for their studentships from Quantemol. Peter Knowles acts as a consultant to TTI GmbH, the owner of Molpro. None of the other authors are conflicted. 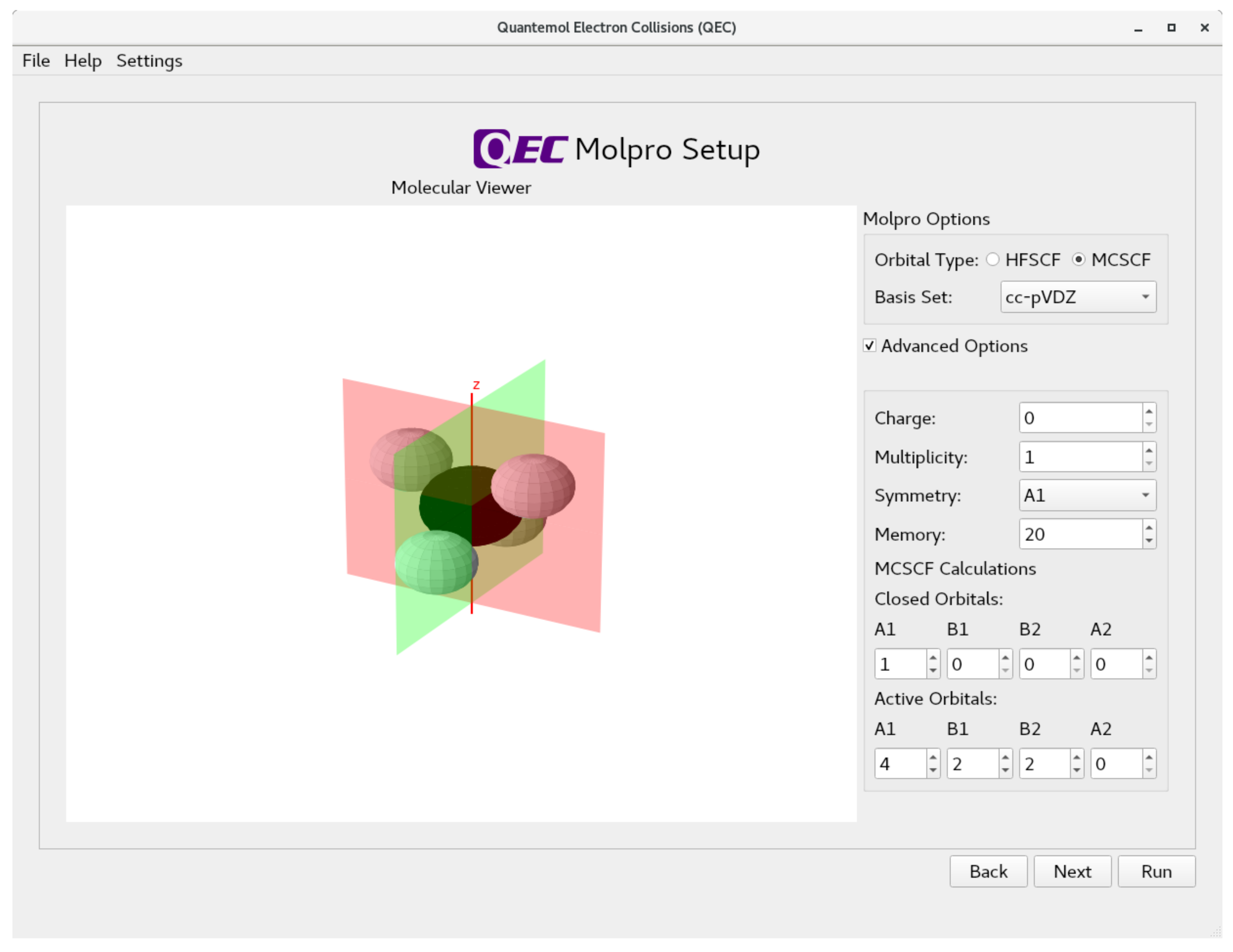