Over the past decades, it was suggested that the hydrohelium (helium hydride) cation HeH can be present and observed in a number of astronomical environments, and particularly, in the planetary nebulae NGC 7027 [1,2,3]. In the interstellar medium (ISM), it is the process of radiative association of He and H or of He and H that forms the ion [4,5]. However, only very recently, the presence of the ion was confirmed by Güsten et al. [6] with the observation of the rotational ground-state transition of HeH in the planetary nebula NGC 7027. These observations were made possible due to advances in terahertz spectroscopy [7] and high-altitude observatories [8]. Previously, a transition with a wavelength very similar to that of the rotational transition was found by Liu et al. [9]. However, further analysis suggested that it was actually caused by the CH molecule [10].
HeH is easily formed in helium–hydrogen plasma, and in particular, in the hydrogen fusion reaction. The ion, with its isotopologues, plays an important role in the chemistry taking place in tokamaks, especially in the divertor region of the devices. Rovibrationally excited states, formed in collisions of HeH with electrons, can be used for plasma diagnostics. The other process involving the HeH isotopologues and electrons and taking place in the divertor and near walls of the reactors is the process of dissociative recombination. The process removes the ions from the plasma creating neutral atoms, which contribute to the damage of reactor walls.
There have been several experimental and theoretical studies [11,12,13,14,15,16] reporting cross sections for the dissociative recombination. Cross sections for vibrational excitation and de-excitation of the three lowest vibrational states of the ion by electron impact were also calculated previously [17]. However, the presence of vibrational resonances in the collisional spectra was ignored in that study. Čurík and Greene [18] have recently reported cross sections for rotational excitation of HeH collisions, where the Rydberg series of rovibrational resonances were accounted for.
Data relevant to the other isotopologues HeD, HeH, and HeD could also be useful for plasma modeling and diagnostics in fusion reactors. In this respect, cross sections as well as rate coefficients for collisions of the HeH isotopologues with electrons are needed. To our knowledge, there is no such theoretical or experimental data available for the HeH isotopologues.
In a previous study [19] (hereafter referred to as paper I), we reported cross sections and rate coefficients for vibrational excitation for transitions between the five lowest vibrational levels. In a further study [20] (hereafter referred to as paper II), we presented similar data for rotational transitions in collisions of HeH with electrons. In the present study, as a follow-up of papers I and II, we determine cross sections and rate coefficients for vibrational and rotational (de-)excitation for collisions of the four stable HeH isotopologues with electrons.
The rest of the article is organized in the following way. The next section briefly discusses the theoretical approach used in the present calculation. A detailed description of the approach is presented at length in papers I and II, so we restrict ourselves here only to underline its major ideas. In Section 3 and Section 4, the obtained rate coefficients for vibrational and rotational (de-)excitation are discussed and compared with the data available in the literature. Section 5 concludes the study.

Similarly to papers I and II, the present theoretical method uses the UK R-matrix code [21,22] with the Quantemol-N interface [23] and some elements of the quantum defect theory (MQDT) [24,25,26]. The same parameters (the basis and orbital spaces, the R-matrix size, etc.) as in Paper II were employed in the electron-scattering calculations. As a first step in the theoretical approach, the body-frame scattering matrix is obtained numerically for a number of internuclear distances R from 0.85 to 3.95 with a step of 0.05 bohr. At the second step, vibrational wave functions for the four isotopologues are computed by solving the Schrödinger equation for vibrational motion using a DVR-type method [27].
Energies for vibrational and rotational transitions for the four isotopologues are shown in Table 1 and Table 2 and compared with available data [28,29]. Note that unlike the present study, where the aug-cc-pVQZ basis is employed, in paper I, we used the cc-pVQZ basis to compute the potential energy curve (see Figure 2 of paper I). As a result, the obtained vibrational energies for the HeH ion are slightly different in the present study and paper I.

The next step in the treatment is the vibrational and rotational frame transformations. If we neglect the rotational structure of the ion, which corresponds to an experiment where cross sections for vibrational transitions are averaged over all possible initial and summed over allowed final rotational states of the levels v and , the theoretical cross section is obtained from the following scattering matrix: where the brackets imply an integration over the vibrational coordinates. As a second step, the rotational frame transformation is accomplished using the matrix elements of Equation (1), leading to the laboratory-frame scattering matrix where J is the total angular momentum of the -HeH system, and are the angular momenta with their projections on the molecular axis of the target before and after the rotational excitation of HeH (and its isotopologues), and and are Clebsch–Gordan coefficients. A detailed derivation of Equation (2) is given in Appendix A of paper II.
The matrices of Equations (1) and (2) are energy-independent and do not describe vibrational and rovibrational Rydberg resonances present in the collisional spectra. The actual scattering matrices are obtained from those two matrices, applying the closed-channel elimination procedure [24,26] as discussed in paper I. The total energy E of the system is the sum of the relative kinetic energy of a collision and the energy of the initial state of the target.

The inelastic cross section for the rotational excitation or de-excitation process of a linear molecule by electron impact is obtained from the scattering matrix of Equation (2) where is the Coulomb phase shift. The derivation of the above formula is given in paper II.
In the ground electronic state of HeH, the projection of the electronic angular momentum on the molecular axis of the target is zero. Therefore, for scattering energies below the first excited electronic state of HeH, in Equation (7). Figure 4 gives examples of the cross sections obtained with Equation (7) for the transitions of HeH and HeH. The cross sections exhibit a strong resonant character for both molecular ions as well as for the two other isotopologues. These resonances are washed out when thermally-averaged rate coefficients are computed, leading to similar rate coefficients at high temperatures T, as shown by solid lines in Figure 5 and Figure 6. Similar results are observed for HeD and HeD, shown in the figures by dashed lines. However, the thermally averaged coefficients at low temperatures are sensitive to exact positions and widths of the lowest resonances because the integral over thermal velocities at low temperatures T is determined only by small collision energies, . As a result, the rate coefficients for the transitions, for example, in Figure 5 and Figure 6, are slightly different for different isotopologues.
In addition, the rotational rate coefficients behave approximately according to Equation (4), where should be replaced with the rotational threshold energy, , and a quadratic polynomial is used in the fit. The probabilities for the direct () and the inverse () processes are related to each other by the relative degeneracy factor
The coefficients () are fitted numerically for transitions and are given in Table 7, Table 8, Table 9 and Table 10. Similarly to Tables in Section 3, the coefficients give the rate coefficients in Equation (5) in units of cm/s.

All authors contributed equally to this work.

This research was funded by Grant No. PHY-1806915 of the National Science Foundation, the Thomas Jefferson Fund of the Office for Science and Technology of the Embassy of France in the United States and by the program “Accueil des chercheurs étrangers” of CentraleSupélec.

The authors are grateful to the referees for the constructive comments and improvement suggestions. 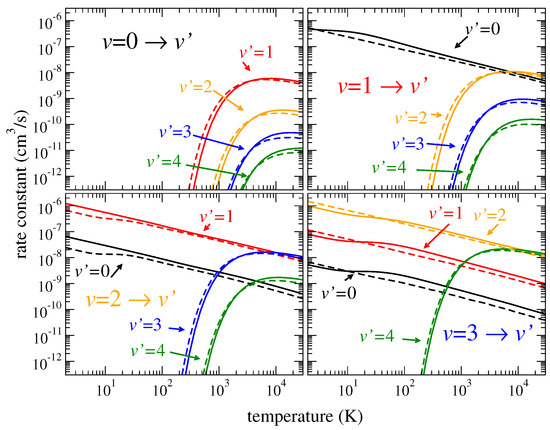 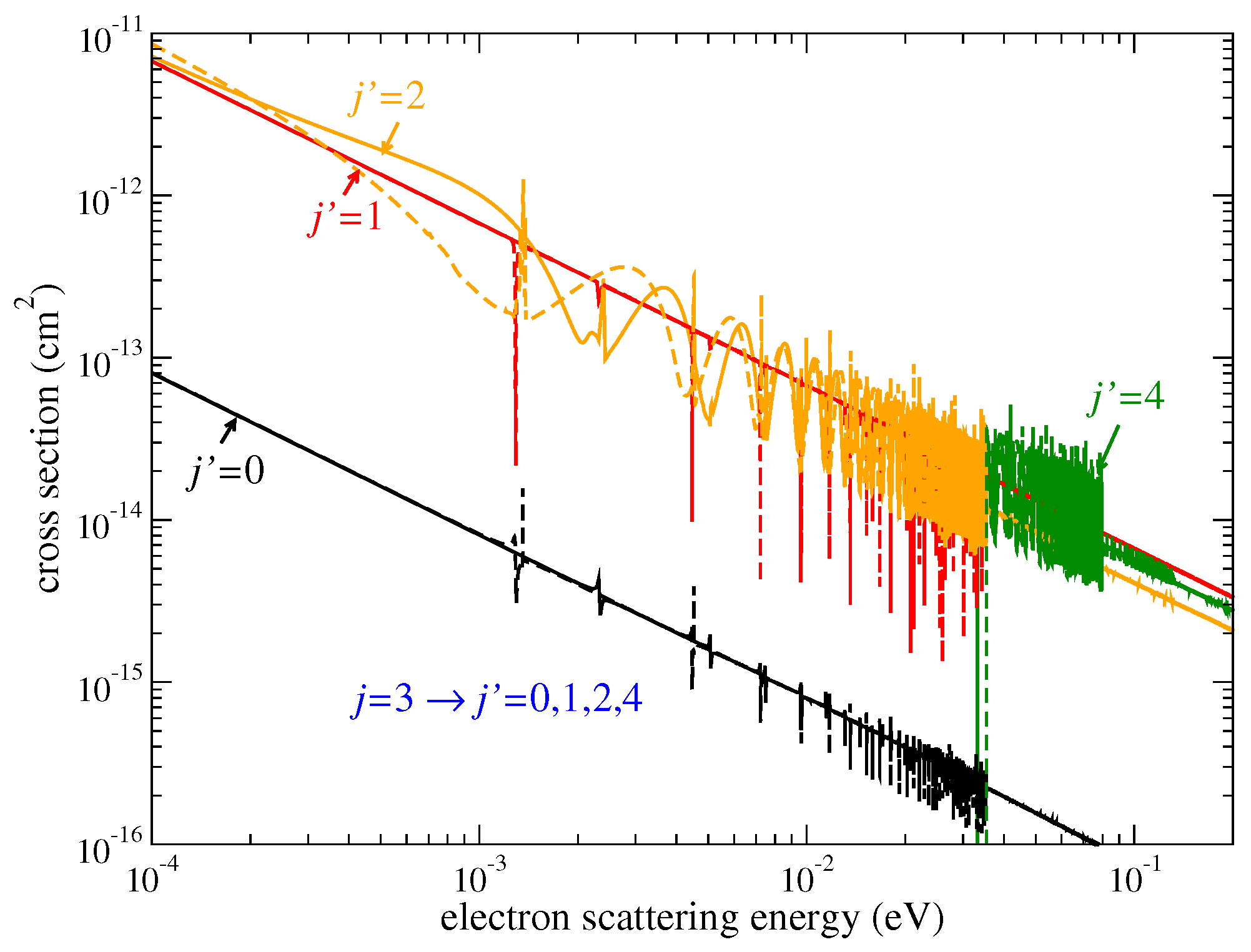 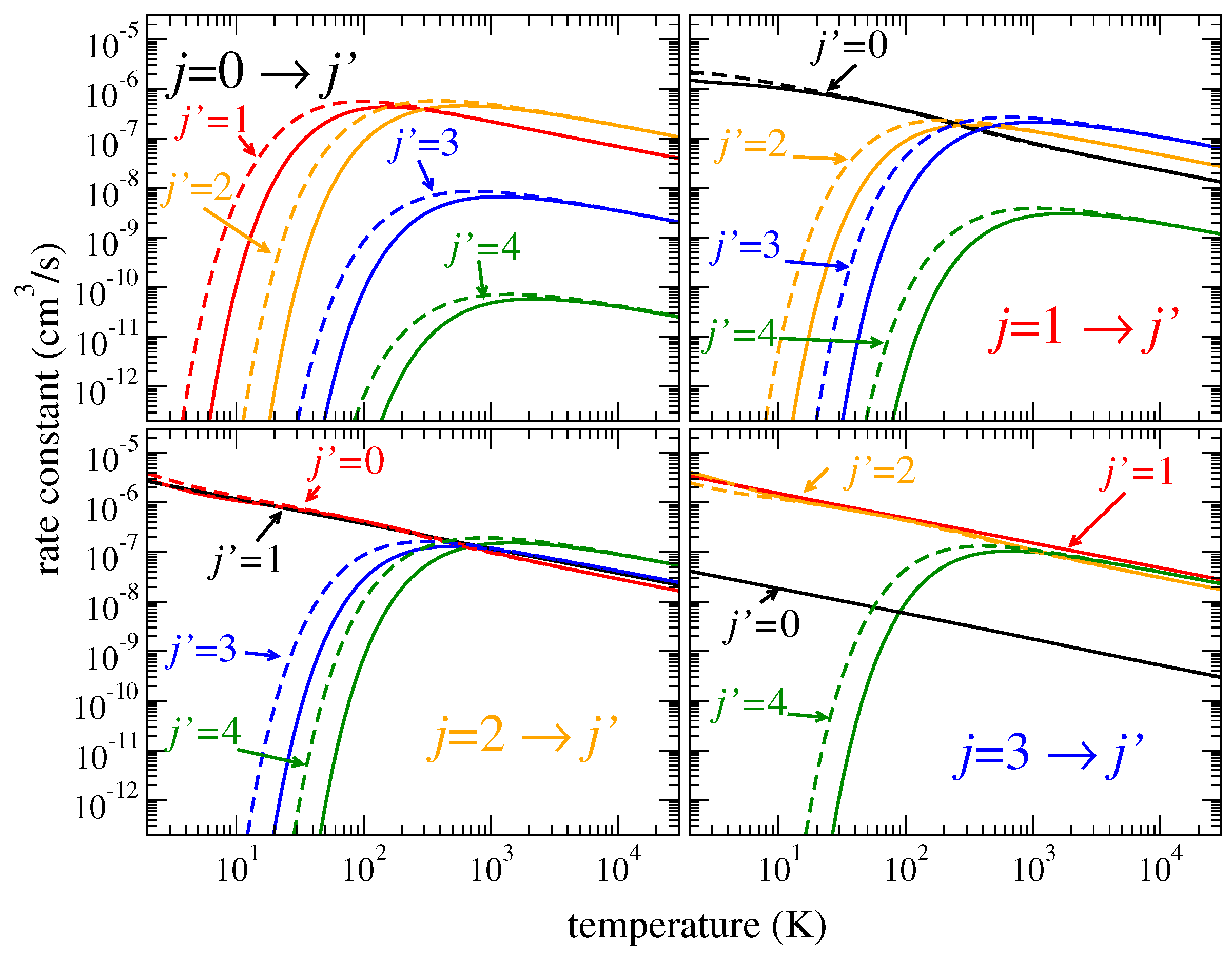 Table 10. Same as Table 7 for HeD.
Table 10. Same as Table 7 for HeD.
© 2019 by the authors. Licensee MDPI, Basel, Switzerland. This article is an open access article distributed under the terms and conditions of the Creative Commons Attribution (CC BY) license (http://creativecommons.org/licenses/by/4.0/).
We use cookies on our website to ensure you get the best experience. Read more about our cookies here.
Accept
We have just recently launched a new version of our website. Help us to further improve by taking part in this short 5 minute survey here. here.
Never show this again