A HERO for General Relativity

A Theory of Inertia Based on Mach’s Principle

A non-relativistic theory of inertia based on Mach’s principle is presented as has been envisaged, but not achieved, by Ernst Mach in 1872. The central feature is a space-dependent, anisotropic, symmetric inert mass tensor. The contribution of a mass element to the inertia of a particle experiencing an acceleration from rest is proportional to , where is the angle between the line connecting and and the direction of the acceleration. Apsidal precession for planets circling around a central star is not a consequence of this theory, thereby avoiding the prediction of an apsidal precession with the wrong sign as is done by Mach-like theories with isotropic inert mass.
Keywords: inertia; Mach’s principle; history of physics inertia; Mach’s principle; history of physics

In 1872 Ernst Mach formulated his famous principle about the inert mass of a particle, which he assumed to be induced somehow by the presence of other masses in the universe [1]. Particularly, Mach criticized Newton’s concept of absolute space as demonstrated by the famous bucket gedankenexperiment which concludes that true rotational motion cannot be defined as the relative rotation of the body with respect to the immediately surrounding bodies. In fact, if a bucket filled with water starts to rotate around its vertical axis, the surface of the water will at first (when the water has not yet started to move) stay flat. After a while, the surface of the water will assume a concave shape as it acquires the motion of the rotating bucket. For Newton this shows that true rotational motion cannot be defined as the relative rotation of a body (here the water) with respect to the immediately surrounding bodies (here the bucket): When there is a relative movement between water and bucket (at the beginning of the experiment), no centrifugal forces act on the water; however, when the relative movement has disappeared (when the water moves synchronously with the bucket) centrifugal forces are there.
However, the argument neglects (gravitational) influence from bodies farther away. In fact, Mach argues that only relative motion is established: “Newton’s experiment with the rotating vessel of water simply informs us that the relative rotation of the water with respect to the sides of the vessel produces no noticeable centrifugal forces, but that such forces are produced by its relative rotations with respect to the mass of the earth and other celestial bodies.” (Ernst Mach, as quoted by [2]).
There are many possible formulations of Mach’s principle (especially in the context of general relativity, [3]), some being considered more strongly Machian than others. Bondi and Samuel have listed eleven statements that can be called Mach principles [4]. For our considerations, the following five formulations are the most relevant:
A rather weak formulation of Mach’s principle is that the motion of matter in one place should affect which frames are inertial in another. Thereby, the inertia of a mass is a phenomenon induced solely by the gravitational influence of other masses. In a universe without gravity there would be also no inertia. Unfortunately, Mach never formulated his ideas as a physical theory.
In this paper, I want to present a theory consistent with Mach’s principle. The theory is non-relativistic. Hence it is more of a historical value, giving what Mach did not (or could not) deliver nearly 150 years ago, when Mach’s ideas were not yet overgrown by Einstein’s theories (which, contrary to Einstein’s hopes and struggles, do not fully incorporate the Mach principle, [4]).
A central aspect of the theory is the anisotropy of the inert mass, which therefore has to become a tensor. In the 1950s, experiments in search of anisotropy of inertia have been performed with negative result [5]. Later, these experiments have been recognized as not suitable, ignoring the fact that locally not only the test particle but all masses (including those of the experimental setup) exhibit the same anisotropy of inertia [6,7]. Different experiments where this effect does not matter are still to be performed.

We start with the following assumptions, which are all very simple and plausible:

A definition of the kinetic energy of a test particle with gravitational mass within a universe with other (gravitational, inertia inducing) masses , which is consistent with all assumptions above is given by (summation convention is used for the spatial indices ): where is a natural constant, presumably connected with Newton’s gravitational constant, is the distance between and , with and the absolute positions of and in space, respectively. Similarly, is the relative (not only radial!) velocity between and (as will be the relative acceleration later on). The sum is over all masses in the universe with the exception of .
The corresponding components of the momentum and force of the test particle are then given by
If and only if we are in a coordinate system where all inducing masses are at rest, we have and the formulae simplify to

Let us now investigate how this definitions fulfil Assumptions 1–5. For this, we do not consider Newtonian gravitation beyond the induction of inertia.
Assumption 1.
Since there exists only and not one single , the are all zero. There is no kinetic energy and no momentum and also no force.
Assumption 2.
For translations at a constant distance, . For (possibly non-uniform) rotations of a mass with constant radius R around a single point mass (or vice versa), we assume , with ω possibly time dependent. Thus we have
With our definitions above one sees easily that and again there is no force (this is also true if and rotate synchronously around some other rotational center, e.g., both being fixed onto one single watch hand). Especially, there are no centripetal or centrifugal forces. (Therefore, the gravitational attraction between the two masses will eventually lead to a collision, regardless if there is a rotation or not.)
Assumption 3.
Anisotropy of inertia is realized in our definition. As an illustration, let us consider a simple experiment involving three masses, see Figure 1. is at rest in . We have two masses , with mass at and mass at ).
After a short calculation, we find (with )
If a force is applied, this will lead to an acceleration of , which is clearly not the same direction as . The * signals the not defined acceleration in the here inertia-free z-direction.
If at the beginning, things become more complicated, since the change of and (the position of relative to the two other masses) gives extra terms leading to .
Assumption 4.
One sees easily that the contribution of each mass to is proportional (besides the dependence on direction) to .
All these considerations can easily be generalized to systems with more masses , where one also has e.g., the absence of kinetic energy and momentum if all masses move uniformly or the absence of centrifugal forces if all masses rotate uniformely without change of relative distances. This corresponds perfectly to Mach’s famous bucket-gedankenexperiment.
Assumption 5.
It is perhaps the most crucial and definitely the most complicated to prove the following. In Appendix A, we will give the detailed calculation (A2). The result for the inert mass tensor of a test particle (resting or moving with constant velocity relative to the sphere) within a thin sphere of radius R and constant area mass density σ (and hence its overall mass) is:
This corresponds to a constant, isotropic inertia independent of the spatial position (as long as within the sphere) and would, therefore, be the physical setting for the emergence of usual Newtonian inertia. The calculation in Appendix A shows that the contribution of a mass element to the inertia of a particle at rest (experiencing an acceleration) is proportional to , where is the angle between the line connecting and and the direction of the acceleration. So if the angle is , there is no contribution of to the inertia, whereas the contribution is maximal if both directions are in parallel. Thus, apsidal precession for planets circling around a central star is not a consequence of this theory (leaving room for additional effects due to general relativity), but it avoids the prediction of an apsidal precession with wrong sign as is done by Mach-like theories with isotropic inert mass (proportional e.g., to the local gravitational potential), [8,9].

In this paper, a non-relativistic theory of inertia based on Mach’s principle was presented. The theory is by no means intended to replace Einstein’s general theory of relativity, e.g., it will not explain perihelion precession of planets since the gravitation of the central star (at this scale nearly a point mass) has barely any influence on the tangential inertia of surrounding objects. However, this theory may come to life at the scale of galaxies and their movement. In any case, the next step will be to (try to) incorporate this theory into general relativity.
The most crucial task would be a proper testing of inert (an)isotropy using experiments which do not rely only on masses (i.e., gravitation and inertia but also e.g., electric fields. Since induced inertia and Newtonian gravitation always come together, interference of both effects may complicate things.

Appendix A. Calculation of M within a Sphere

We start with a test particle at the origin of our coordinate system. This particle is within a thin sphere of constant area mass density with center and radius R (), see Figure A1. We use a coordinate system where this sphere is at rest (which does not mean that the sphere is physically ‘at rest’ as this is meaningless in an otherwise empty universe, see Assumption 1). 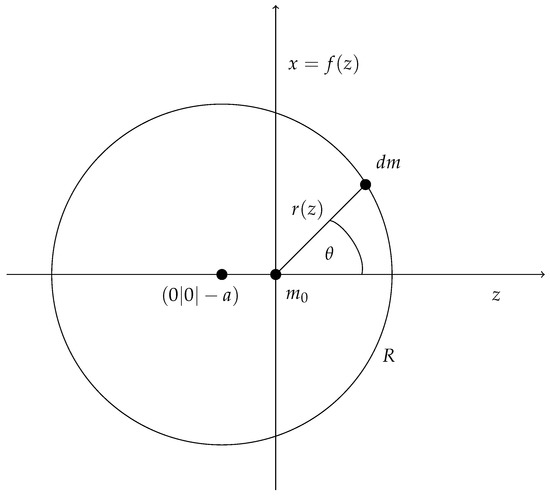 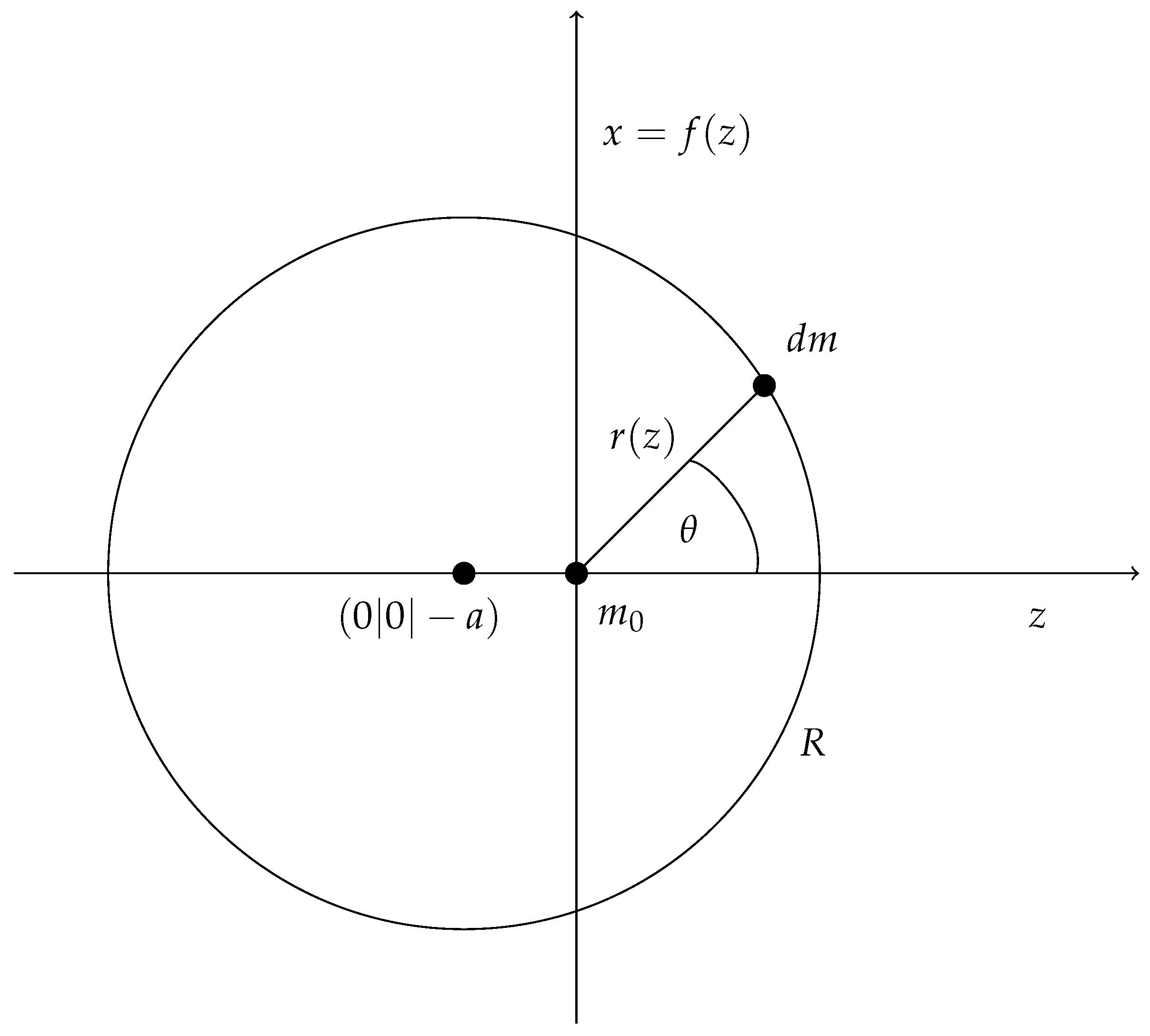 The mass element of the sphere is at point , where
For later use, we want to calculate the gravitational potential within the sphere:
Of course, this result is not at all surprising: The gravitational potential within a hollow sphere of homogeneous mass density is constant, i.e., independent of the position.
We now want to calculate at the coordinate origin (where is located):
With we see immediately that after the -integration the off-diagonal terms are all zero and the diagonal terms yield for the -term and for the other two:
If the movement of the test particle is in the z-direction () then (5) reduces to . One sees that the contribution of a mass element to the inertia is proportional to , where is the angle between the line connecting the test particle with and the direction of test particle’s movement. (Note that )
We start with the -term proportional to . We rewrite: and get: where means the integral without the prefactors. Here we use the well known formula [10] where in our case and (note that the denominator is ):
We notice again and find:
This is exactly one third of what we had before (A1), independent of the test particle’s position within the sphere.
For the - and -component, the integration is easy using with the results from above:
Again, it is exactly of what we had before. In sum, we end up with 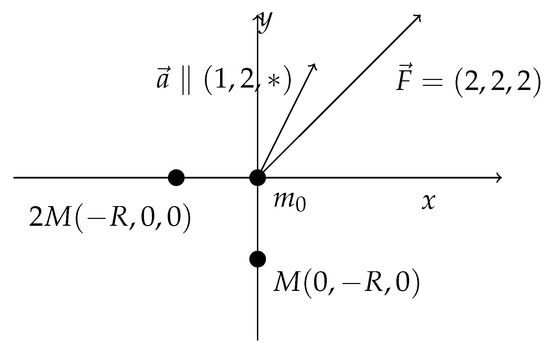 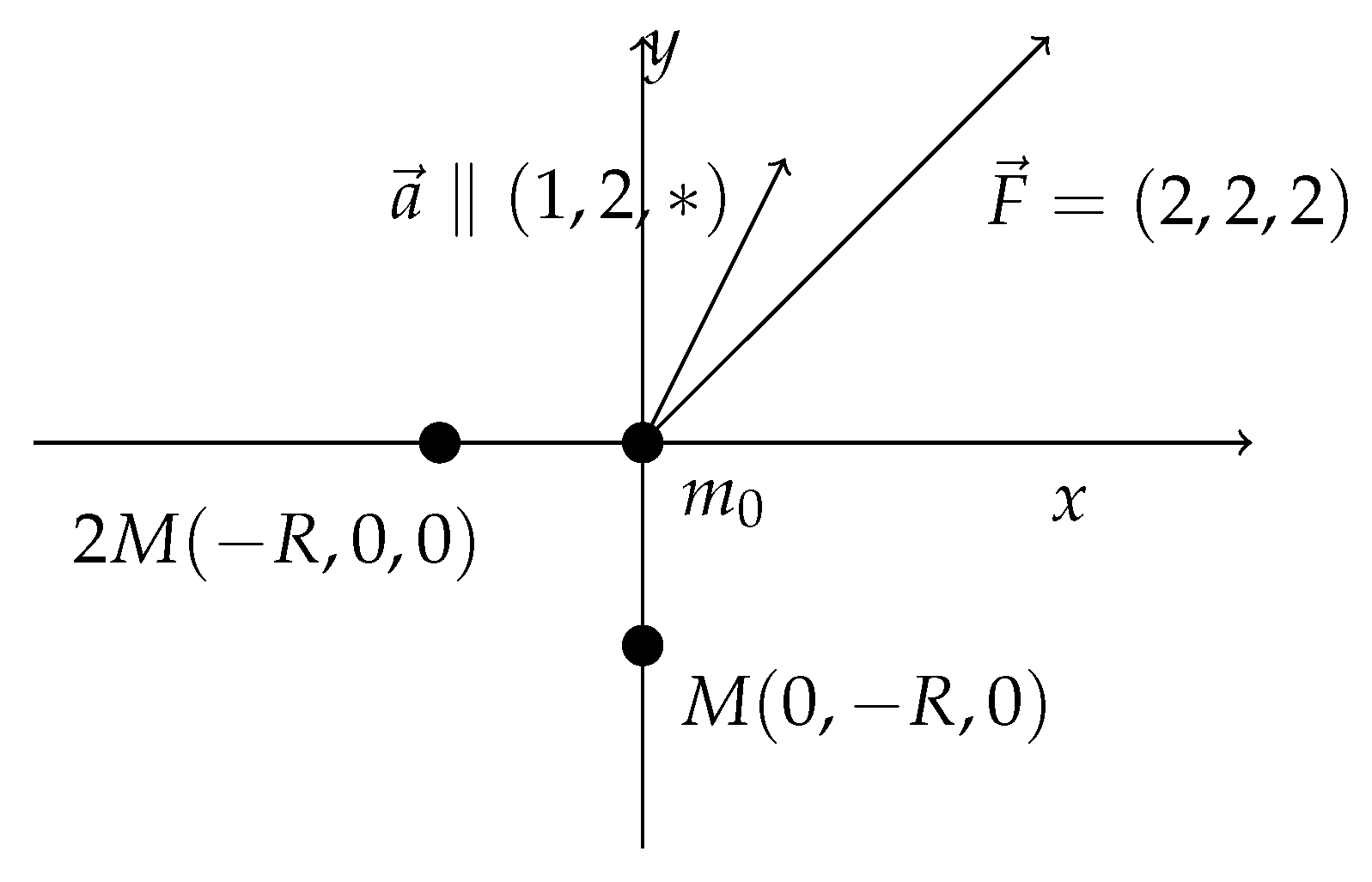