A HERO for General Relativity

HERO (Highly Eccentric Relativity Orbiter) is a space-based mission concept aimed to perform several tests of post-Newtonian gravity around the Earth with a preferably drag-free spacecraft moving along a highly elliptical path fixed in its plane undergoing a relatively fast secular precession. We considered two possible scenarios—a fast, 4-h orbit with high perigee height of and a slow, 21-h path with a low perigee height of . HERO may detect, for the first time, the post-Newtonian orbital effects induced by the mass quadrupole moment of the Earth which, among other things, affects the semimajor axis a via a secular trend of ≃4–12 , depending on the orbital configuration. Recently, the secular decay of the semimajor axis of the passive satellite LARES was measured with an error as little as . Also the post-Newtonian spin dipole (Lense-Thirring) and mass monopole (Schwarzschild) effects could be tested to a high accuracy depending on the level of compensation of the non-gravitational perturbations, not treated here. Moreover, the large eccentricity of the orbit would allow one to constrain several long-range modified models of gravity and accurately measure the gravitational red-shift as well. Each of the six Keplerian orbital elements could be individually monitored to extract the signature, or they could be suitably combined in order to disentangle the post-Newtonian effect(s) of interest from the competing mismodeled Newtonian secular precessions induced by the zonal harmonic multipoles of the geopotential. In the latter case, the systematic uncertainty due to the current formal errors of a recent global Earth’s gravity field model are better than for all the post-Newtonian effects considered, with a peak of for the Schwarzschild-like shifts. Instead, the gravitomagnetic spin octupole precessions are too small to be detectable.
Keywords: general relativity and gravitation; experimental studies of gravity; experimental tests of gravitational theories; satellite orbits general relativity and gravitation; experimental studies of gravity; experimental tests of gravitational theories; satellite orbits

The HERO concept—meant as a hopefully drag-free spacecraft moving in a highly eccentric orbit in a frozen perigee configuration that aimed to perform several tests of relativistic gravity in the Earth’s spacetime—represents, in principle, a promising opportunity to measure a general relativistic effect for the first time, which has never received the same attention as the more well-known Schwarzschild and Lense-Thirring precessions. The post-Newtonian gravitoelectric orbital shifts due to the mass quadrupole moment of the Earth. Indeed, the systematic uncertainty in the combined satellite’s precessions due to the formal, statistical errors in the competing Newtonian mass multipoles of the geopotential—as per one of the most recent global gravity field models—is currently below the per cent level for both the orbital configurations proposed. A unique feature of such a post-Newtonian effect is also that the semimajor axis a undergoes a long-term variation which, for a frozen perigee configuration, resembles a secular trend of the order of ≃4–11 , depending on the orbital geometry chosen. At present, the secular decay of the semimajor axis of the existing passive geodetic satellite LARES has been measured to an accuracy better than at 2σ level. As far as the traditional Lense-Thirring and Schwarzschild-like post-Newtonian precessions, the formal systematic bias due to the present-day mismodeling in the classical Earth’s zonal harmonics is currently and , respectively, if a suitable linear combination of some of the orbital elements of HERO is adopted. However, it must be stressed that the actual uncertainties in the zonal multipoles of the terrestrial gravity field may usually be (much) worse than the sigmas released in the various global gravity solutions. Nonetheless, it cannot be ruled out that, if and when HERO will fly, our knowledge of the Earth’s gravity field will have reached such levels that today’s only formal uncertainties can finally be considered as truly realistic. In addition to the post-Newtonian accelerations, HERO may perform an accurate test of the gravitational red-shift in view of its high eccentricity. Also several models of modified gravity, which generally affect the perigee and the mean anomaly at epoch with secular precessions, could be fruitfully put to the test. A crucial aspect is represented by the level of compensation of the non-gravitational perturbation which will be practically attainable with some drag-free apparatus; suffice it to say that the nominal size of the competing secular decrease of the semimajor axis due to, for example, the neutral atmospheric drag reaching the ≃ 5–160 level if a passive, cannonball satellite is considered. The variability of atmospheric density is such that, in order to achieve drag-free technology, one would have to measure atmospheric density at the satellite in real-time and transmit the data back to Earth for inclusion and analysis within a drag model. Adding such complexities will, however, add to the actual drag as antennas, batteries, solar panels and so forth, and will increase drag and accompanying errors. Perhaps, as the orbit will have to be determined with Satellite Laser Ranging (SLR), one could design and build a type of corner cube reflector where some aspect of the returned SLR pulse is modulated by the atmospheric pressure signal. SLR systems with kHz pulse rates will be useful here. The investigation of such delicate issues deserve dedicated and detailed analyses.

I am grateful to an anonymous referee for insightful observations on the atmospheric drag and the drag-free technology.

Appendix A. Tables and Figures 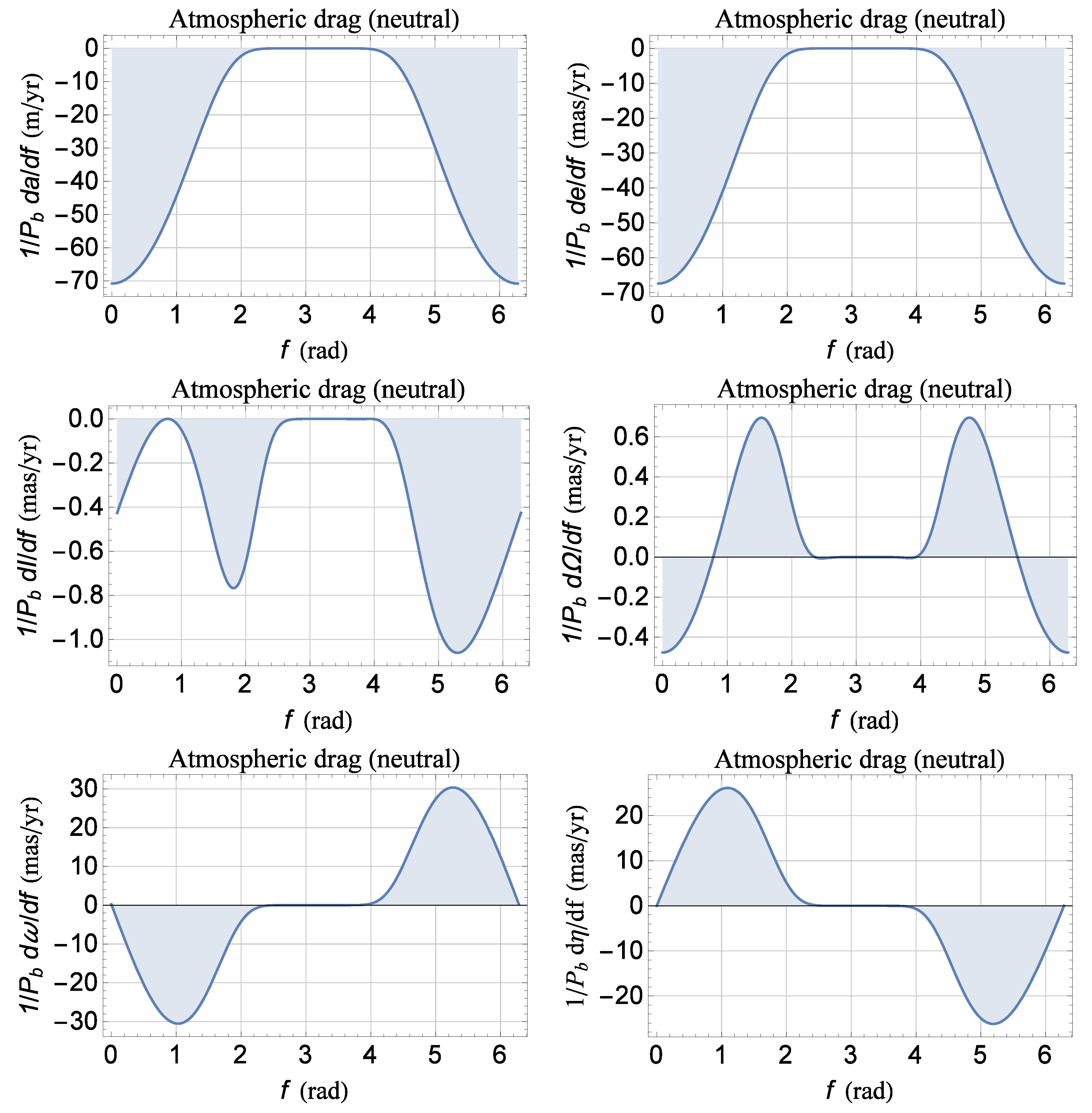 Appendix B. Classical Long-Term Rates of Change of the Keplerian Orbital Elements up to Degree ℓ = 8

Here, we will analytically work out the coefficients of the long-term rates of change of the eccentricity e, the inclination I, the longitude of the ascending node , the argument of perigee , and the mean anomaly at epoch induced by the first seven zonal harmonics of the geopotential up to degree ; the averaged rates of change of the semimajor axis a are all vanishing. We will adopt the Lagrange planetary equations [55,56,57,58] applied to the perturbing potential of degree ℓ where is the Legendre polynomial of degree ℓ, averaged over one orbital period as disturbing function. We will not make any a-priory assumption on the orbital configuration of the satellite. As far as the orientation of the Earth’s spin axis, we will align it to the reference z axis of an equatorial coordinate system. The following formulas include both the genuine secular and the harmonic components with the frequency of the perigee and its integer multiples.

Appendix B.1. The Eccentricity

Appendix B.2. The Inclination

Appendix B.3. The Longitude of the Ascending Node

Appendix B.4. The Argument of Perigee

Appendix B.5. The Mean Anomaly at Epoch