NMR Spectroscopy for Metabolomics Research
Next Article in Special Issue

Most human proteins are glycosylated. Attachment of complex oligosaccharides to the polypeptide part of these proteins is an integral part of their structure and function and plays a central role in many complex disorders. One approach towards deciphering this human glycan code is to study natural variation in experimentally well characterized samples and cohorts. High-throughput capable large-scale methods that allow for the comprehensive determination of blood circulating proteins and their glycans have been recently developed, but so far, no study has investigated the link between both traits. Here we map for the first time the blood plasma proteome to its matching N-glycome by correlating the levels of 1116 blood circulating proteins with 113 N-glycan traits, determined in 344 samples from individuals of Arab, South-Asian, and Filipino descent, and then replicate our findings in 46 subjects of European ancestry. We report protein-specific N-glycosylation patterns, including a correlation of core fucosylated structures with immunoglobulin G (IgG) levels, and of trisialylated, trigalactosylated, and triantennary structures with heparin cofactor 2 (SERPIND2). Our study reveals a detailed picture of protein N-glycosylation and suggests new avenues for the investigation of its role and function in the associated complex disorders. View Full-Text
Keywords: glycomics; proteomics; N-glycosylation; population study; aptamers; HILIC-UPLC; SOMAscan glycomics; proteomics; N-glycosylation; population study; aptamers; HILIC-UPLC; SOMAscan
►▼ Show Figures 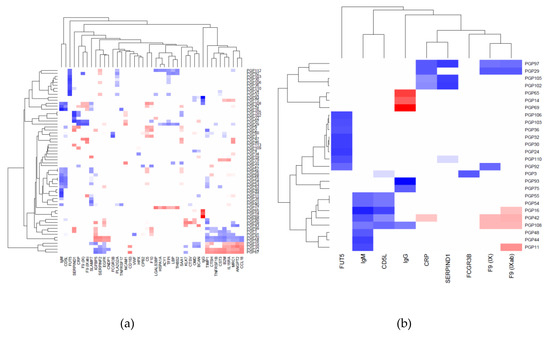