Parasitic weeds of the family Orobanchaceae attach to the roots of host plants via haustoria capable of drawing nutrients from host vascular tissue. The connection of the haustorium to the host marks a shift in parasite metabolism from autotrophy to at least partial heterotrophy, depending on the level of parasite dependence. Species within the family Orobanchaceae span the spectrum of host nutrient dependency, yet the diversity of parasitic plant metabolism remains poorly understood, particularly during the key metabolic shift surrounding haustorial attachment. Comparative profiling of major metabolites in the obligate holoparasite Phelipanche aegyptiaca and the facultative hemiparasite Triphysaria versicolor before and after attachment to the hosts revealed several metabolic shifts implicating remodeling of energy and amino acid metabolism. After attachment, both parasites showed metabolite profiles that were different from their respective hosts. In P. aegyptiaca, prominent changes in metabolite profiles were also associated with transitioning between different tissue types before and after attachment, with aspartate levels increasing significantly after the attachment. Based on the results from 15N labeling experiments, asparagine and/or aspartate-rich proteins were enriched in host-derived nitrogen in T. versicolor. These results point to the importance of aspartate and/or asparagine in the early stages of attachment in these plant parasites and provide a rationale for targeting aspartate-family amino acid biosynthesis for disrupting the growth of parasitic weeds. View Full-Text
Keywords: parasitic plant; heterotrophy; Phelipanche aegyptiaca; Triphysaria versicolor; central carbon and nitrogen metabolism parasitic plant; heterotrophy; Phelipanche aegyptiaca; Triphysaria versicolor; central carbon and nitrogen metabolism
►▼ Show Figures 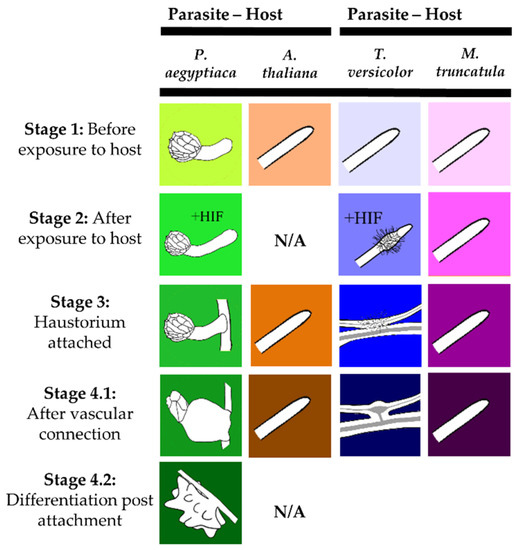