The influence of bovine diet on the metabolome of reconstituted skim milk powder (SMP) and protein ingredients produced from the milk of cows fed on pasture or concentrate-based diets was investigated. Cows were randomly assigned to diets consisting of perennial ryegrass only (GRS), perennial ryegrass/white clover sward (CLV), or indoor total mixed ration (TMR) for an entire lactation. Raw milk obtained from each group was processed at pilot scale, to produce SMP and sweet whey, and SMP was further processed at laboratory scale, to yield ideal whey and acid whey. The total amino acid composition and metabolome of each sample were analyzed, using high-performance cation exchange and a targeted combination of direct-injection mass spectrometry and reverse-phase liquid chromatography–tandem mass spectrometry (LC–MS/MS), respectively. The nitrogen composition of the products from each of the diets was similar, with one exception being the significantly higher nonprotein nitrogen content in TMR-derived skim milk powder than that from the GRS system. Total amino acid analysis showed significantly higher concentrations of glycine in GRS- and CLV-derived sweet whey and acid whey than in those from TMR. The cysteine contents of CLV-derived ideal whey and acid whey were significantly higher than for TMR, while the valine content of GRS-derived acid whey was significantly higher than TMR. The phenylalanine content of GRS-derived ideal whey was significantly higher than that from CLV. Metabolomic analysis showed significantly higher concentrations of the metabolites glutamine, valine, and phosphocreatine in each ingredient type derived from TMR than those from GRS or CLV, while the serine content of each GRS-derived ingredient type was significantly higher than that in TMR-derived ingredients. These results demonstrate that the type of bovine feeding system used can have a significant effect on the amino acid composition and metabolome of skim milk and whey powders and may aid in the selection of raw materials for product manufacture, while the clear separation between the samples gives further evidence for distinguishing milk products produced from different feeding systems based on LC–MS/MS. View Full-Text
Keywords: bovine diet; metabolome; amino acids; skim milk; sweet whey; acid whey; ideal whey bovine diet; metabolome; amino acids; skim milk; sweet whey; acid whey; ideal whey
►▼ Show Figures 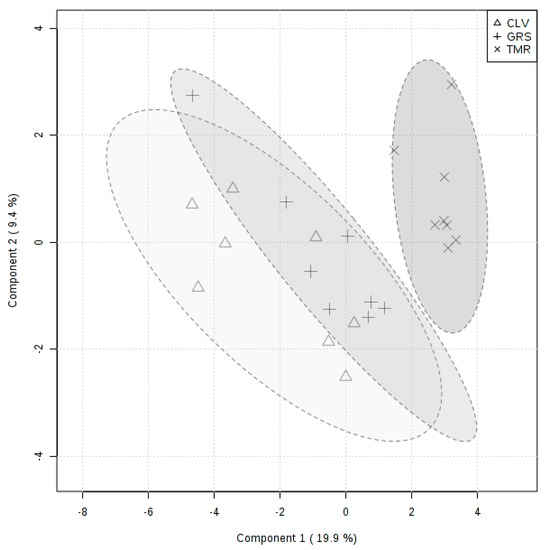