The metabolism and excretion of flavor constituents of garlic, a common plant used in flavoring foods and attributed with several health benefits, in humans is not fully understood. Likewise, the physiologically active principles of garlic have not been fully clarified to date. It is possible that not only the parent compounds present in garlic but also its metabolites are responsible for the specific physiological properties of garlic, including its influence on the characteristic body odor signature of humans after garlic consumption. Accordingly, the aim of this study was to investigate potential garlic-derived metabolites in human urine. To this aim, 14 sets of urine samples were obtained from 12 volunteers, whereby each set comprised one sample that was collected prior to consumption of food-relevant concentrations of garlic, followed by five to eight subsequent samples after garlic consumption that covered a time interval of up to 26 h. The samples were analyzed chemo-analytically using gas chromatography-mass spectrometry/olfactometry (GC-MS/O), as well as sensorially by a trained human panel. The analyses revealed three different garlic-derived metabolites in urine, namely allyl methyl sulfide (AMS), allyl methyl sulfoxide (AMSO) and allyl methyl sulfone (AMSO2), confirming our previous findings on human milk metabolite composition. The excretion rates of these metabolites into urine were strongly time-dependent with distinct inter-individual differences. These findings indicate that the volatile odorant fraction of garlic is heavily biotransformed in humans, opening up a window into substance circulation within the human body with potential wider ramifications in view of physiological effects of this aromatic plant that is appreciated by humans in their daily diet. View Full-Text
Keywords: garlic; human urine; gas-chromatography mass-spectrometry/olfactometry; allyl methyl sulfide; allyl methyl sulfoxide; allyl methyl sulfone garlic; human urine; gas-chromatography mass-spectrometry/olfactometry; allyl methyl sulfide; allyl methyl sulfoxide; allyl methyl sulfone
►▼ Show Figures 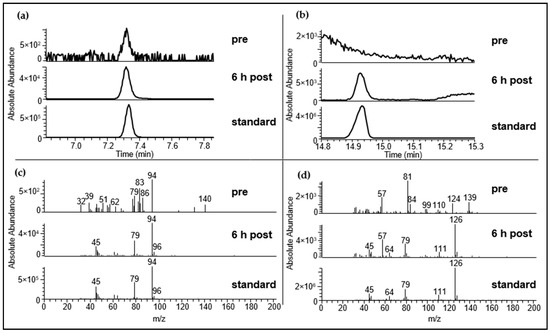