Recent Applications of Metabolomics Toward Cyanobacteria
Previous Article in Journal

Characterisation of the Metabolites of 1,8-Cineole Transferred into Human Milk: Concentrations and Ratio of Enantiomers

1,8-Cineole is a widely distributed odorant that also shows physiological effects, but whose human metabolism has hitherto not been extensively investigated. The aim of the present study was, thus, to characterise the metabolites of 1,8-cineole, identified previously in human milk, after the oral intake of 100 mg of this substance. Special emphasis was placed on the enantiomeric composition of the metabolites since these data may provide important insights into potential biotransformation pathways, as well as potential biological activities of these substances, for example on the breastfed child. The volatile fraction of the human milk samples was therefore isolated via Solvent Assisted Flavour Evaporation (SAFE) and subjected to gas chromatography-mass spectrometry (GC-MS). The absolute concentrations of each metabolite were determined by matrix calibration with an internal standard, and the ratios of enantiomers were analysed on chiral capillaries. The concentrations varied over a broad range, from traces in the upper ng/kg region up to 40 µg/kg milk, with the exception of the main metabolite α2-hydroxy-1,8-cineole that showed concentrations of 100–250 µg/kg. Also, large inter- and intra-individual variations were recorded for the enantiomers, with nearly enantiomerically pure α2-hydroxy- and 3-oxo-1,8-cineole, while all other metabolites showed ratios of ~30:70 to 80:20. View Full-Text
Keywords: metabolism; human milk; gas-chromatography mass-spectrometry; cyclodextrin; enantiomers; chiral chromatography metabolism; human milk; gas-chromatography mass-spectrometry; cyclodextrin; enantiomers; chiral chromatography
►▼ Show Figures 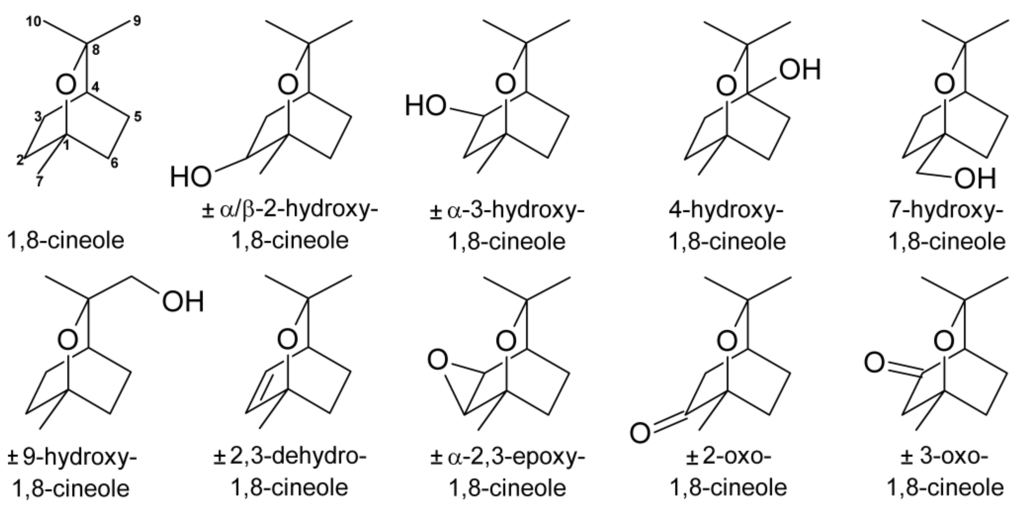