Glutathione (GSH) and glutathione disulfide (GSSG) are commonly used to assess the oxidative status of a biological system. Various protocols are available for the analysis of GSH and GSSG in biomedical specimens. In this study, we present an optimized protocol for the in situ derivatization of GSH with N-ethylmaleimide (NEM) to prevent GSH autooxidation, and thus to preserve the GSH/GSSG ratio during sample preparation. The protocol comprises the incubation of cells in NEM containing phosphate buffered saline (PBS), followed by metabolite extraction with 80% methanol. Further, to preserve the use of QTOF-MS, which may lack the linear dynamic range required for the simultaneous quantification of GSH and GSSG in non-targeted metabolomics, we combined liquid chromatographic separation with the online monitoring of UV absorbance of GS-NEM at 210 nm and the detection of GSSG and its corresponding stable isotope-labeled internal standard by QTOF-MS operated with a 10 Da Q1 window. The limit of detection (LOD) for GS-NEM was 7.81 µM and the linear range extended from 15.63 µM to 1000 µM with a squared correlation coefficient R2 of 0.9997. The LOD for GSSG was 0.001 µM, and the lower limit of quantification (LLOQ) was 0.01 µM, with the linear (R2 = 0.9994) range extending up to 10 µM. The method showed high repeatability with intra-run and inter-run coefficients of variation of 3.48% and 2.51% for GS-NEM, and 3.11% and 3.66% for GSSG, respectively. Mean recoveries of three different spike-in levels (low, medium, high) of GSSG and GS-NEM were above 92%. Finally, the method was applied to the determination of changes in the GSH/GSSG ratio either in response to oxidative stress in cells lacking one or both monocarboxylate transporters MCT1 and MCT4, or in adaptation to the NADPH (nicotinamide adenine dinucleotide phosphate) consuming production of D-2-hydroxyglutarate in cells carrying mutations in the isocitrate dehydrogenase genes IDH1 and IDH2. View Full-Text
Keywords: glutathione; glutathione disulfide; cell culture; liquid chromatography; UV detection; mass spectrometry glutathione; glutathione disulfide; cell culture; liquid chromatography; UV detection; mass spectrometry
►▼ Show Figures 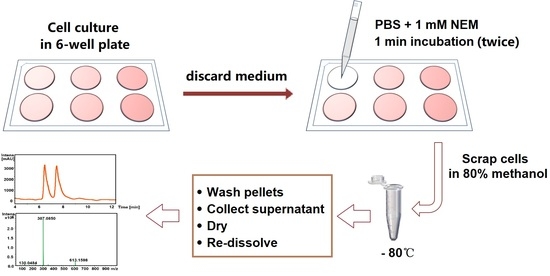