We have previously reported that squalene overproducing yeast self-downregulate the expression of the ethanol pathway (non-essential pathway) to divert the metabolic flux to the squalene pathway. In this study, the effect of co-production of squalene and ethanol on other non-essential pathways (fusel alcohol pathway, FA) of Saccharomyces cerevisiae was evaluated. However, before that, 13 constitutive promoters, like IRA1p, PET9p, RHO1p, CMD1p, ATP16p, USA3p, RER2p, COQ1p, RIM1p, GRS1p, MAK5p, and BRN1p, were engineered using transcription factor bindings sites from strong promoters HHF2p (−300 to −669 bp) and TEF1p (−300 to −579 bp), and employed to co-overexpress squalene and ethanol pathways in S. cerevisiae. The FSE strain overexpressing the key genes of the squalene pathway accumulated 56.20 mg/L squalene, a 16.43-fold higher than wild type strain (WS). The biogenesis of lipid droplets was stimulated by overexpressing DGA1 and produced 106 mg/L squalene in the FSE strain. AFT1p and CTR1p repressible promoters were also characterized and employed to downregulate the expression of ERG1, which also enhanced the production of squalene in FSE strain up to 42.85- (148.67 mg/L) and 73.49-fold (255.11 mg/L) respectively. The FSE strain was further engineered by overexpressing the key genes of the ethanol pathway and produced 40.2 mg/mL ethanol in the FSE1 strain, 3.23-fold higher than the WS strain. The FSE1 strain also self-downregulated the expression of the FA pathway up to 73.9%, perhaps by downregulating the expression of GCN4 by 2.24-fold. We demonstrate the successful tuning of the strength of yeast promoters and highest coproduction of squalene and ethanol in yeast, and present GCN4 as a novel metabolic regulator that can be manipulated to divert the metabolic flux from the non-essential pathway to engineered pathways.
Keywords: Saccharomyces cerevisiae; engineered promoters; repressible promoters; squalene; fusel alcohol; ethanol Saccharomyces cerevisiae; engineered promoters; repressible promoters; squalene; fusel alcohol; ethanol
►▼ Show Figures 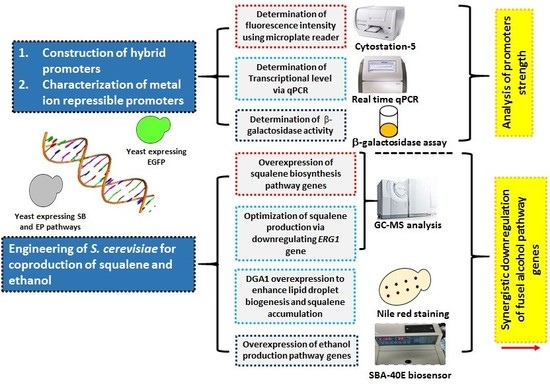