Although cancer has historically been regarded as a cell proliferation disorder, it has recently been considered a metabolic disease. The first discovery of metabolic alterations in cancer cells refers to Otto Warburg’s observations. Cancer metabolism results in alterations in metabolic fluxes that are evident in cancer cells compared with most normal tissue cells. This study applied protein expressions of normal and cancer cells to reconstruct two tissue-specific genome-scale metabolic models. Both models were employed in a tri-level optimization framework to infer oncogenes. Moreover, this study also introduced enzyme pseudo-coding numbers in the gene association expression to avoid performing posterior decision-making that is necessary for the reaction-based method. Colorectal cancer (CRC) was the topic of this case study, and 20 top-ranked oncogenes were determined. Notably, these dysregulated genes were involved in various metabolic subsystems and compartments. We found that the average similarity ratio for each dysregulation is higher than 98%, and the extent of similarity for flux changes is higher than 93%. On the basis of surveys of PubMed and GeneCards, these oncogenes were also investigated in various carcinomas and diseases. Most dysregulated genes connect to catalase that acts as a hub and connects protein signaling pathways, such as those involving TP53, mTOR, AKT1, MAPK1, EGFR, MYC, CDK8, and RAS family. View Full-Text
Keywords: oncogene; flux balance analysis; cancer cell metabolism; tissue-specific metabolic models; constraint-based modeling; multi-level optimization oncogene; flux balance analysis; cancer cell metabolism; tissue-specific metabolic models; constraint-based modeling; multi-level optimization
►▼ Show Figures 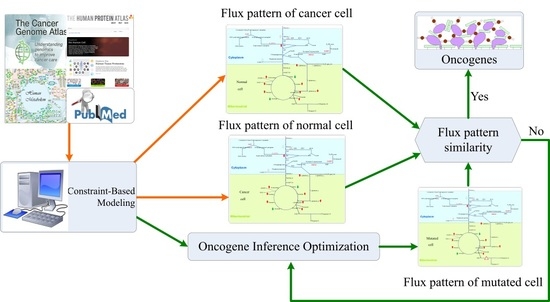