Effectiveness of Platelet-Rich Plasma in the Treatment of Androgenic Alopecia Compared to Placebo and Topical Minoxidil: A Systematic Review

:
Platelet-rich plasma (PRP) has become an increasingly popular alternative or additional method in treating androgenic alopecia (AGA). AGA is a multifactorial disease, in which testosterone plays a significant role in influencing hair growth. The aim of this study was to evaluate the effectiveness of PRP treatment in AGA affecting men and women. The research was performed using the following databases: PubMed, Embase, and Cochrane Library. The effects were measured with a TrichoScan by comparing the initial and final hair density. A significant difference was observed between the areas of the scalp where PRP injections were made and those where saline was administered. Compared to conventional minoxidil 5% topical PRP, PRP is more effective in treating alopecia. A beneficial outcome of combined therapy with PRP and minoxidil 5% was observed. Therefore, PRP is not only an excellent alternative for patients in whom the minoxidil 5% topical monotherapy did not bring the expected effects or who experienced unacceptable side effects, but can also be used as a complementary therapy.
Keywords:
alopecia; androgenic alopecia; platelet-rich plasma; PRP; treatment

Androgenic alopecia (AGA) is a polygenetic condition characterized by progressive non-scarring hair loss due to hair follicle miniaturization. In men, specific locations include temporal and vertex areas, while the occipital region is usually spared. In women, on the other hand, diffuse thinning of hair is usually observed [1] (Figure 1). According to epidemiological data, AGA prevails in the Caucasian population, where it affects approximately 80% of men and 50% of women [1]. Although AGA is a multifactorial condition, androgens play an important role in its pathophysiology. Dihydrotestosterone (DHT) is a metabolite of testosterone produced by 5-alpha-reductase. Type 2 of 5-alpha-reductase is found in the outer root sheath of hair follicles and is instrumental in AGA [2]. Androgen receptors (AR) have two domains—one responsible for binding a ligand (in this case, androgen hormones) and the second for DNA binding. Activation of the AR leads to exposure of androgen-sensitive genes, including gene controlling the hair growth cycle [3].
Female and male androgenetic alopecia present with different clinical patterns. In women, the expression of 5-alpha-reductase is decreased compared to men, which results in less severe hair loss. In men, mainly temporal and parietal areas are affected, while in women, a diffuse pattern of hair loss would be observed [4].
Conventional AGA treatments include therapies approved by the Food and Drug Administration (FDA), i.e., 5% topical minoxidil, 5-alpha-reductase inhibitors (finasteride), and low-level light therapy (LLLT) [5]. Minoxidil leads to vasodilation secondary to potassium channel opening and smooth muscle relaxation. Higher blood flow increases the level of growth factors in the dermal papilla (DP) [1]. Finasteride is a per os drug that inhibits type II 5-alpha-reductase, while dutasteride inhibits both I and II types [6]. However, using these drugs carries a specific risk of sexual dysfunction [7]. Low-level light therapy increases hair density, but its exact mechanism is unknown [1].
Other therapeutic alternatives include off-label options such as androgen receptor antagonists, prostaglandin analogs, and ketoconazole.
Androgen receptor antagonists include spironolactone, cyproterone acetate, and flutamide. There are not enough data providing information on the effectiveness of these agents in patients without hyperandrogenism in the treatment of AGA, and they are also highly teratogenic [1].
Prostaglandin F (PGF) analogs are used in eyelash hypotrichosis as they prolong anagen phases. High levels of prostaglandin D (PGD) and its synthetase were discovered in the scalp of men suffering from AGA [8]. These data imply that prostaglandins play an important role in hair growth and a proper balance between PGF and PGD is needed.
Ketoconazole is an antifungal agent that interferes with steroidogenesis affecting androgen levels. It is often used topically in combination with finasteride to produce an additional decrease in DHT in the scalp [1].
Novel therapies include stem cells, scalp micro-needling, Wnt signaling, JAK-STAT signaling, and platelet-rich plasma (PRP) injections [9].
PRP is a blood-derivative previously used in thrombocytopenia treatment [10]. Over time, when the regeneration-stimulating effect of PRP was observed, it began to be used in many other fields of medicine, including orthopedics, gynecology, dermatology, urology, and ophthalmology [11]. Current dermatology applications include hair loss treatment, wound healing improvement, skin rejuvenation and scar appearance improvement [12].
To obtain PRP, citrated whole blood is used in the centrifugation process, which prevents coagulation. The addition of anticoagulant enables treatment providers to obtain liquid PRP [13]. After centrifugation, blood is divided into three layers: red blood cells (RBC) and leukocytes, PRP, and platelet-poor plasma (PPP) [14] (Figure 2).
A high concentration of autologous platelets is present in a small quantity of plasma after centrifugation of the patient’s blood. Alpha granules in the platelets induce stem cell regeneration and promote remodeling of soft tissue. There are many growth factors in alpha granules of thrombocytes, such as platelet-derived growth factors (PDGF), vascular endothelial growth factor (VEGF), epithelial growth factor (EGF), transforming growth factor-beta (TGF beta), and insulin-like growth factor (IGF) [15]. The mitogenesis and differentiation of monocytes, fibroblasts, stem cells, keratinocytes, and endothelial cells occurs due to growth factors in the PRP alpha granule [12].

This systematic review was conducted according to the PICOS criteria and PRISMA protocol (registered in the PROSPERO database for systematic reviews under 353692).
Patient (P): Men and women in all the stages of AGA based on the Norwood scale
Intervention (I): PRP subcutaneous scalp injections
Control (C): Compared with placebo
Outcome of interest (O): Male and female pattern hair loss
Study design (S): randomized clinical trials with placebo control
Focused question: Is PRP more effective in treating AGA than topical 5% minoxidil and placebo?
Search strategy: The reviewer performed computerized, systematic research using the following databases:
PubMed, EMBASE, and Cochrane Library using the following BOOLEAN operators:
“Platelet AND Rich AND Plasma” OR “androgen AND alopecia” OR “androgen AND hair loss” OR “PRP AND treatment” OR “treatment AND androgenic AND alopecia” OR “Platelet AND Rich AND Plasma AND injections” OR “baldness” OR “male AND pattern AND hair AND loss”.

The investigator performed quality control of pre-qualified studies using the inclusion and exclusion criteria. The risk of bias was assessed as low based on a common classification scheme for bias. The research was performed in November 2021 and updated in August 2022.
The study was included if it met the following inclusion criteria: hair loss clinically typical for AGA, randomized clinical trial with placebo control, PRP injections, published in English, at least three treatment sessions, and at least 30-day follow-up, with outcomes measured in hair density.
Exclusion criteria: meta-analysis, systematic reviews, books, case reports, in vitro studies, animal experiments, lack of negative control, hair loss different than AGA, group of participants smaller than 10, studies published prior to 2011.
The search strategy resulted in 153 articles with a full-text review of 35 studies. Twenty-two studies were clinical trials but did not meet other inclusion criteria such as number of interventions, number of participants, and outcome measurement (Figure 3).

PRP in treatment of AGA was previously assessed in systematic reviews, many of which implied that due to heterogenous results of clinical trials, there is not sufficient evidence on its effectiveness [29]. Due to strict inclusion criteria, the number of studies included in this systematic review was limited. In addition to the assessment of the quality of studies, excluding studies with the number of procedures below 3 and insufficient follow-up period allowed us to evaluate PRP treatment as a therapy consisting of repeated procedures. In our opinion, the inclusion criteria mentioned above are crucial for proper assessment of its effectiveness.
PRP subcutaneous scalp injections are an effective method in the treatment of AGA in men and women. All the studies included in this review revealed a positive impact in the verum group compared to the baseline.
The exact mechanism of action is still unknown and some studies suggest that the platelet count and growth factors concentration are not the crucial factors increasing hair density. Nevertheless, it may be concluded that PRP is a good alternative for patients whose treatment with topical minoxidil did not bring the desired effect or resulted in unacceptable side effects.

Data available from the corresponding author on request. 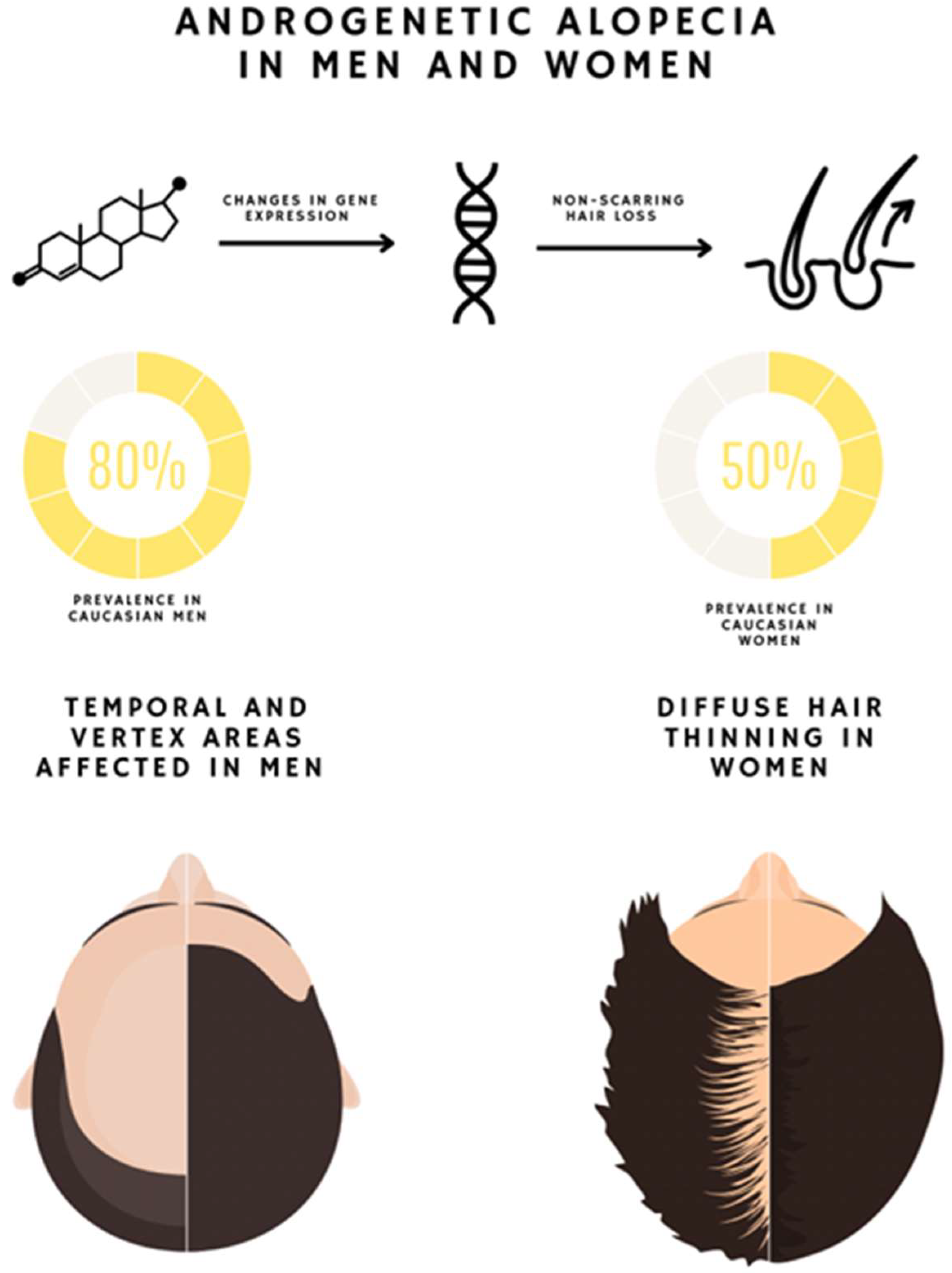