Ameliorating Effect of Combined Cinnamon and Ginger Oils against the Neurotoxicity of Nicotine Administration on the Prefrontal Cortex of Adult Albino Rats: Immunohistochemical and Ultrastructural Study

Background: Nicotine is the active alkaloid in cigarettes. It was reported that tobacco smoking has many hazards; one of these hazards is the effect on the cognitive function of the prefrontal cortex. The aim of our study is to investigate the antioxidant effects of ginger, cinnamon oils, and their combination on morphological changes in the prefrontal cortex that were induced by nicotine. Materials and methods: Fifty adult male albino rats were divided into five groups: group I (control group), group II (nicotine), group III (nicotine + cinnamon), group IV (nicotine + ginger), and group V (nicotine + cinnamon + ginger). The coronal sections from the anterior part of the rat brain at the site of prefrontal cortex were examined by light microscope for (H&E and immunohistochemical staining with TNF-α and GFAP), while the ultrastructure morphology was examined by transmission electron microscopy. Levels of the oxidative stress markers (MDA, GSH) in the rats’ brain tissue homogenate were biochemically assessed. Results: Compared to the control group, the rats that were treated with nicotine (group II) showed a significant oxidative stress in the form of marked elevation of MDA and decrease in GSH, apoptotic changes especially in the pyramidal cells in the form of neuronal cell degeneration and pyknosis, and an elevation in the inflammatory marker TNF-α and GFAP expressions. These changes were observed to a lesser degree in rat group (III) and group (IV), while there was a marked improvement achieved by the combined usage of cinnamon and ginger oils, together compared to the nicotine group. Conclusions: Ginger and cinnamon are powerful antioxidants which ameliorate the degenerative and oxidative effects produced by nicotine on a rat’s prefrontal cortex. View Full-Text
Keywords: nicotine; ginger; cinnamon; prefrontal cortex; GFAP; TNF-α nicotine; ginger; cinnamon; prefrontal cortex; GFAP; TNF-α
►▼ Show Figures 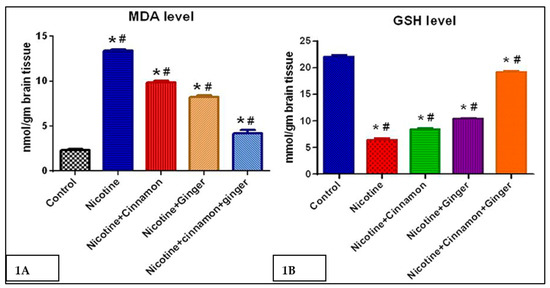