Association of Antibiotic Use with the Resistance Epidemiology of Pseudomonas aeruginosa in a Hospital Setting: A Four-Year Retrospective Time Series Analysis

Background: Even though, Pseudomonas aeruginosa is a common cause of hospital-acquired infections, treatment is challenging because of decreasing rates of susceptibility to many broad-spectrum antibiotics. Methods: Consumption data of eight broad spectrum antimicrobial agents and resistance rates of P. aeruginosa were collected for 48 consecutive months. Autoregressive integrated moving average (ARIMA) and transfer functions models were used to develop relationships between antibiotic use and resistance. Results: Positive correlations between P. aeruginosa resistance and uses of ciprofloxacin (p < 0.001), meropenem (p < 0.001), and cefepime (p = 0.005) were identified. Transfer function models showed the quantified effect of each of these antibiotics on resistance. Regarding levofloxacin, ceftazidime, piperacillin/tazobactam and imipenem, no significant relationships were found. For ceftazidime and levofloxacin, this was probably due to their low consumption, while for imipenem the reason can possibly be ascribed to the already high established P. aeruginosa resistance in the hospital. Conclusion: In the hospital setting, the effect of antimicrobial agents’ consumption on the susceptibility epidemiology of P. aeruginosa differs significantly for each one of them. In this study, the role of precedent use of meropenem, cefepime and ciprofloxacin was quantified in the development of P. aeruginosa resistance. View Full-Text
Keywords: antimicrobial stewardship; antibiotic resistance; pseudomonas aeruginosa; time series analysis; dynamic regression models antimicrobial stewardship; antibiotic resistance; pseudomonas aeruginosa; time series analysis; dynamic regression models
►▼ Show Figures 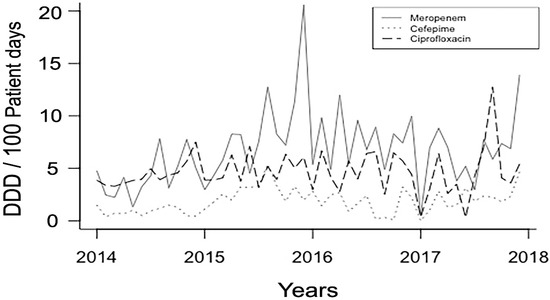