The aim of this study was to investigate the acute and subchronic toxicity of a film formulation that combines κ-Carrageenan and konjac glucomannan for soft capsule application. For the acute toxicity study, a dose of 2000 mg/kg body weight (bw) of the film suspension was administered orally to rats. The animals were observed for toxic symptoms and mortality daily for 14 days. In a subchronic toxicity study, the film suspension, at doses of 10, 30 and 75 mg/kg bw for 28 days, were orally administered to rats. After 28 days, the rats were sacrificed for hematological, biochemical and histological examination. In the acute toxicity study, neither signs of toxicity nor death among the rats were observed for up to 14 days of the experimental period. The results of the subchronic toxicity study show that there were no significant changes observed in the hematology and organ histology. Some alterations to the relative organ weight and blood biochemistry were observed, but they were considered to be temporary effects and not an indication of toxic effects. The overall findings of this study indicate that the film formulation of κ-Carrageenan and konjac glucomannan is non-toxic up to a dose of 75 mg/kg bw, which could be considered a safe dose for soft capsule application.
Keywords: κ-Carrageenan; Konjac Glucomannan; soft capsule; toxicity κ-Carrageenan; Konjac Glucomannan; soft capsule; toxicity

Capsules are an alternative to tablets for the oral delivery of therapeutic compounds. Capsule shells, available as hard or soft shells, are formulated from gelatin or a non-gelatin polymeric material. Market analysis of encapsulated medications and biologically active dietary supplements indicates that attention need to be paid to the search for alternatives to the traditionally used gelatin. This factor determines the relevance of the development of technology for the production of capsules from hydrocolloids of plant origin [1,2]. A combination of κ-Carrageenan, an anionic sulfated linear polysaccharide extracted from red seaweed, and konjac glucomannan, a natural hydrocolloid gum derived from the tubers of Amorphophallus konjac K. Koch, could potentially be used in soft capsule formulation due to their synergic interaction. The addition of konjac glucomannan to κ-carrageenan based gels is often employed in food applications to decrease syneresis, reduce brittleness and increase the linear regime elastic modulus [3]. The ratio of konjac glucomannan to κ-carrageenan is responsible for the texture and rheological properties of the system. An excess of konjac glucomannan reinforces the elastic network and increases the fracture strain and stress considerably [3,4]. Carrageenan has been associated with the induction and promotion of intestinal neoplasms and ulceration in numerous animal experiments. Nevertheless, based on short- and long-term studies of toxicology reviewed by the Joint FAO/WHO Expert Committee on Food Additives (JECFA), it was concluded that carrageenan is safe to consume, although the recommended Acceptable Daily Intake is “not specified” for carrageenan [5]. The toxicology of carrageenan is related to the unique chemical structure of carrageenan. It can be categorized as “undegraded” or high molecular weight carrageenan and “degraded” or low molecular weight carrageenan, which is associated with an inflammatory effect. The degradation of carrageenan through depolymerization may be due to acidic exposure. The cytotoxic study on κ-carrageenan concluded that degraded κ-carrageenan inhibited cell proliferation in four types of cell line. However, no cytotoxic effect was found in undegraded carrageenan [6]. To determine the safety of κ-carrageenan film with konjac glucomannan formulation for soft capsule application, film suspension was administered to rats for oral acute and subchronic toxicity studies. The subchronic toxicity study was conducted for 28 days, during which the film suspension was orally administered, and after 28 days toxicity parameters such as body weight changes, relative organ weight, hematology and clinical biochemistry profiles, and organ histopathology were examined.

Normal female Wistar rats were used for acute toxicity study. Normal male and female Wistar rats were used for the subchronic (28-day) study. The animals were 6–8 weeks old, and were stabilized for seven days prior to the experiments. They were acclimatized at room temperature, with 12 h light and 12 h dark cycle, as well as free access to a standard pellet diet and water ad libitum. During acclimatization, the rats were randomized into experimental and control groups. All experimental procedures were in compliance with the Guide for the Care and Use of Laboratory Animals and approved by the local animal care committee, The Health Research Ethic Committee of Faculty of Medicine Universitas Padjajaran Bandung with ethical approval no 418/UN6.C1.3.2/KEPK/PN/2016.

An acute oral toxicity study was performed according to the Organization of Economic Co-operation and Development (OECD) guideline 420 for testing a chemical [7]. Five female rats were used. A test suspension of 20% (200 mg/mL) in purified water was orally administered only once at a single dose of 2000 mg/kg bw, whereas the control group only received 2 mL of purified water as a vehicle. All rats were then granted free access to food and water, observed for any signs of acute toxicity for 24 h with special attention to the first 4 h and once daily for 14 days.

A subchronic oral toxicity study was preformed according to the Organization of Economic Co-operation and Development (OECD) guideline 407 for testing a chemical [8]. The animals were randomly divided as follows: Group 1 (control) and Group 4 (high dose) contained 10 animals/sex/group, and Group 2 (low dose) and Group 3 (middle dose) contained 5 animals/sex/group. At the end of the 28-day treatment period, 5 animals/sex/group were necropsied. The remaining 5 animals/sex/group in Group 1 and Group 4 remained untreated for up to 14 days (satellite group). At the end of the recovery period, they were necropsied. All animals were fasted overnight prior to necropsy and euthanized by carbon dioxide inhalation. Relative organ weights, hematological and biochemical profiles were determined.
The target doses for Groups 1–4 were 0, 10, 30, and 75 mg film/kg bw/day, respectively. The dose levels were selected based on the dose conversion in soft capsule application. The film will be applied for human use as an 8-oblong soft capsule with a 250 mg weight/capsule/day dosage, which is equivalent to 4.166 mg/kg bw. The middle dose was converted by the following calculation:
The low and high doses were set as 1/3- and 2.5-fold of the middle dose, respectively. These doses were selected based on the dose level guideline of OECD 407, which states that 2–4-fold intervals are frequently optimal for setting the descending dose levels.
The test substances were prepared as the water suspension of chopped film at a concentration of 2, 6 and 15 mg/mL, for the low (10 mg/kg bw), middle (30 mg/kg bw) and high doses (75 mg/kg bw), respectively, to deliver not more than 2 mL of it to each testing animal. Visual observation of the test substances indicated that the water suspension of chopped film was stable for 7 days at room temperature without changes viscosity of suspension.

The body weight of each rat was weighed before the test, weekly during the study and on the day of sacrifice. All animals were observed daily for mortality and their general condition.

Blood samples were collected from a cardiac puncture in a non-heparinized tube, and then centrifuged at 10,000 rpm for 5 min. A serum was separated and analyzed for biochemical parameters on a Photometer 5010 V5+ based on an enzymatic colorimetric test, including blood glucose, cholesterol, triglyceride, aspartate aminotransferase (AST), alanine aminotransferase (ALT), blood urea and blood creatinine. The blood glucose determination was performed according to the method of Barham and Trinder [9]. The total cholesterol was determined by the CHOD-PAP (Cholesterol oxidase/p-aminophenazone) method [10]. Triglyceride was determined by the GPO-PAP (Glycerol-3-phosphate oxidase/p-aminophenazone) method [11]. Aspartate Amino Transferase (AST) and Alanine Amino Transferase (ALT) were determined by the kinetic method for the determination of AST and ALT activities according to the recommendation of the expert panel of the International Federation of Clinical Chemistry (IFCC) [12,13]. Creatinine was determined by the Jaffe reaction, based on a colorimetric test for kinetic determination of creatinine at 25 °C and 37 °C without deproteinization [14]. Blood urea was determined by the Berthelot method.

The organs, namely, the liver, heart, spleen, lung and kidney, were carefully excised and preserved in a fixation medium of 10% buffered formalin for histopathological study. The organ paraffin section was prepared, stained with hemotoxylin and eosin and processed for a light microscope fitted with an optilab viewer [15]. The histopathology study was conducted at the Histopathology Laboratory, The department of pathology and anatomy, Faculty of Medicines, Universitas Padjajaran, Bandung.

Data were expressed as mean ± standard deviation (SD) and analyzed statistically by a one-way Analysis of Variance (ANOVA). Then, Tukey’s post hoc test compared the results with the control group using statistical software SPSS version 23, and p < 0.05 was considered to be different to a statistically significant degree.

In all five female testing animals, signs of neither toxicity nor death among the rats were observed during the 14 days of the acute toxicity experimental period, after the administration of a single oral dose of the testing suspension of 2000 mg/kg bw. The body weight measurement resulted in an average body weight of 193.20 ± 7.43, 204.20 ± 8.29, and 211.00 ± 8.83 g for Days 1, 7 and 14, respectively. The body weight gradually increased within normal range of body weight gain. After 14 days of treatment, all tested animals were subjected to gross necropsy with no abnormality of organs observed in the macroscopic observation. This result suggests that the film formulation of κ-carrageenan with konjac glucomannan was not toxic, after an acute exposure.

Neither deaths nor obvious clinical signs of toxicity in the rats were observed for all groups, including the group that received the highest tested dose of 75 mg/kg bw.

Table 1 and Table 2 show the relative organ weights of the male and female rats after 28 days of administration of the film suspension. The relative organ weight of each organ evaluated and calculated at necropsy in the treatment groups did not show a significant difference (p > 0.05) compared to the control, except for the seminal vesicles at a dose of 75 mg/kg bw for male rats and the liver at a dose of 75 mg/kg bw for female rats. A significant reduction of the relative weight of the seminal vesicles at a high dose of the test substance was observed. The relative liver weight of female rats in the 75 mg/kg bw group increased compared to the control group (p < 0.05).

Figure 1 and Figure 2 show the histopathology profile of male and female rats after 28 days of the administration of the film suspension. Light microscopic examination of the section of various organs, namely, the kidney, liver, heart, spleen and lung of rats from the control group and those treated with a low dose (10 mg/kg bw), medium dose (30 mg/kg bw) and high dose (75 mg/kg bw), showed a normal histology.

Based on the results of the current study, we may conclude that the film formulation that combines κ-carrageenan and konjac glucomannan was well tolerated up to a 75 mg/kg bw dose when orally administered to Wistar rats. The glucose, cholesterol and triglyceride changes in the treatment groups were considered to be temporary effects of the film suspension administration, because a normal result was achieved after two weeks of discontinuation of the test substance. Cumulatively, these data suggest that the film formulation poses a low potential health risk but further study on its chronic toxicity should be undertaken to seek the effect of chronic exposure to film formulation.

This research was funded by the Higher Education DP2M through the Decentralized Research scheme (Universities Excellent Research) ITB 2016. 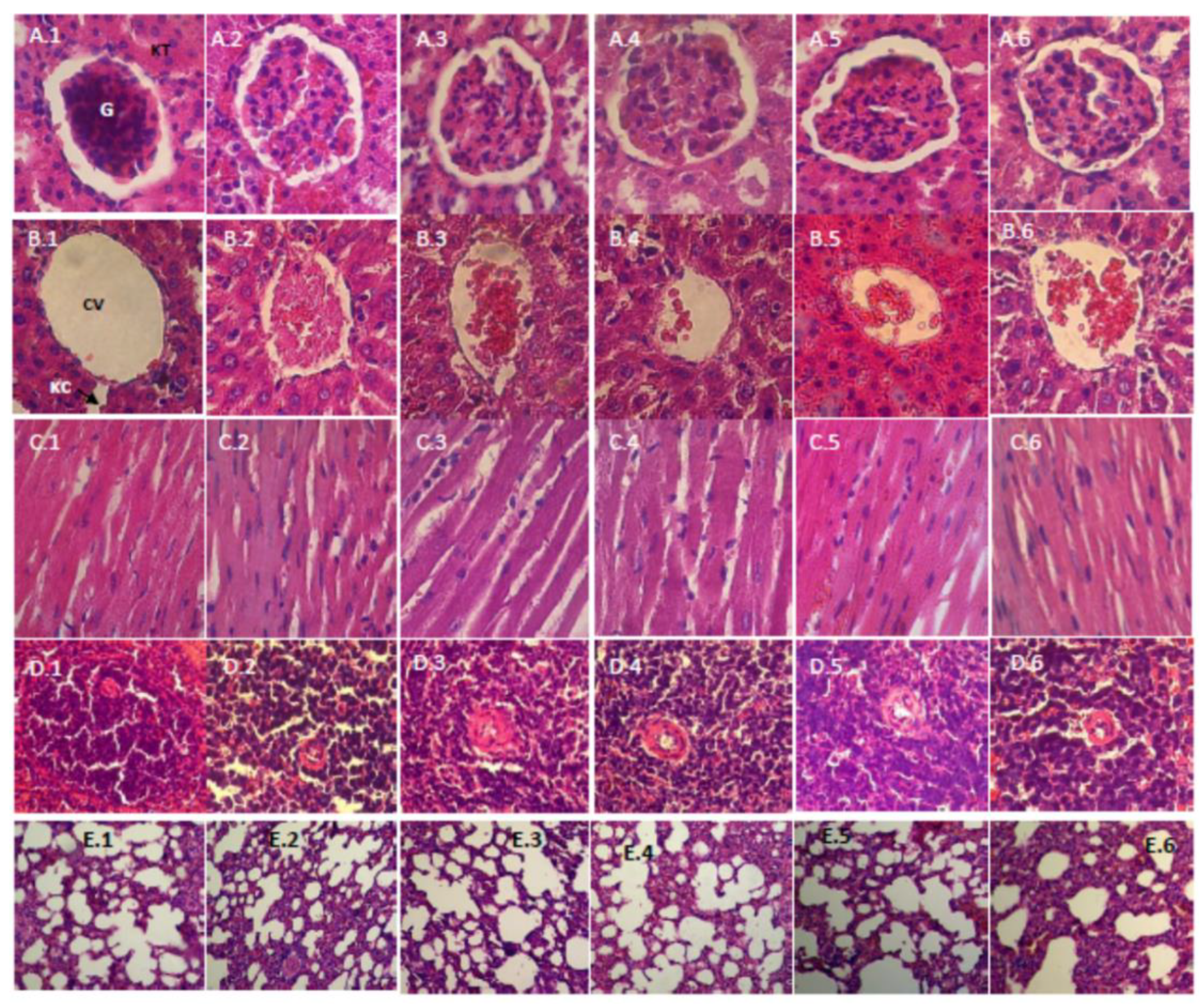 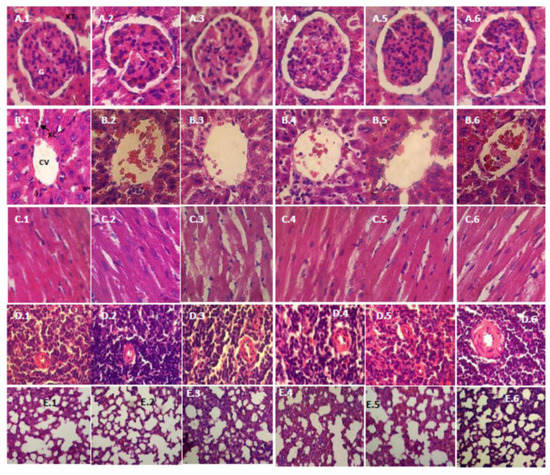 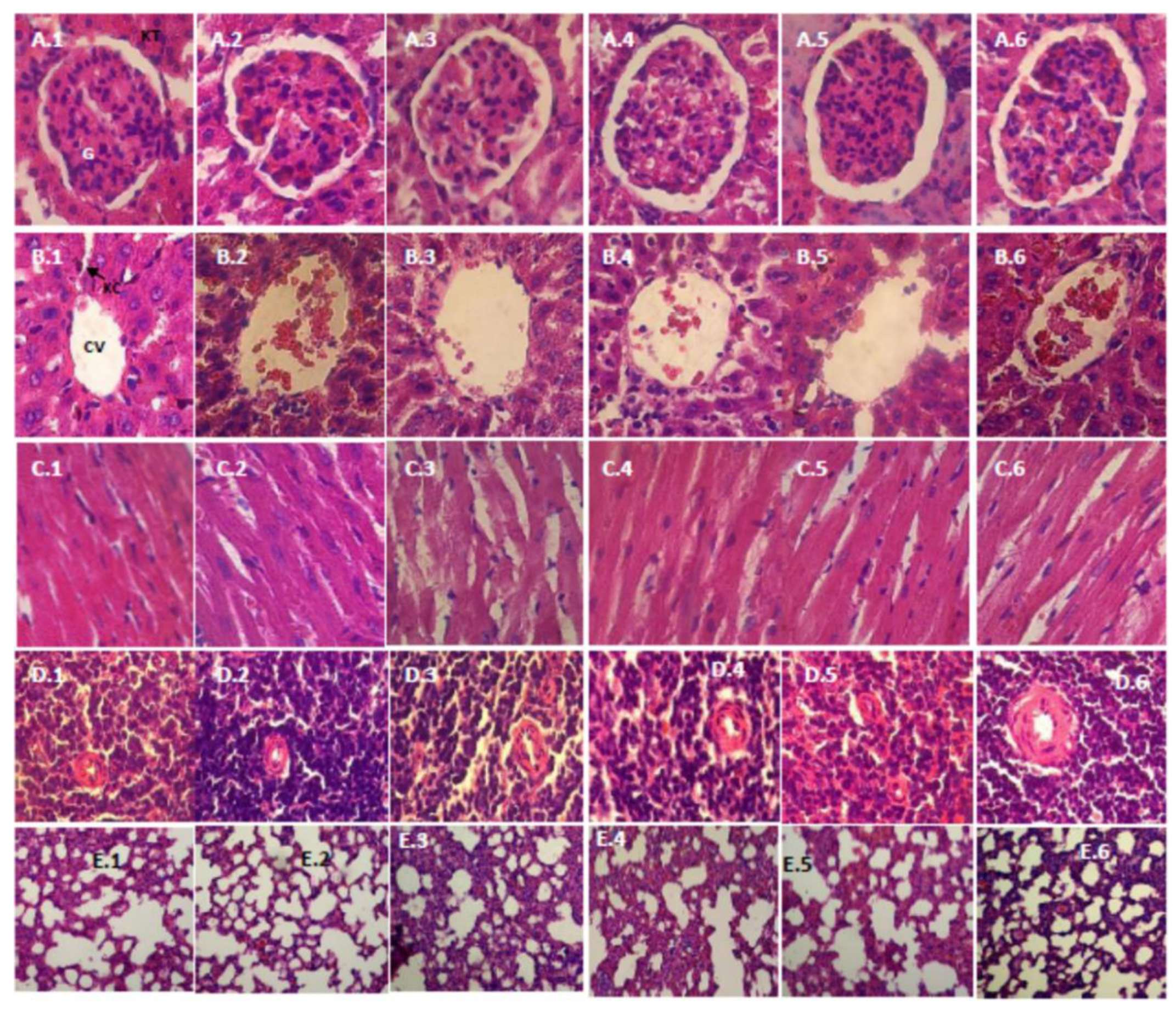