A Comparative Pharmacokinetics Study of the Anti-Parkinsonian Drug Pramipexole

The influence of fragrances such as perfumes and room fresheners on the psychophysiological activities of humans has been known for a long time, and its significance is gradually increasing in the medicinal and cosmetic industries. A fragrance consists of volatile chemicals with a molecular weight of less than 300 Da that humans perceive through the olfactory system. In humans, about 300 active olfactory receptor genes are devoted to detecting thousands of different fragrance molecules through a large family of olfactory receptors of a diverse protein sequence. The sense of smell plays an important role in the physiological effects of mood, stress, and working capacity. Electrophysiological studies have revealed that various fragrances affected spontaneous brain activities and cognitive functions, which are measured by an electroencephalograph (EEG). The EEG is a good temporal measure of responses in the central nervous system and it provides information about the physiological state of the brain both in health and disease. The EEG power spectrum is classified into different frequency bands such as delta (0.5–4 Hz), theta (4–8 Hz), alpha (8–13 Hz), beta (13–30 Hz) and gamma (30–50 Hz), and each band is correlated with different features of brain states. A quantitative EEG uses computer software to provide the topographic mapping of the brain activity in frontal, temporal, parietal and occipital brain regions. It is well known that decreases of alpha and beta activities and increases of delta and theta activities are associated with brain pathology and general cognitive decline. In the last few decades, many scientific studies were conducted to investigate the effect of inhalation of aroma on human brain functions. The studies have suggested a significant role for olfactory stimulation in the alteration of cognition, mood, and social behavior. This review aims to evaluate the available literature regarding the influence of fragrances on the psychophysiological activities of humans with special reference to EEG changes. View Full-Text
Keywords: aroma; brain wave; electroencephalography; fragrance; psychophysiology aroma; brain wave; electroencephalography; fragrance; psychophysiology
►▼ Show Figures 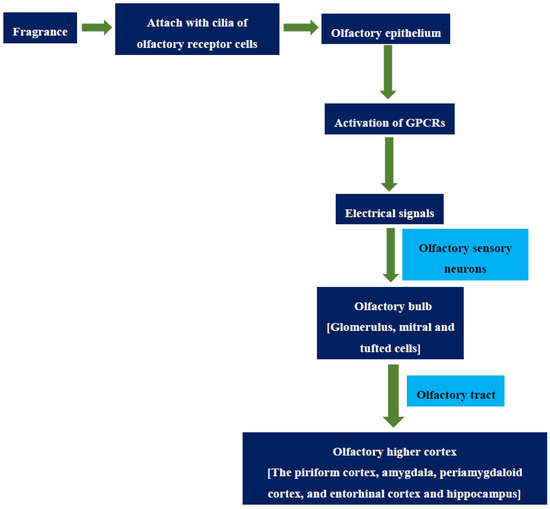