The Role of Natural and Human Resources on Economic Growth and Regional Development: With Discussion of Open Innovation Dynamics
Previous Article in Journal

Does Open Innovation Enhance a Large Firm’s Financial Sustainability? A Case of the Korean Food Industry

This study investigates the effect of environmental moisture conditions on the calculated incident radiant heat flux (irradiance) by plate thermometers (PT). Alterations were made to the moisture content of the PT insulation layers to achieve these conditions. Irradiance was calculated using a pre-determined equation based on fully insulated conditions and validated using a Schmidt-Boelter radiometer. The study consisted of two phases; (i) investigating the effect of preheating PT to the accurate irradiance, (ii) investigating the effect of moisture in the PT on the measurement of irradiance. Calculated irradiance agreed with measured for preheated PT, but not with unheated PT. Four representative moisture conditions were identified for phase two, whereby samples were equilibrated at 0, 45, 65, and 98 wood moisture equivalent (%WME). No noticeable difference identified between measured and calculated irradiance was detected within 0–65%WME. PT with 98%WME showed a difference between the irradiance as the moisture inside the PT insulation absorbed energy from the PT to vaporize. Therefore, using preheated PT with any %WME under 65 is recommended to obtain accurate enough irradiance measurements. The result can use to improve determining the fire spread mechanisms and accurate measurements of irradiance in outdoor fires such as informal settlements fires.
Keywords: incident radiant heat flux; moisture content; plate thermometer; fire test incident radiant heat flux; moisture content; plate thermometer; fire test

Heat transfer in a fire scenario significantly affects the strength and performance of structural components such as beams, columns, and slabs. For instance, heat can alter the mechanical properties such as strength and stiffness of the material of these and can weaken even the noncombustible materials [1]. Therefore, it is critical to appropriately define the thermal environment to which these components are exposed, to estimate their structural performance in fire conditions.
More than 30% of the urban population lives in informal settlements and the size of which is currently increasing. Often, the structures of the above settlements are extremely vulnerable to fires due to combustible construction materials and limited access to fire services [2]. Further, the density of housing is so high that an extremely fast fire spread is typically observed; fire incidents in informal settlements is even analogous to wildfires [3]. To understand this disastrous fire spread phenomenon, real-scale fire tests with mockup informal settlements have been conducted outdoors [4].
To measure both total and incident radiant heat flux, commercially available heat flux sensors such as Schmidt-Boelter gauges and Gardon gauges have been used traditionally by fire safety researchers [5]. Both gauge types require cooling water to maintain relatively constant surface temperature by removing absorbed heat continuously. However, using such gauges can be often impractical for outdoor fire tests such as those for informal settlements where continuous water supply is not available. As the need for a more robust and less cumbersome alternative to the water-cooled gauges became apparent, the researchers have used the existing plate thermometer (PT) which was originally developed to measure the harmonized furnace temperatures in fire resistance tests to calculate the incident radiant heat flux. While PTs show reasonably accurate performance, their calculation accuracy has not been investigated associated with the outdoor environmental condition, especially the humidity.
The purpose of the current study is to identify whether the calculated incident radiant heat flux of PTs is influenced by the environmental moisture conditions. To achieve this goal, moisture contents of the insulation layers of the PT were altered, mimicking the changing environmental moisture content. Schmidt-Boelter type heat flux gauges were used to calibrate the PTs when pre-defined equations were used to calculate the incident radiant heat flux.

The common types of industrial gauges used to measure both total and incident radiant heat flux are the “water-cooled total heat flux gauge” (WCTHG) and the “water-cooled radiometer” (WCRM). WCRM only allows radiant heat transfer through a highly transparent window, but not convective heat transfer. These gauges can measure incident radiant heat flux up to 200 kW/m2 [6]. While providing very good accuracy, they have limited applications especially in outdoor fire tests due to water supply and associated tubing required.

Moisture can reside inside a cell structure in two main forms: free moisture and bound water. Free moisture rests in cell lumens and cavities while the bound moisture rests within the cell walls [12,13]. To quantify the moisture inside a substance, the moisture content percentage (%MC) is introduced as the ratio between the mass of moisture and the mass of solids in the same volume as shown in Equation (2) [14].
To determine the %MC inside the insulation layers, a pin-type moisture probe in the thermo-hygrometer (OMEGA™ RH 700) was used. This instrument gives the output in the unit of the “Wood Moisture Equivalent” percentage (%WME), which is the moisture content that would be measured if the material were wood [15]. The conversion formula for %WME and %MC material has been developed as in Equation (3) below.
Relative humidity (RH), the ratio between the actual and saturated moisture density in the atmosphere, and the temperature are the two main factors that affect the internal moisture level of any material exposed to an environment. Once the porous material is exposed to an environment, it absorbs moisture from the environment, and eventually, the moisture content inside the material reaches equilibrium with the environment, known as “Equilibrium Moisture Content” (%EMC) [16,17]. A correlation between %EMC, RH, and the temperature was developed by Hailwood & Horrobin [16,18]. The value of %EMC represents the maximum %MC for that particular material for that atmospheric conditions. The %EMC in steady-state environmental conditions was plotted against increasing RH at 27 °C and is given in Figure 2. The figure shows that the range of %EMC generally falls between 0% and 30% in any given ambient environment.

Liu, et al. [8], introduced a new method to determine incident radiant heat flux; instead of focusing the heat loss from the metal plate, a new surface temperature to be calculated when the PT having perfect insulation conditions, denoted as Ts-ideal. This temperature is always higher than the measured surface temperature as it has to compensate for the heat losses and the uncertainties associated with the PT such as thermocouple welding, thermocouple wire heat conduction, etc. The energy balance equation for the PT: Equation (1), can be modified as shown in Equation (4) by introducing the Ts-ideal to compensate for the heat losses.

An experimental setup was developed to determine the incident radiant heat flux by measuring the PT’s front surface temperature corresponding to different atmospheric weather conditions. The PT was configured accordingly by manipulating the moisture level of the insulation layers along with the varying heat flux applied to the PT surface. The study was mainly categorized into two different phases.
In the first phase, an unheated (or freshly-made) PT, and WCRM were subjected to incident radiant heat flux from the cone calorimeter heater (manufactured by Fire Testing Technology, West Sussex, UK) and increased its temperature gradually from 200 °C to 900 °C in 100 °C increments. The same procedure was followed for the preheated PT as well. The internal bonds within the insulation layers made of ceramic fiber were deemed to be degraded if the PT is preheated.
The second phase is about different moisture levels: 0, 45, 65, and 98 (measured in %WME) in the insulation layers of the preheated PT. Possible minimum humidity or 0%WME was achieved by drying the PT inside a furnace (manufactured by Thermo Fisher Scientific, Waltham, MA, USA) at 60 °C until the moisture content of the insulation layers reached 0%WME. To achieve 45% and 65%WME, insulation layers were kept on a stand inside a sealed plastic container filled with water up to 40 mm level for 9–12 h and approximately 24 h, respectively. By this method, insulation layers absorb moisture evenly from the exposed surfaces as it happens in the normal environment. The insulation layers were prepared for 98%WME to imitate raining conditions in a wet humid day. This situation was created by dropping a few water droplets on the insulation layers since, in actual raining conditions, rainwater will create high water concentration in a smaller area.
This respective %MC for the selected %WME can be calculated using Equation (3) as 0, 87, 125, and 188 by taking the wood density as 0.520 g/cm3. Then, the prepared PTs and WCRM were positioned under the cone calorimeter heater and followed the same procedure in phase one.

The purpose of the current study is to investigate the effect of moisture content in the PT insulation on the incident radiant heat flux calculations. The study was conducted in two phases; (i.) unheated PT against preheated PT, (ii.) manipulating the moisture levels inside the PT. Preheated PT was used to develop the calibration equation. As a result, preheated PT provides sufficiently accurate results compared to fresh-made PT. In the second phase, four moisture conditions were compared equivalent to 0%, 45%, 65%, and 98%WME. Considering the relationship between RH and %WME, the values of 45%, 65%, and 98%WME are deemed to contain more moisture than the equilibrium with a 100% RH. The findings of the second phase showed that the incident radiant heat flux calculated using PT having 0 to 65%WME does not deliver any noteworthy difference from that of the WCRM. Instead, PT with 98%WME showed a noticeable difference between the incident radiant heat flux values as the moisture inside the insulation layers absorbs heat from PT to vaporize. We recommend the use of preheated PT in any environmental moisture conditions for accurate enough incident radiant heat flux measurement given that no water droplets have been added to the PT.
The PT has been used to measure the incident radiant heat flux in the fire engineering community and showed a promising performance, specifically outdoor fire tests to study the fire spread phenomena for informal settlements or wildfires. The current study is expected to contribute to minimizing concerns on the measurement accuracy of PTs in varying ambient humidity conditions in outdoor fire tests.

This research received no external funding, but the APC was funded by the Fire Protection and Safety Engineering Technology Excellence Funds in Oklahoma State University.

The authors have no conflicts of interest to declare. All co-authors have seen and agreed with the contents of the manuscript and there is no financial interest to report. We certify that the submission is original work and is not under review at any other publication. 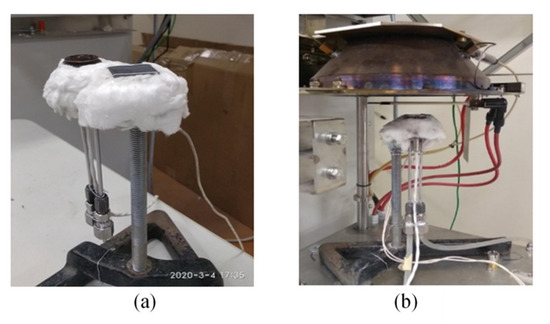