The Effects of Job Mismatch on Pay, Job Satisfaction, and Performance
Next Article in Special Issue

Carbon Sequestration in the Urban Areas of Seoul with Climate Change: Implication for Open Innovation in Environmental Industry

This study estimates the impact of potential climate change, and human interference (anthropogenic deforestation), on temperate forest carbon pool change in the capital area of South Korea, using a dynamic global vegetation model (DGVM). Additionally, the characteristics of forest carbon pool change were simulated based on a biogeochemical module. The change of atmospheric carbon dioxide (CO2) concentration is deeply related to the change of the forest carbon pool, which is estimated with the measures of Net Primary Productivity (NPP), and Soil Carbon Storage (SCS). NPP and SCS were estimated at 2.02–7.43 tC ha−1 year−1 and 34.55–84.81 tC ha−1, respectively, during the period 1971–2000. SCS showed a significant decreasing tendency under the conditions of increasing air temperature, and precipitation, in the near future (2021–2050), and far future (2071–2100), which were simulated with future-climate scenario data without any human interference. Besides, it is estimated that the temporal change in NPP indicates only a small decrease, which is little influenced by potential climate change. In the case of potential climate change plus human interference, the decrease rate of NPP and SCS were simulated at 17–33% and 21–46%, respectively, during 2000–2100. Furthermore, the effect of potential human interference contributes to 83–93% and 61–54% of the decrease rate of NPP and SCS, respectively. The decline in the forest carbon pool simulated in this study can play a positive role in increasing atmospheric carbon dioxide. Consequently, the effect of potential human interference can further accelerate the decline of the temperate forest carbon pool. For the effective reduction of carbon dioxide emissions in urbanizing areas, it would be more effective to control human interference. Consequently, this study suggests that a rate of reforestation corresponding to the deforestation rate should be at least maintained, with long term monitoring and modeling-related studies, against climate change problems. View Full-Text
Keywords: climate change; dynamic global vegetation model; human interference; net primary productivity; soil carbon storage climate change; dynamic global vegetation model; human interference; net primary productivity; soil carbon storage
►▼ Show Figures 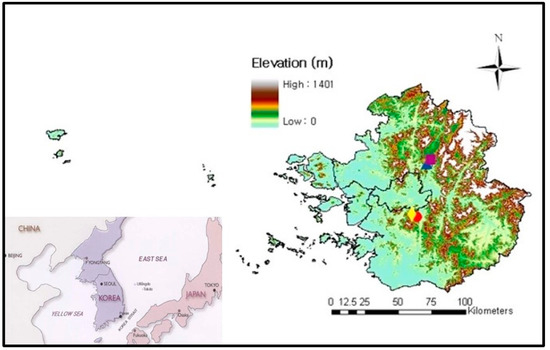 
Lee, Sang-Don, and Sun-Soon Kwon. 2018. "Carbon Sequestration in the Urban Areas of Seoul with Climate Change: Implication for Open Innovation in Environmental Industry" Journal of Open Innovation: Technology, Market, and Complexity 4, no. 4: 48. https://doi.org/10.3390/joitmc4040048