Bordetella pertussis is a human pathogen that causes respiratory illness across all age groups. Infants and children with pertussis experience an acute disease featuring a characteristic hacking, paroxysmal cough [1]. The illness is more extensive in infants and can lead to serious complications, including failure to thrive, apnea, cyanosis, pneumonia, respiratory failure, seizures, and death [2,3]. Infection in adolescents and adults may result in a prolonged cough and is occasionally associated with substantial morbidity [4]. In all age groups, the disease can feature fever and posttussive vomiting [1,4]. Mortality from pertussis most frequently occurs in infants and children, most notably those who are not vaccinated.
The incidence of pertussis in the United States dropped dramatically following the introduction and widespread recommendation of the diphtheria-pertussis-tetanus (DTP) vaccine in 1947 (Figure 1A), and this trend was mirrored globally. The DTP vaccine was composed of inactivated diphtheria, tetanus, and pertussis toxins, and whole-killed B. pertussis cells. The side-effective profile of the DTP vaccine, which included fever and injection site soreness [5], stimulated the development of ‘acellular’ pertussis vaccines, or DTaPs. DTaP vaccines contain multiple purified protein subunits including the adhesins pertactin (Prn), filamentous hemagglutinin (FHA), and, in some formulations, fimbrial antigens FIM2 and FIM3 in addition to the inactivated toxins. The first DTaP vaccines were licensed in 1991, covered for all families in 1995, and formally recommended over DTP vaccines for all children by the Advisory Committee on Immunization Practices (ACIP) in 1997 [6]. An alternative formulation (TDaP) was approved for adults in 2005 (Figure 1A).
Recently, pertussis incidence in the United States has been increasing [7] despite a relatively stable national immunization rate between 1995 and 2017 (Figure 1B). In addition, cases of pertussis have been diagnosed in fully vaccinated children with alarming frequency, suggesting the emergence of one or more vaccine-refractory strains of B. pertussis. These trends have been mirrored worldwide. We sought to analyze this possibility by determining nucleotide and protein sequence diversity of the vaccine antigens from numerous strains collected before and after the introduction of acellular pertussis vaccines; we used these findings to measure points of evolutionary selection and changes within predicted antigenic epitopes.

Pertussis case numbers and vaccination rate data were obtained from the Centers for Disease Control and Prevention via the Pertussis Surveillance and Reporting page (https://www.cdc.gov/pertussis/surv-reporting/cases-by-year.html) and the InstantAtlas™ (NDMSIA) server (https://ndmsia.cdc.gov/IAS/data/excel?viewId=2112&geoId=17&subsetId=&viewer=Excel). Vaccination coverage data reflect the United States national rate for children 19–35 months who received four doses. All nucleotide and protein sequences were mined from GenBank [8]. Strains collected prior to and following the introduction of DTaP vaccines in the country of strain origin were included in this analysis. Strain information (i.e., date of collection, country of origin, local vaccine type available) and accession numbers are available in Supplemental Tables S1–S7.

The statistical significance of global selection on each protein for the M8 model calculations was determined via comparison to a null model, M8a. The M8a model simulated neutral or stabilizing selection based on negative deviations from a fixed ωs value of 1. Statistical significance was determined by likelihood ratio test between the M8 and M8a model scores. Statistical analyses were carried out using Selecton v2.4 [9].

All subunits of pertussis toxin (Ptx1–Ptx5) were under global purifying or neutral selection (Figure 2), with no single amino acid position having a ω value greater than 1. In contrast, both Prn and FHA had multiple sites under diversifying selection (Figure 2 and Figure S1) using either model, indicating global positive selection acts on both proteins. The degree of diversifying selection was statistically significant for both Prn (p < 0.01) and FHA (p < 0.001). Phylogenetic relationships between strains based on each distinct vaccine antigen are visualized by neighbor-joining trees (Supplemental Figure S1A–F).

Predictions of either linear epitopes (i.e., BepiPred outputs) or epitopes based on physiochemistry (Kolaskar and Tongaonkar analysis; not shown) both indicate that Prn and FHA are highly antigenic proteins. All sites under diversifying selection in Prn and FHA fell within antigenic epitopes predicted by both methods (Figure 3A–B). The functional motifs of both proteins also fell within antigenic epitopes. Antigenicity plots using both methods were similar.

Secondary protein structure predictions of Prn and FHA across strains indicates that many, but not all, of the sites under diversifying selection correspond with slight changes in structure (Figure 3A–B). Conversely, some of the significant changes in Prn for individual strains did not appear to have resulted from the diversifying selection as detected by these methods. The carboxyterminal truncation of FHA in strain STO1-CHOC-0017 was immediately preceded by a unique helical stretch, but other strains were structurally consistent in this region (Figure 3A). Aminoterminal truncations or deletions of Prn were observed in multiple strains (Figure 4), inducing structural changes beyond the simple absence of amino acids in these strains (Figure 3B). Structures regained consistency across strains by position 150 with the exception of the length of the coiled-coil motif, which was generated by a diversity in the number of G-G-(A/G/F)-(V/G)-P repeats (Figure 4) and the replacement of a long helical structure with a disordered region at position 600 in strain B340 (Figure 3B).

The findings presented in this study indicate that the DTaP vaccine is setting the stage for immune selection that will drive diversity in the colonizing factors of B. pertussis. Reduction in disease severity among vaccinated individuals is still apparent and the overall risk of pertussis is positively correlated with under-vaccination, indicating that vaccination against pertussis remains a critical public health measure [39,45,46]. Alterations to the current pertussis vaccination strategy are the subject of numerous initiatives [47,48,49,50]. Our findings suggest that further diversification is predictable, and that changes to the current approach are warranted and should be prioritized.

This research was funded by the Peter Morgane Research Fellowship Program. 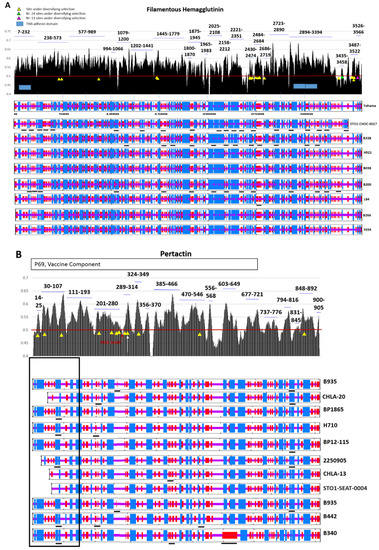