Vaccination remains the most effective and essential prophylactic tool against infectious diseases. Enormous efforts have been made to develop effective vaccines against malaria but successes remain so far limited. Novel adjuvants may offer a significant advantage in the development of malaria vaccines, in particular if combined with inherently immunogenic platforms, such as virus-like particles (VLP). Dioleoyl phosphatidylserine (DOPS), which is expressed on the outer surface of apoptotic cells, represents a novel adjuvant candidate that may confer significant advantage over existing adjuvants, such as alum. In the current study we assessed the potential of DOPS to serve as an adjuvant in the development of a vaccine against malaria either alone or combined with VLP using Plasmodium falciparum thrombospondin-related adhesive protein (TRAP) as a target antigen. TRAP was chemically coupled to VLPs derived from the cucumber mosaic virus fused to a universal T cell epitope of tetanus toxin (CuMVtt). Mice were immunized with TRAP alone or formulated in alum or DOPS and compared to TRAP coupled to CuMVtt formulated in PBS or DOPS. Induced immune responses, in particular T cell responses, were assessed as the major protective effector cell population induced by TRAP. The protective capacity of the various formulations was assessed using a transgenic Plasmodium berghei expressing PfTRAP. All vaccine formulations using adjuvants and/or VLP increased humoral and T cell immunogenicity for PfTRAP compared to the antigen alone. Display on VLPs, in particular if formulated with DOPS, induced the strongest and most protective immune response. Thus, the combination of VLP with DOPS may harness properties of both immunogenic components and optimally enhance induction of protective immune responses. View Full-Text
Keywords: vaccine; adjuvants; Plasmodium falciparum; malaria; virus like particle (VLP); dioleoyl phosphatidylserine (DOPS) vaccine; adjuvants; Plasmodium falciparum; malaria; virus like particle (VLP); dioleoyl phosphatidylserine (DOPS)
►▼ Show Figures 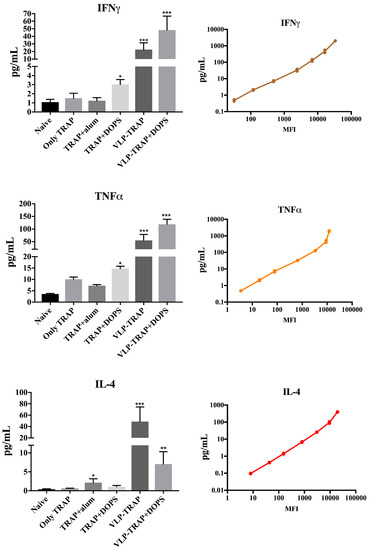