Evolution of V2X Communication and Integration of Blockchain for Security Enhancements

In recent times, vehicular ad hoc networks (VANET) have become a core part of intelligent transportation systems (ITSs), which aim to achieve continual Internet connectivity among vehicles on the road. The VANET has been used to improve driving safety and construct an ITS in modern cities. However, owing to the wireless characteristics, the message transmitted through the network can be observed, altered, or forged. Since driving safety is a major part of VANET, the security and privacy of these messages must be preserved. Therefore, this paper introduces an efficient privacy-preserving data transmission architecture that makes use of blockchain technology in cluster-based VANET. The cluster-based VANET architecture is used to achieve load balancing and minimize overhead in the network, where the clustering process is performed using the rainfall optimization algorithm (ROA). The ROA-based clustering with blockchain-based data transmission, called a ROAC-B technique, initially clusters the vehicles, and communication takes place via blockchain technology. A sequence of experiments was conducted to ensure the superiority of the ROAC-B technique, and several aspects of the results were considered. The simulation outcome showed that the ROAC-B technique is superior to other techniques in terms of packet delivery ratio (PDR), end to end (ETE) delay, throughput, and cluster size. View Full-Text
Keywords: blockchain; clustering; privacy; inter-vehicle communication vehicular networks; security; rainfall optimization algorithm blockchain; clustering; privacy; inter-vehicle communication vehicular networks; security; rainfall optimization algorithm
►▼ Show Figures 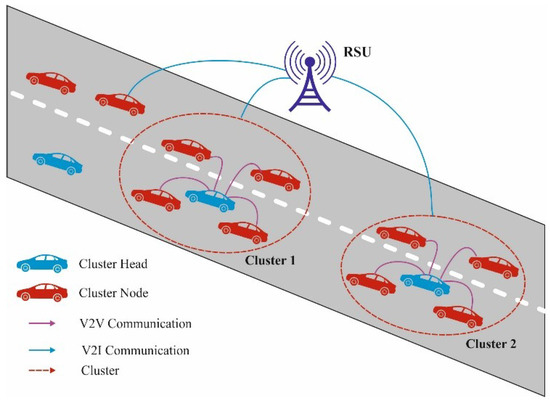