With the expansion of cloud-leveraged Information and Communications Technology (ICT) convergence trend, cloud-native computing is starting to be the de-facto paradigm together with MSA(Microservices Architecture)-based service composition for agility and efficiency. Moreover, by bridging the Internet of Things (IoT) and cloud together, a variety of cloud applications are explosively emerging. As an example, the so-called IoT-Cloud services, which are cloud-leveraged inter-connected services with distributed IoT devices, dynamically utilize geographically-distributed multiple clouds since mobile IoT devices can selectively connect to the near-by cloud resources for low-latency and high-throughput connectivity. In comparison, most public cloud providers may cause vendor lock-in problems that limit the inter-operable service compositions. Thus, in this paper, we propose a new overlay approach to address the above limitations, denoted as Dynamic OverCloud, which is a specially-arranged razor-thin overlay layer that provides users with an inter-operable and visibility-supported environment for MSA-based IoT-Cloud service composition over the existing multiple clouds. Then, we design a software framework that dynamically builds the proposed concept. We also describe a detailed implementation of the software framework with workflows. Finally, we verify its feasibility by realizing a smart energy IoT-Cloud service with the suggested operation lifecycle. View Full-Text
Keywords: cloud-native; multiple clouds; microservices architecture; service composition; IoT-Cloud service; visibility; DataLake cloud-native; multiple clouds; microservices architecture; service composition; IoT-Cloud service; visibility; DataLake
►▼ Show Figures 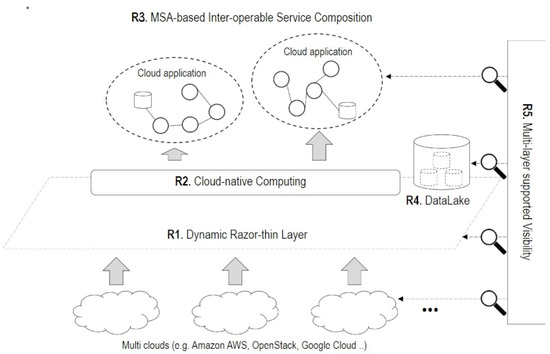