Given the lack of a standard procedure for clinical FRP assessment on back muscles, in this work, we have proposed a WBSN to automatically analyse the multichannel surface-electromyography signals together with the real movement performed by the subject. It consists of a wireless surface electromyography system composed of four sEMG sensors and one wearable device with triaxial accelerometer, gyroscope, and magnetometer sensors embedded. As shown in Figure 1, the wearable device was positioned on the first lumbar vertebra and the electrodes of the 4 sEMG sensors were placed along the fibers [44] of the longissimus left, longissimus right, multifidus left, multifidus right muscles, respectively. Longissimus muscles are part of the erector muscles of the vertebral column together with the iliocostalis and spinal muscles. The myoelectric signals of the longissimus muscles were acquired from two pairs of electrodes (LSX and LDX) positioned two fingers apart in a lateral direction from the spinous process L1 [45]. Multifidus muscles are part of the deep muscles of the trunk as they are in close contact with the spine. The myoelectric signals of the multifidus muscles were acquired from two pairs of electrodes (MSX and MDX) positioned on the line connecting the caudal tip of the posterior superior iliac spine to the space between L1 and L2, at the level of the spinous process of L5, 2–3 cm from the medial line [45]. The application surface was cleaned, before applying electrodes on the skin, with an alcohol swab, and the appropriate professional paste was applied to the electrodes in order to reduce the effects of the resistance provided by the skin and impurities [46,47].
In order to identify muscles activity, the sEMG signals were acquired with a sampling frequency of 2000 Hz. The acquired sEMG signals were the following:
The wearable device signal, to estimate the inclination of the subject, was acquired with a sampling frequency of 128 Hz. The data collected by the wearable device were the following:
The electromyography signals obtained by each sEMG sensor and the data collected by the wearable device were sent to a personal computer that acted as a central processing unit. The data acquired during the flexion-relaxation test, by the subjects under analysis, were processed and stored [12]. Before starting the forward bend test, the subject was placed with the arms on the side with the feet to the width of the shoulders, standing upright with the gaze straight and fixed on one point in order to avoid any artifact due to the alteration of the head position. During the flexion-relaxation test, the subject wore the proposed WBSN and he repeated 4 times a motion trial in which he was asked to naturally reach a bend angle about 90 without straining the lumbar region. One complete movement was called “cycle” and it was repeated 4 times (a compromise that allowed to have a good number of repetitions without exaggerating and stressing too much the muscles involved). As shown in Figure 2, each cycle consists of 4 phases listed below:
According to McGorry et al. [12], the FRP may vary with changes in execution speed, prolonged static flexion, rest time, external load application. So, we must try to keep these parameters as constant as possible in order to make the results comparable over time.
The proposed WBSN was used in an extensive acquisition campaign conducted in collaboration with Santo Stefano Rehabilitation Institute (Porto Potenza Picena, Italy). The purpose was also to collect data from healthy and LBP subjects, to investigate the relationship between FRP and physical conditions. Before starting the acquisition campaign, demographic data, and patient history of each subject were registered to have a report about perceived pain and disability conditions. NRS-11 scale was used to identify the perceived pain during, before, and after the flexion-relaxation test execution [43,48]. Another patient condition measure (disability) was evaluated with the backill questionnaire [49] that assesses the ability to make or not a series of activities [43]. Procedures and experimental design of the acquisition campaign have been described in our previous study together with the complete dataset used to evaluate the FRP detection performances of the developed algorithm [43]. The dataset includes information and signals acquired on a total of 25 subjects submitted to the flexion-relaxation test, using the proposed WBSN.

The algorithm was tested using the dataset published in our previous study [43]. It contains acquisitions of 25 volunteer subjects; they repeated four times the cycle as defined in the flexion-relaxation test procedure [43]. In each cycle the electromyography signals of four muscles were acquired. Therefore, a total number of 400 events were extracted for the evaluation of the performances using the proposed algorithm for FRP clinical assessment. To identify if the automatic algorithm was taking the correct decision, in terms of FRP identification, a comparison between FRR and VIS method results were presented. VIS method was taken as a benchmark because of, due to its accurate performances, it was commonly adopted in clinical and research applications [20]. The recordings collected in the dataset were evaluated by independent blind teams composed of medical experts. Using VIS method (on the sEMG signals with the superimposed inclination signal), the blind teams provided handwritten reports in which the occurrences of FRP in each cycle have been reported. The results of the VIS method were obtained by summarizing the handwritten reports and in cases of disagreement between the three blind teams, a final decision was reached by the majority. The VIS method results are shown in Table 1, where each event of the dataset is classified by a Positive (P) or a Negative (N) outcome. In events with the positive outcome the blind teams have ascertained the FRP presence in the cycle under examination while in the events with a negative outcome the FRP absence was identified. The VIS method is based on criteria found in the literature: “A clear, sudden reduction in motor activity” [20].
An ideal algorithm, for FRP detection, should identify the FRP onset in all the events with a positive outcome and it should recognize FRP absence in all the events with a negative outcome. Comparing the results of the VIS method with those obtained by the proposed automatic algorithm for FRP detection is possible to identify four types of events classification:
The information, collected in the dataset, was processed by the proposed algorithm for FRP detection and the results have been shown together with the flexion-extension ratio values calculated in each cycle and channel (Table 2), using Equation (1). Table 3 shows the mean and the SD obtained using the algorithm for computing ratios between full-flexion and extension phase.
Since the number of dataset events was statistically significant, it was possible to derive accuracy, sensitivity, and specificity about the performances of the proposed algorithm using the following equations:

This paper deepens the investigation of FRP on back muscles using a WBSN composed of four sEMG sensors and a wearable device that integrates accelerometer, gyroscope, and magnetometer. The raw data collected from the WBSN during the flexion-relaxation test are processed by an algorithm able to identify the phases of which the test is composed, provide an evaluation of the myoelectric activity and automatically detect the FRP presence/absence. The proposed algorithm was tested using the data acquired in an acquisition campaign conducted to evaluate the flexion-relaxation phenomenon on the back muscles of subjects with and without LBP. The computed signal, identifying the phases of the flexion relaxation test, represented very well the subject’s trunk real motion. Moreover, the phases signal trend varies in correspondence of the angular variations causing the activation or not of the muscles. The assessment of the myoelectric activity on back muscles provided by the proposed algorithm was evaluated by the medical staff as a useful tool to identify and cluster different patterns, visually analyse FRP presence/absence with the VIS method and aid the clinical assessment of the FRP. The ratio, expressed by Equation (1), was computed for each event using the data collected in the acquisition campaign. This FRR parameter is then compared with an empirical threshold value and the final decision about flexion-relaxation phenomenon presence/absence is taken. The threshold level used in the algorithm to detect FRP seemed to classify very well the events collected in the dataset. Indeed, the results show that the proposed algorithm for the FRP detection obtained an accuracy of 95.5%, a sensitivity of 98.5%, and a specificity of 92.6%, processing the data acquired from the subjects with and without LBP. Despite the excellent results achieved, future developments will concern the planning of a new acquisition campaign and the study of new solutions able to detect the FRP and to improve the performance of the proposed algorithm. In the future acquisition campaign, different motion tasks will be taken into consideration to evaluate the FRP and the psycho-physical conditions of the subjects involved (health conditions, level of stress, etc.) will be carefully monitored before carrying them out. Moreover, the relationship between the FRR method and the low back pain will be studied in future works in order to try to discriminate healthy subjects from LBP patients by analysing FRRs parameters without knowing a priori the clinical conditions.

The authors are grateful to the Istituto di Riabilitazione Santo Stefano (www.sstefano.it) for the opportunity to carry out this research work and the technical support of the materials used for experiments. 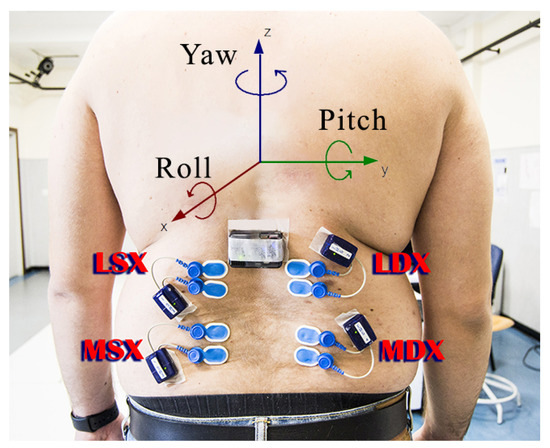 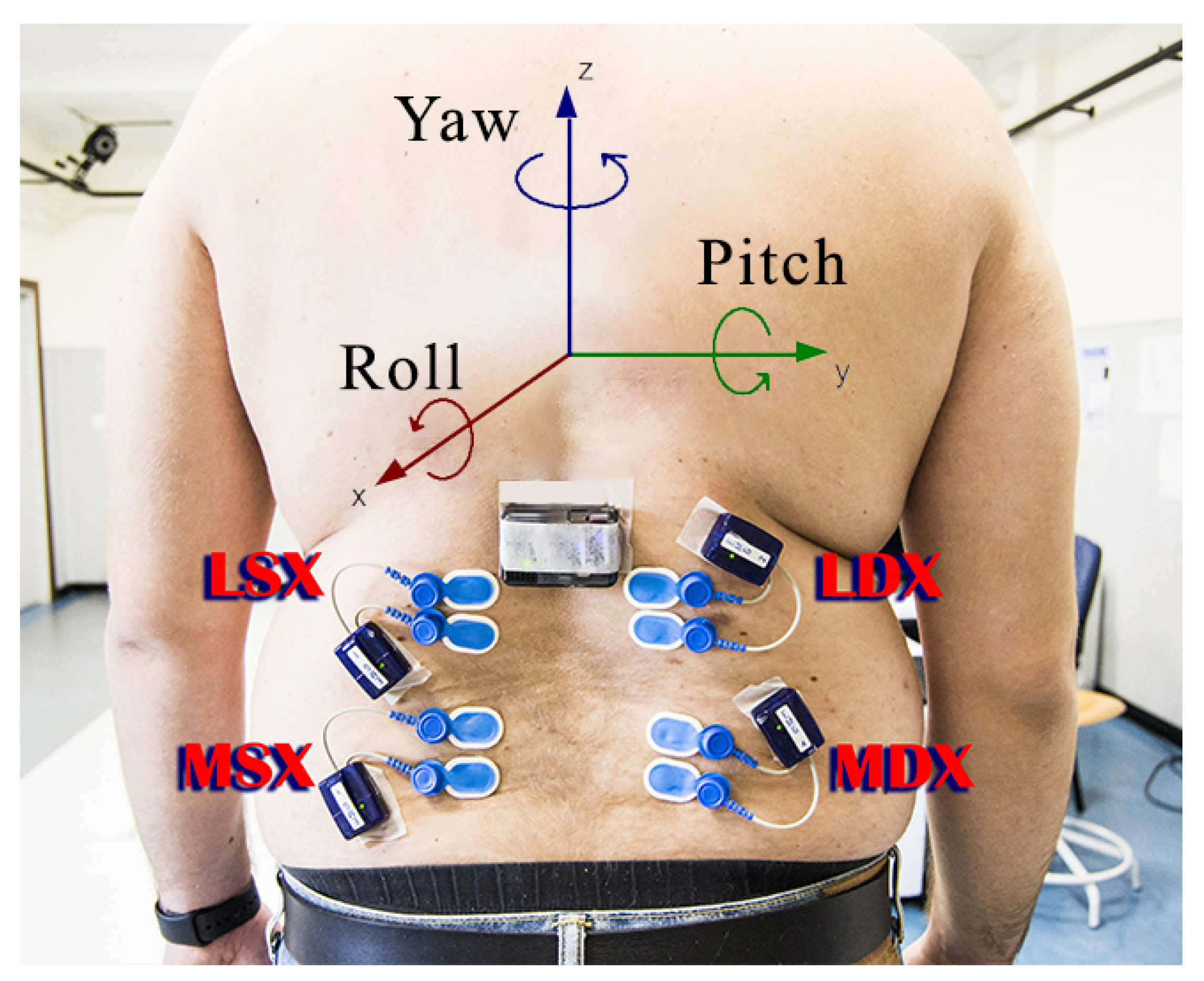 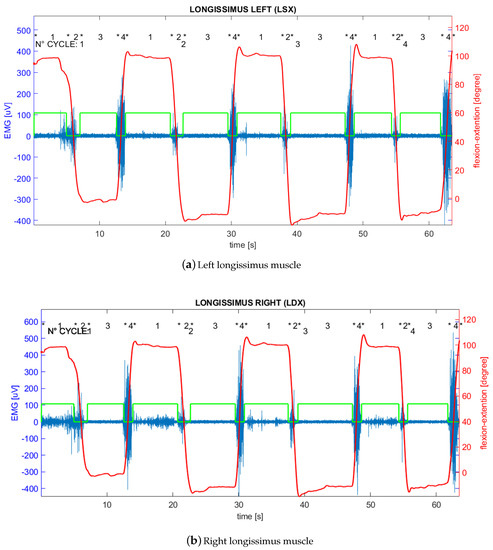 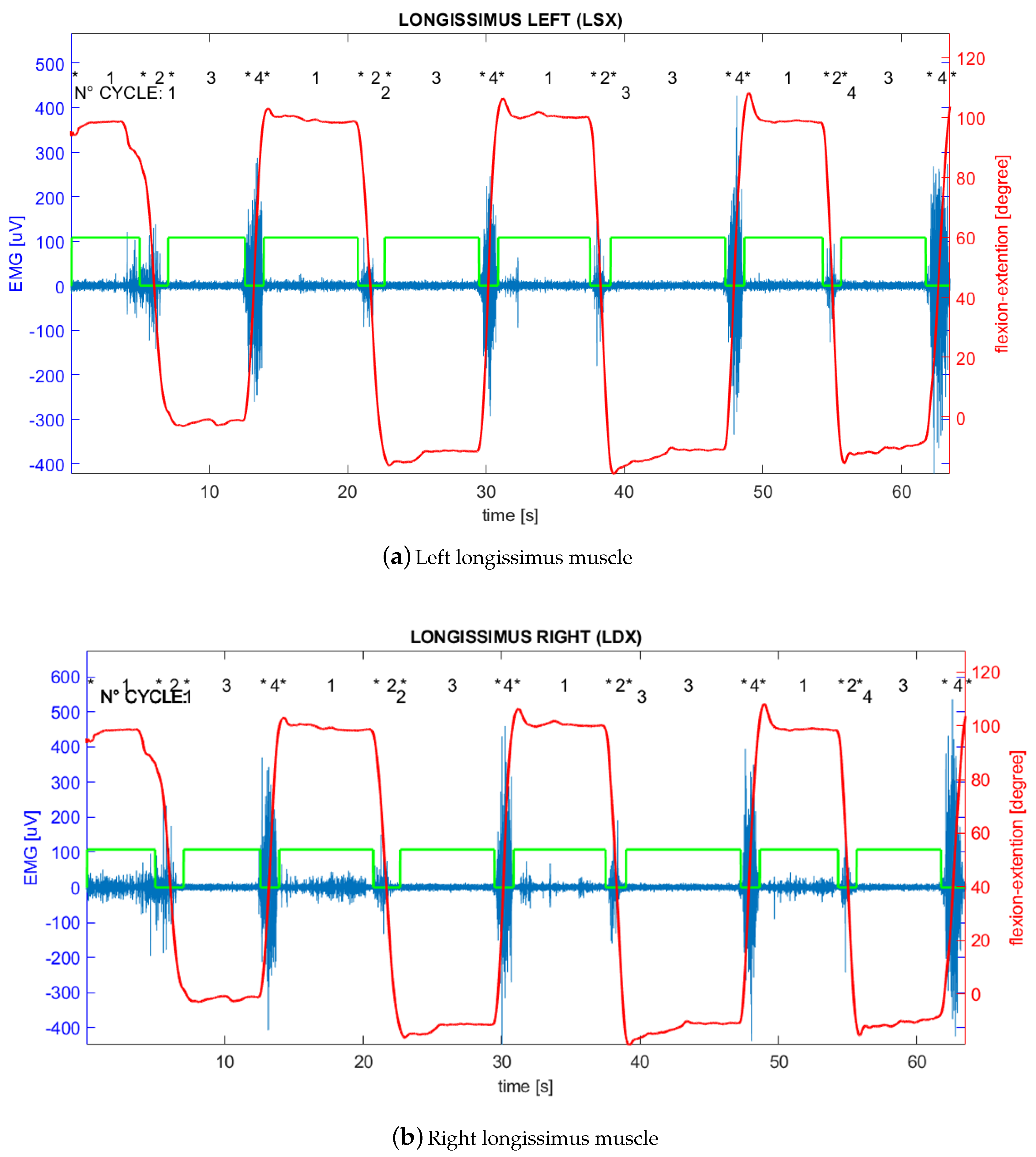 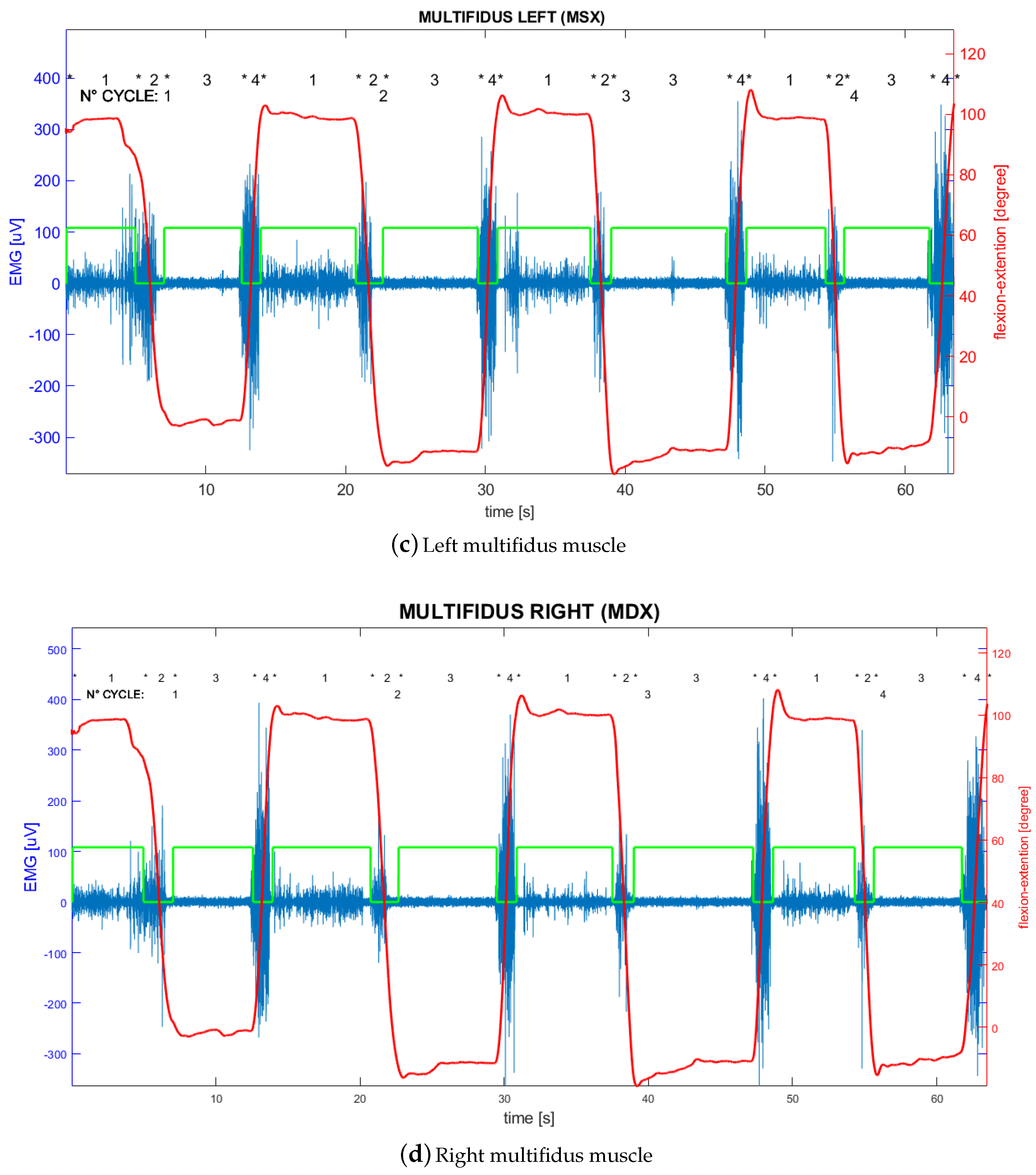 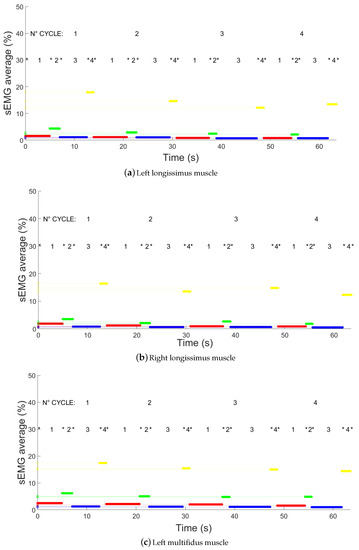 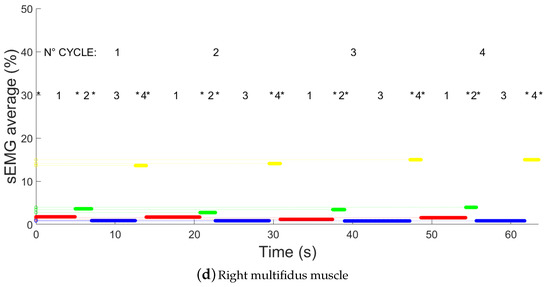 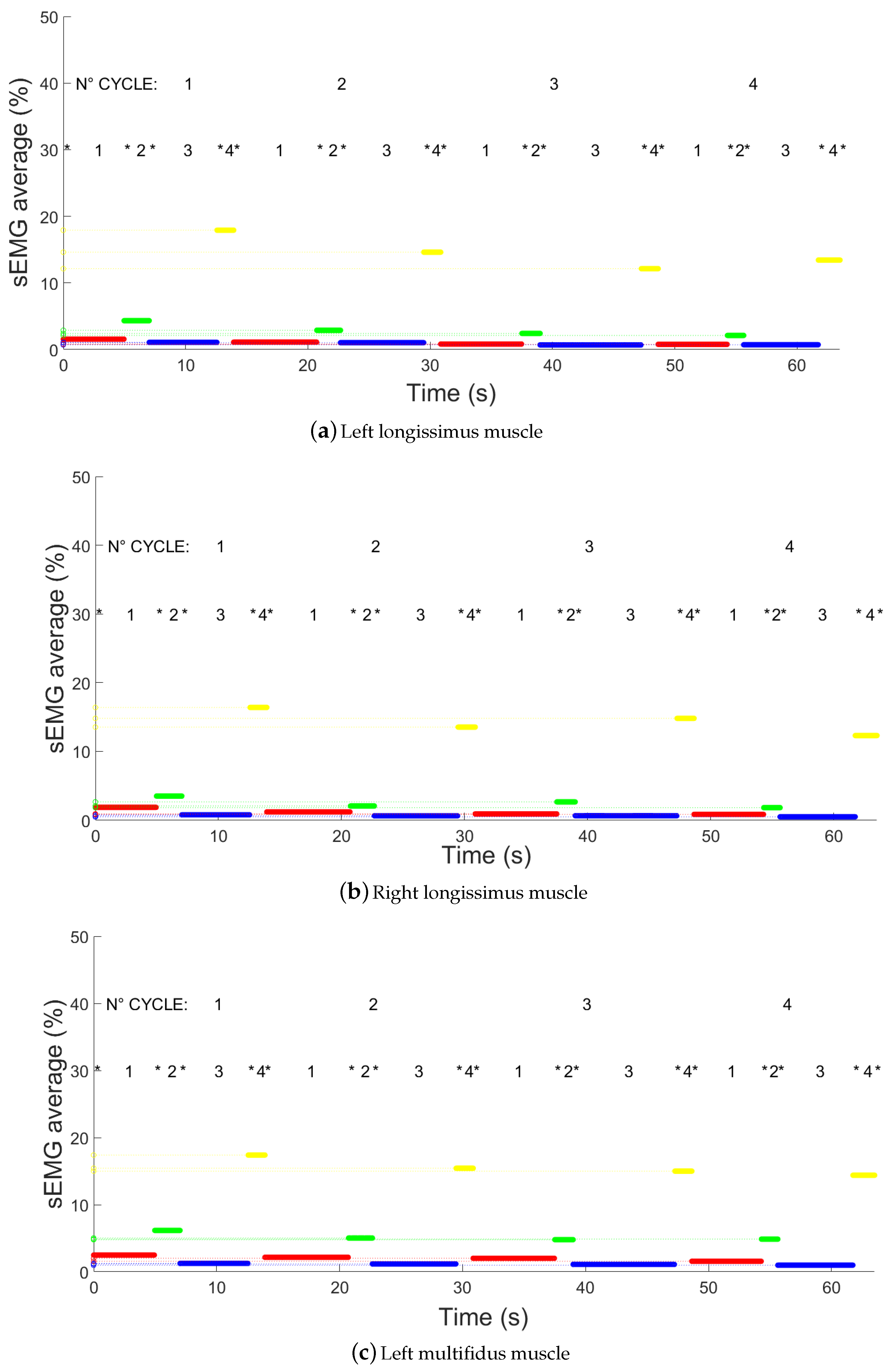 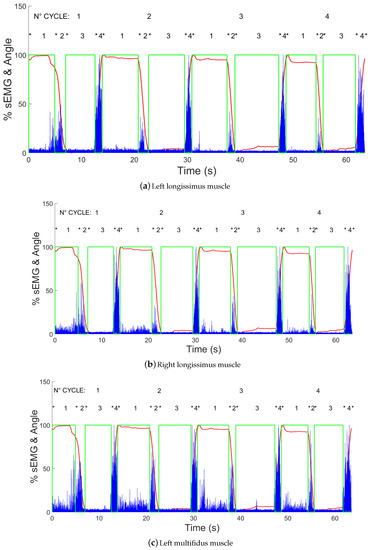 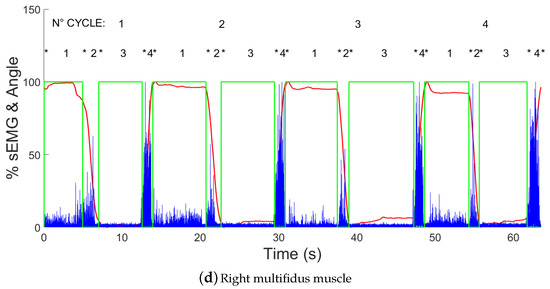 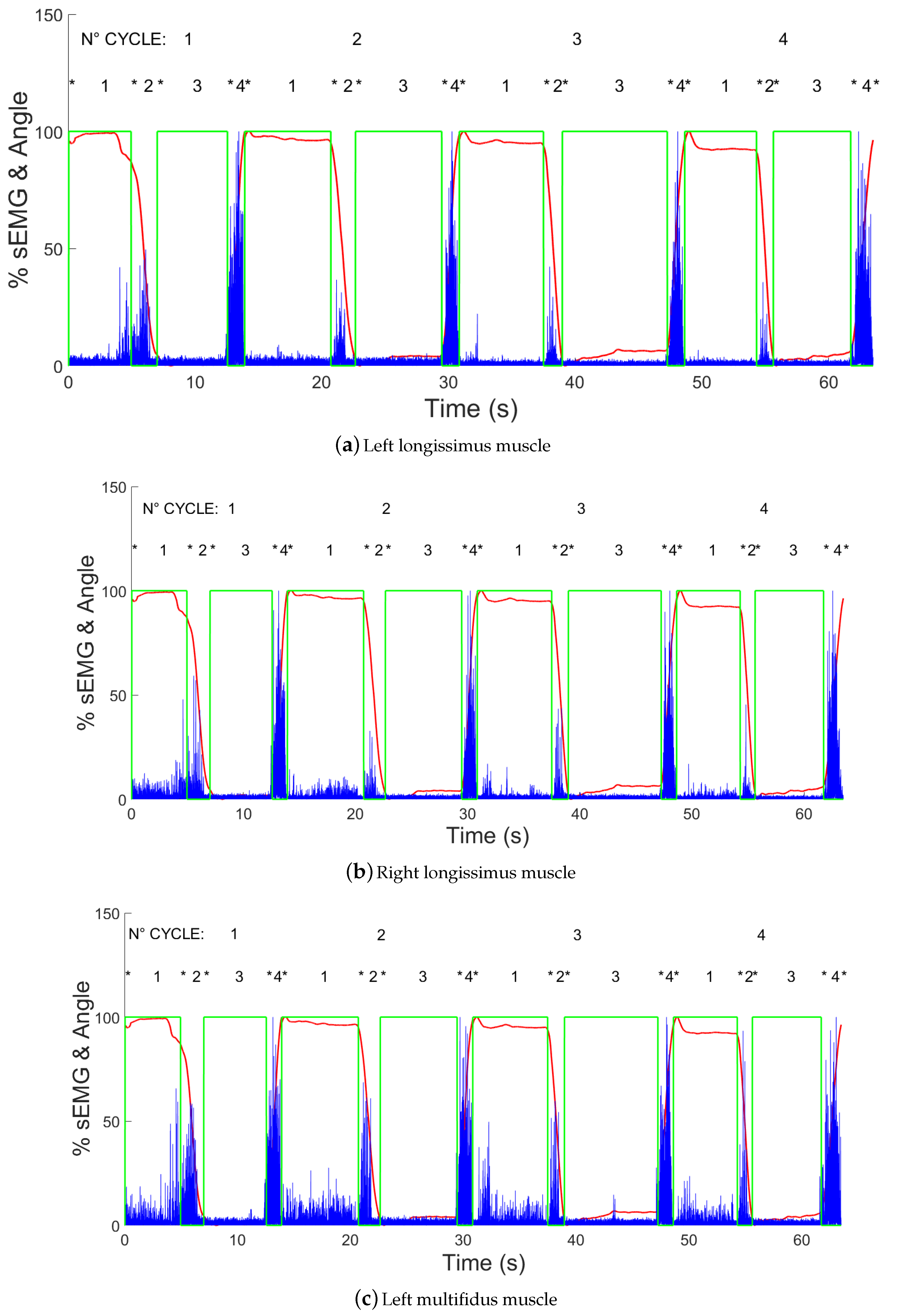 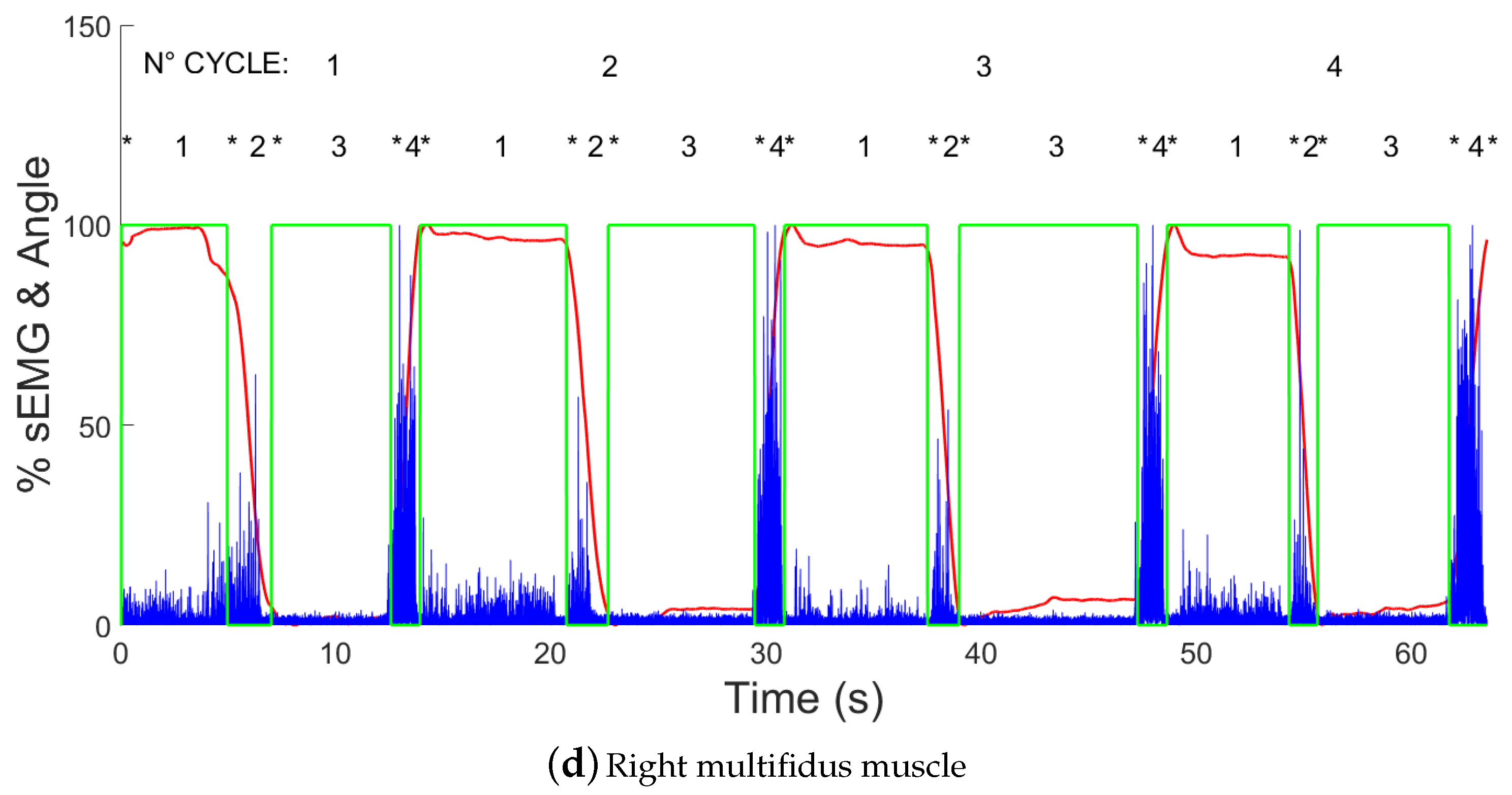