Delay tolerant networks (DTN) is a good candidate for delivering information-centric networking (ICN) messages in fragmented networks due to disaster. In order to efficiently deliver ICN messages in DTN, the characteristics of multiple requester nodes for the same content and multiple provider nodes for the same request should be used efficiently. In this paper, we propose an efficient DTN routing protocol for ICN. In the proposed protocol, requester information for request packet, which is called an Interest in ICN, is shared by exchanging status table with requested Data ID, requester ID, and satisfaction flag, where satisfaction flag is defined to show the delivery status of Data, so that unnecessary forwarding of Data is avoided. Data is forwarded to a more probable node by comparing average delivery predictability to a set of requesters. Performance of the proposed protocol was evaluated using simulation from the aspect of Data delivery probability and Data overhead, for varying buffer sizes, number of relay nodes, and time-to-live (TTL) of Data. The results show that the proposed protocol has better Data delivery probability, compared to content distribution and retrieval framework in disaster networks for public protection (CIDOR) and opportunistic forwarding (OF) protocols, although there is a tradeoff from the aspect of Data overhead for varying buffer sizes and number of relay nodes. View Full-Text
Keywords: delay tolerant network; information-centric networking; delivery probability; overhead; ONE simulator delay tolerant network; information-centric networking; delivery probability; overhead; ONE simulator
►▼ Show Figures 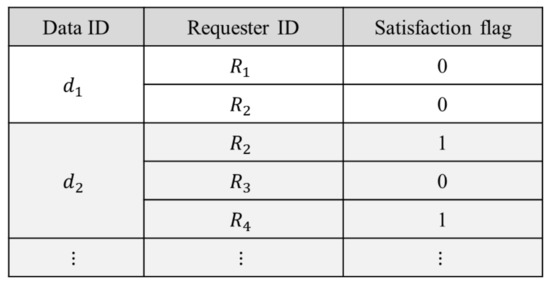