The autonomous navigation and environment exploration of mobile robots are carried out on the premise of the ability of environment sensing. Simultaneous localisation and mapping (SLAM) is the key algorithm in perceiving and mapping an environment in real time. FastSLAM has played an increasingly significant role in the SLAM problem. In order to enhance the performance of FastSLAM, a novel framework called IFastSLAM is proposed, based on particle swarm optimisation (PSO). In this framework, an adaptive resampling strategy is proposed that uses the genetic algorithm to increase the diversity of particles, and the principles of fractional differential theory and chaotic optimisation are combined into the algorithm to improve the conventional PSO approach. We observe that the fractional differential approach speeds up the iteration of the algorithm and chaotic optimisation prevents premature convergence. A new idea of a virtual particle is put forward as the global optimisation target for the improved PSO scheme. This approach is more accurate in terms of determining the optimisation target based on the geometric position of the particle, compared to an approach based on the maximum weight value of the particle. The proposed IFastSLAM method is compared with conventional FastSLAM, PSO-FastSLAM, and an adaptive generic FastSLAM algorithm (AGA-FastSLAM). The superiority of IFastSLAM is verified by simulations, experiments with a real-world dataset, and field experiments. View Full-Text
Keywords: FastSLAM; genetic algorithm; resampling; particle swarm optimisation; fractional differential; chaotic; robot FastSLAM; genetic algorithm; resampling; particle swarm optimisation; fractional differential; chaotic; robot
►▼ Show Figures 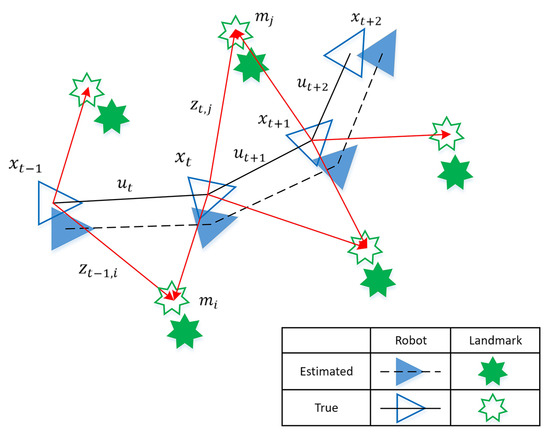