It is worldwide known that the most common type of cancer among women is breast cancer. Traditional procedures involve surgery, chemotherapy and radiation therapy; however, these treatments are invasive and have serious side effects. For this reason, minimally invasive thermal treatments like microwave ablation are being considered. In this study, thermal behavior of three types of slot-coaxial antennas for breast cancer microwave ablation is presented. By using finite element method (FEM), all antennas were modeled to estimate the heat transfer in breast tumor tissue surrounded by healthy breast tissue. Experimentation was carried out by using the antennas inserted inside sphere-shaped-tumor phantoms with two different diameters, 1.0 and 1.5 cm. A microwave radiation system was used to apply microwave energy to each designed antenna, which were located into the phantom. A non-interfering thermometry system was used to measure the temperature increase during the experimentation. Temperature increases, recorded by the thermal sensors placed inside the tumor phantom surrounded by healthy breast phantom, were used to validate the FEM models. The results conclude that, in all the cases, after 240 s, the three types of coaxial slot antenna reached the temperature needed produce hyperthermia of the tumor volume considered in this paper. View Full-Text
Keywords: microwave ablation; slot-coaxial antennas; finite element method; phantom microwave ablation; slot-coaxial antennas; finite element method; phantom
►▼ Show Figures 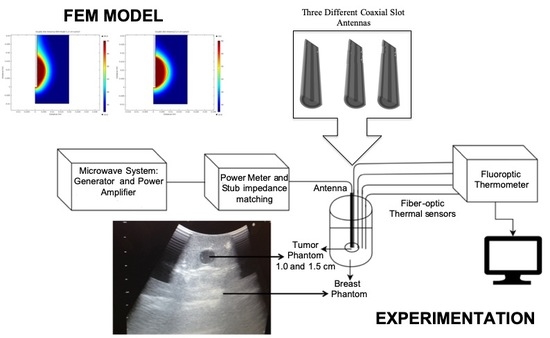