This paper proposes a novel pulse width modulation (PWM) for a three-level neutral point clamped (NPC) voltage source inverter (VSI). When the conventional PWM method is used in three-level NPC VSI, dead time is required to prevent a short circuit caused by the operation of complementary devices on the upper and lower arms. However, current distortion is increased because of the dead time and it can also cause a voltage unbalance in the dc-link. To solve this problem, we propose a zero dead-time width modulation (ZDPWM) which does not require dead time used in complementary operation. The proposed technique applies the offset voltage to the space vector pulse width modulation (SVPWM) reference voltage for the same modulation index (MI) as the conventional SVPWM, but any complementary switching operation needs dead time. In addition, the proposed method is divided into four operation sections using the reference voltage and phase current to operate switching devices which flow the current depending on the section. This ZDPWM method is simply implemented by carrier and reference voltage that reduce the current distortion, because complementary operation that needs dead time is not implemented. However, the operation section is delayed due to the sampling delay that occurs during the experiment. Therefore, in this paper, we conduct a modeling of sampling delay to improve the delay of operation section. To verify the principle and feasibility of the proposed ZDPWM method, a simulation and experiment are implemented. View Full-Text
Keywords: three-level NPC VSI; zero dead-time PWM; sampling delay; current distortion three-level NPC VSI; zero dead-time PWM; sampling delay; current distortion
►▼ Show Figures 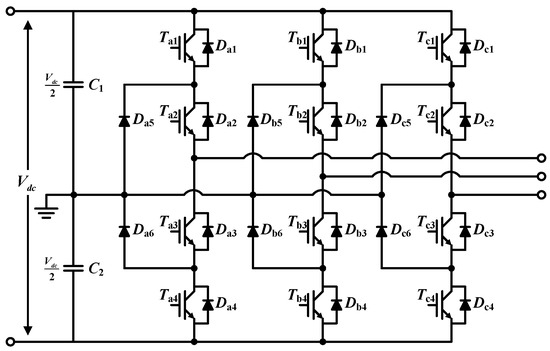