2.1. Concepts and Tasks of Military Intelligence

Various military information systems were developed and operated to support military intelligence services. Analyzing the development trend of military information systems, the following characteristics can be seen. First, an information system was developed to support one stage, such as planning and processing, in the information circulation stage. However, recently, the scope of development has been expanded to all the stages of information circulation, ranging from the planning to dissemination stage [6,7].
Second, the information collected using a single sensor was analyzed, but it is being developed to increase the accuracy of information analysis by fusing the information collected using multiple sensors [8]. In other words, intelligence analysts are attempting to fuse imagery information collected using sensors, such as satellites, Hawks, and Geumgang, or attempting to fuse imagery, signals, and open-source information (US DCGS, All-Source Analysis System; Raytheon Corporation FoxTEN, 2019 [9]; Rafael IMILITE, 2017 [10]; Jane’s Data Analytics, 2019 [11]; Korea ETRI, 2019 [12,13,14,15]).
Third, the intelligence analysis was previously centered on a “collection sensor” that analyzed the information collected using surveillance and reconnaissance assets (sensors); however, the analysis now analyzes the information based on the “mission” [16]. The Ministry of National Defense, Israel, is striving to replace IAI ELTA’s RICENT by Rafael’s IMILITE. Notably, RICent is a “sensor-centered” system that analyzes and disseminates the imagery information collected using sensors. IMILITE is a “mission-centered” system that analyzes and disseminates the imagery information collected by requesting for the images necessary for performing missions [10].
Finally, the amount of the military intelligence data collected owing to the emergence of new surveillance weapons systems, such as military satellites, drones, and unmanned aerial systems, is exponentially growing. In addition, the AI technology is being applied to the analysis work to efficiently process and fuse such data to produce reliable intelligence [17,18,19,20]. A typical example is Project Maven. DoD established an Algorithmic Warfare Cross-Functional Team, called Project Maven, which have conducted projects by applying AI to help a workforce that was significantly overwhelmed because of the incoming data, which included millions of hours of video [21].
According to a report released recently released by the RAND corporation [22], there are several advantages in the application of AI in the military domains: improved decision-making speed; effective utilization of big data, targeting, and vision; mitigation of military issues; improved cyber defense; and reduced labor and expenses. Intelligence surveillance and reconnaissance (ISR) corresponds to one of the most recent investments in military AI, and this trend is expected to continue. In particular, considering the amount, speed, and diversity of data collected from sensors on the ground and in air, space, and cyberspace, the report concluded that the partial or complete utilization of AI in a military analysis is necessary.

The United States issued an executive order for an AI initiative in February 2019 [23,24]. The executive order prioritized long-term, proactive investment by the government in AI research, development, and manpower to enhance the competitiveness of the private sector. In particular, the initiative focused on the implementation of AI technology in the fields of next-generation research and development (R&D) and military security, which are difficult to promote through the private companies.
In addition, the Chinese government released the “New Generation Artificial Intelligence Development Plan” in July 2017 [24]. This plan was initiated by the government to foster large-scale investments and increase manpower in the field of AI. The plan is also aimed at designating leading companies for AI development and fostering industry-specific platforms.
The French government also announced its AI strategy in March 2018 [24,25], espousing the adoption of AI, the core of the future digital economy, to solve social problems, and promoted industrialization in the strategic field to solve varying problems regarding occupation, employment, and ethics.
Japan’s response to the fourth industrial revolution was based on the Japan Revitalization Strategy in 2015 [26], applied at the joint level of ministries. This strategy emphasized the challenges faced by AI R&D in the context of the technological characteristics of such intelligence and the strengths of the robotics technologies possessed by Japan. Moreover, Japan announced its AI strategy in March 2019 [24,26], which aimed to boost industrial vitality and accelerate AI technology innovation to solve social problems such as low growth and an aging society.
In December 2019, the government announced the “National Strategy for Artificial Intelligence in the Republic of Korea [24].” This strategy, with the vision of “beyond the IT powerhouse, to become the AI powerhouse,” includes three areas, nine strategies, and 100 implementation tasks. AI is expected to spread throughout the industry to all domains. In particular, the MND has identified the development of intelligent platforms in 2020 and the intelligence functions of command control systems using defense data as the major task. In addition, it has decided to accelerate the development of intelligence supporting the command system through the establishment of the Defense Intelligence Data Center from the beginning of 2020.
The Ministry of National Defense announced the “4th Industrial Revolution Smart Defense Innovation Plan” in conjunction with “Defense Reform 2.0” by utilizing advanced technologies from the 4th Industrial Revolution in anticipation of all-out threats, including those from North Korea [27]. The plan was envisioned as “building a smart and strong military through defense innovation based on the 4th revolution,” and the three major innovation areas of defense operation, technology and infrastructure, and military strength were presented. In the domain of innovation of the military strength, seven major areas and 30 weapon systems projects were selected to spearhead the R&D of advanced defense science and technology. Among them, various weapons systems are related to military intelligence, such as military satellite, unmanned surveillance and reconnaissance aircraft, reconnaissance drones, and multi-source video convergence systems in the R&D core technology area [28].
In addition, the MND has devised its development plans for various military information systems, including a ground force intelligent video convergence sharing system, cloud-based military intelligence dissemination system, and image information management system through the application of AI technologies [29].

3. Method of Priority Determination for the Application of AI

The first factor to consider while determining the priority to apply AI technology will be the problem, or requirements, to be solved by applying the AI technology. Next, we must identify which artificial intelligence technology is needed to solve the problem. AI has various sub-sectors, and the speed of technology development in each sector is different. Therefore, the effect of applying the AI technology should also be considered. The availability of data is another major consideration because the AI technology must have sufficient data to learn and apply the data. In this section, we present the criteria for prioritizing the following four factors to apply the AI technology to military intelligence areas.
① Requirements:
First, the requirements should be addressed at the work level, and the difficulty of the requirements should also be considered, such as how clear or how complicated they are.
② Data:
The next factor to consider is the readiness of the data, such as whether the data are available to be applied to the AI technology (data availability), whether the data are machine readable (data readability), and whether the data can be shared (data confidentiality).
③ AI technology:
A classification system for AI technology has not yet been established, and various studies are currently being conducted on this topic. In this study, the classification criteria proposed by the Ministry of Science and ICT, presented in Table 1, have been applied [30]. Examples applications of AI in military operations include machine learning applied to natural language processing and understanding, the provisioning of information to support the commander’s decision making, automatic target detection, automatic target recognition (ATR), and combat robot development. Moreover, AI technologies are required for the selection of specific technologies by considering the data requirements of the application domain.
④ Technical effects:
Various artificial intelligence technologies can be applied to solve the requirements of military intelligence areas. Depending on the nature and skill of the work, the effect of improving the work may be different with AI. Therefore, to determine the priority of each sector, we must consider the effect of improving business while applying the AI technology. Table 2 summarizes the four criteria for determining the priorities described above.

4.1. Selection of the Target Domain

Table 6 depicts the results of priority determination obtained by applying the AI technology during the planning, collection, processing, analysis, and dissemination stages, which are the constituent domains in military intelligence.
As a result of applying the priority calculation formula, the processing stage was found to have the highest priority at 6.9 points as shown in Equation (2). In terms of the difficulty of the requirements, the requirements in the processing stage were simpler and clearer because of the execution of a source-specific analysis based on currently collected information. The processing stage was located in the first quadrant of the requirement difficulty graph depicted in Figure 3, with allocated 2 points.
In the case of data readiness, the AI technology could be applied immediately as the information collected in the past was readily available (availability). In addition, the information stored in the database corresponded to the second and third stages, and it was machine readable (readability). The processing stage was located across the first and fourth quadrants of the data readiness graph presented in Figure 4, and was allocated 1.5 points as the median score.
Furthermore, machine learning and cognitive functions could be applied to information processing, and the maturity of this technology was ascertained to be between the third (bubble-removal) and the fourth stages (re-lighting). The effect of applying cognitive functions was observed to be the most pronounced in terms of technology-application effects. The processing stage was awarded 1.4 points at the technological maturity (level, and 2 points were allocated, in the first quadrant of the technical application effects ( graph in Figure 5. The priority of applying AI technology to the military intelligence area was processing > dissemination > collection > analysis > planning.
The above example is used by policy departments for decision-making purposes. When system development departments assess the priorities by placing higher weights on the development elements, the priorities may vary, as indicated in Table 7.
If three times the weight ( = 3) is assigned to the data readiness level and twice the weight () is allocated to the maturity level of the technology, the results presented in Table 7 can be obtained. From the perspective of the system development department, the priority can be calculated in the order of processing > dissection > analysis > collection > planning.

Writing-Original draft preparation, S.C.; Writing-Review and editing, W.S., N.K., and J.J.; Supervision, H.P.I. All authors have read and agreed to the published version of the manuscript.

This research was supported by Institute of Information & communications Technology Planning & Evaluation (IITP) grant funded by the Korea government (MSIT) (No. 2019-0-00099, Formal Specification of Smart Contract). 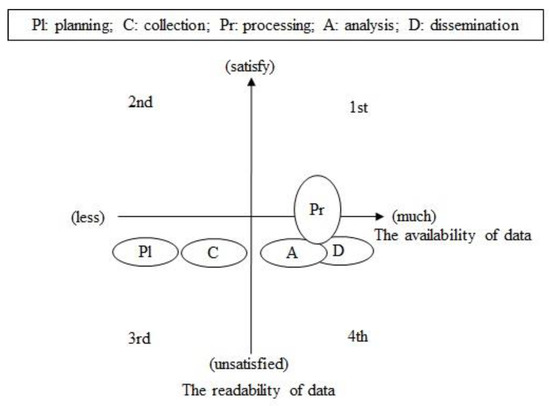 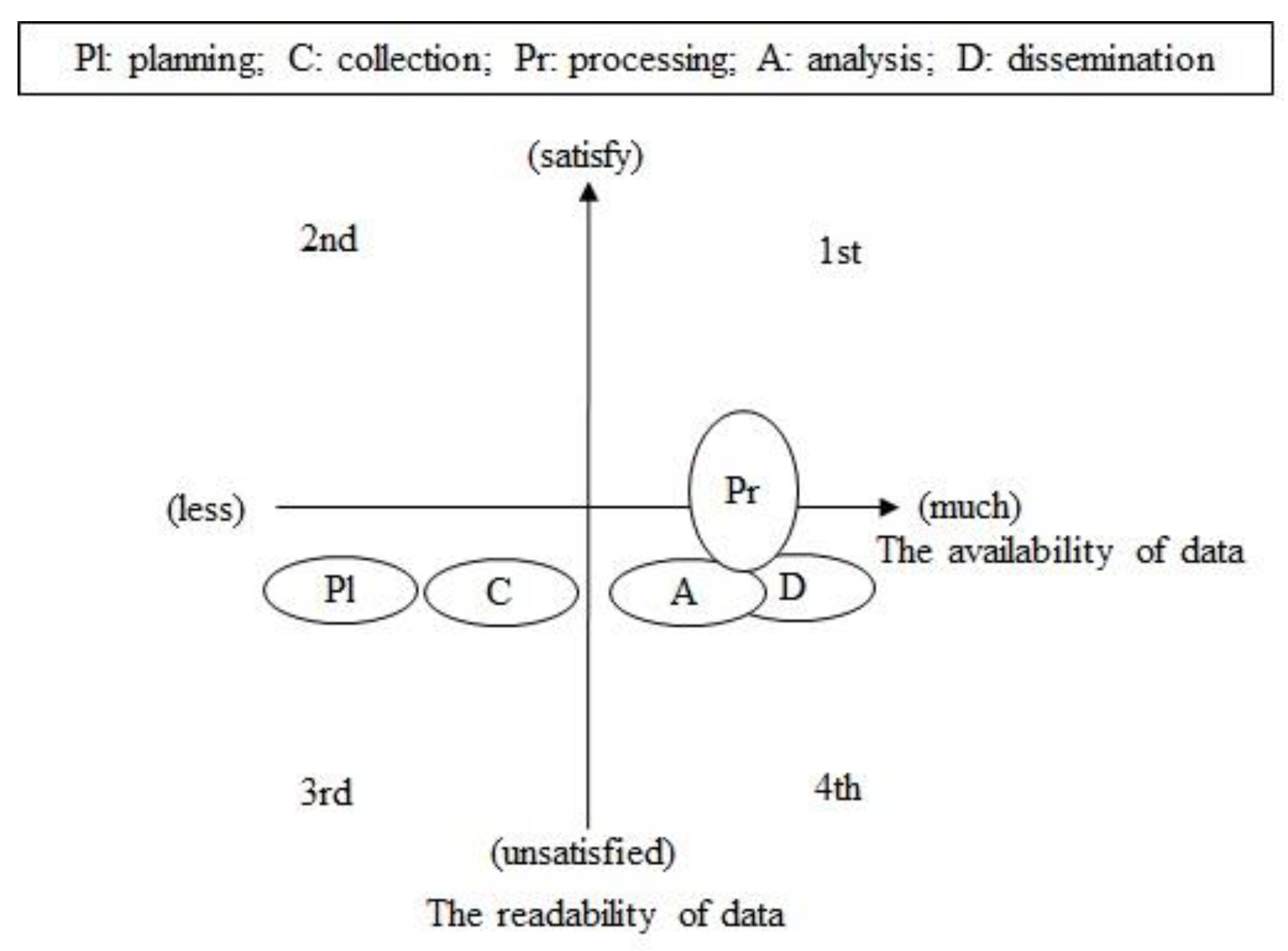 Table 7. Priority-determination result for system development department.
Table 7. Priority-determination result for system development department.
Weight is allocated to evaluation factors related to development: = 3 and .
© 2020 by the authors. Licensee MDPI, Basel, Switzerland. This article is an open access article distributed under the terms and conditions of the Creative Commons Attribution (CC BY) license (http://creativecommons.org/licenses/by/4.0/).
We use cookies on our website to ensure you get the best experience. Read more about our cookies here.
Accept
We have just recently launched a new version of our website. Help us to further improve by taking part in this short 5 minute survey here. here.
Never show this again