:
When high-amplitude, short-duration electric pulses are applied to cells the permeability of their membranes is increased. From the biological point of view, the phenomenon is quite well understood, however, it is important to develop accurate numerical models to investigate the electroporation effectiveness in terms of electrical, geometrical and physical parameters. To this aim, in this paper, we illustrate a spatio–temporal, non-linear, and dispersive multiphysics approach to study the electroporation in irregularly nucleated shaped cells. The model couples the Maxwell equations with the partial differential equation describing the creation and closure of pores as well as the evolution of the pore size. The dispersive properties of biological media and the irregular geometries of the membranes have been described using the multi-relaxation Debye-based relationship and the Gielis superformula, respectively. Numerical simulations highlight the importance to include in the model the spatial and temporal evolution of the pore radius. In fact, the obtained numerical results show significant discrepancies between our model and the one in which the pore radius dynamics is negligible.
Keywords:
electroporation; pulsed electric field; nucleated irregularly shaped cells; numerical model; pore radius evolution

Electroporation (EP) is a non-thermal electromagnetic phenomenon in which the cell membrane permeability increases when exposed to a high voltage pulsed electric field (PEF). As a result, exogenous molecules that usually cannot cross the membrane barrier can enter the cytoplasm and nucleoplasm. EP is used in clinical and medical practice for various applications such as electrochemotherapy, gene therapy, DNA vaccination and nonthermal ablation [1,2]. Electroporation combined with chemotherapeutic drugs was found to be a very effective treatment both for killing tumor cells in vitro and for treating cancer in humans [3]. The effectiveness of the electroporation process depends on various physical and chemical parameters, such as the molecular composition of the membrane, but above all, on the parameters of electric pulses such as duration, frequency, rise and fall time, amplitude and number of pulses [4,5]. Conventional methods of electroporation use pulses of micro-millisecond duration to electroporate the cells. In this case, only the plasma membrane is electroporated since the cytoplasm and the extracellular medium act like good conductors. PEF with duration from the sub-microsecond to the nanosecond induce the electroporation of the plasma membrane as well as the permeabilization of the intracellular membranes. Furthermore, the electroporation process efficiency also depends on the type of cell [6], the mutual interaction with other cells and the cell positioning with respect to the electrodes [7]. Although electroporation is widely used in medical practice, EP protocols are very empirical as well as the electroporation process is not completely known. However, the accuracy of the mathematical model adopted to study the electroporation process has a considerable impact on the experimental analysis and on the choice of the EP parameters. Several numerical models have been proposed in literature to study the EP. Most of them use simplified geometric shapes to describe biological membranes as well as consider cellular structures as non-dispersive media. Moreover, in order to simplify the numerical calculation and to reduce the computational efforts, other methods do not take into account the thinness of the membranes. Among the different models of EP, studies implementing the dynamics of the pore radius have been also presented even if they were based on a simple cell geometry [8,9]. In view of these weaknesses, the present study is aimed at the evaluation of the transmembrane voltage (TMV) and pore density in a nucleated irregular-shaped cell. To this aim, a non-linear and dispersive numerical algorithm was developed. The dielectric response of cellular structures was modeled by incorporating the multi-relaxation Debye-based equations. Furthermore, the irregular shape of the cell was modeled by using the Gielis superformula. The Maxwell equations were solved in conjunction with the asymptotic Smoluchowski equation and the partial differential equations describing the spatial and time evolution of the size of the pores. Using the developed numerical algorithm, the electroporation process has been evaluated exposing the biological cell to short and long nanosecond pulses. Thus a comparison among models in which the pore radius dynamics are taken into account and the one in which it is neglected has been performed.

As shown in Figure 1, the biological cell considered in the proposed study is the nucleated cancer-like cell. The cell shape is modelled by using the Gielis superformula [4,6,7,10,11]. The relevance of the Gielis superformula to model the cell membranes perimeter was previously highlighted in [4]. Contrary to the canonical spherical cell-based model, an unconventional behavior of irregularly shaped cells was observed. In fact, the TMV does not have a conventional cosine type behavior and moreover, non-homogeneous EP effects occur along the cell membrane perimeter. In particular, the radius vectors and describing the plasma and nuclear membranes, respectively, are given by: where , , and are positive real numbers, , are strictly positive real numbers, and are appropriate scaling factors. The plasma membrane boundary of the selected cell can be well-approximated by using the superformula parameters , , , and as well as the nuclear membrane can be modelled by using the following Gielis parameters , , , and . Moreover, to generate the cell membrane thinness, a particular extrusion operator transformation has been suitably implemented. In particular, the following equations was implemented where are the coordinates of the internal side of the membrane, are the coordinates of the external side of the membrane, h is the membrane thickness.

The interaction of the PEF with the dielectric medium of cell compartment can be investigated by considering the electric polarization, i.e., the electric field induced disturbance of the charge distribution. From the macroscopic point of view, such interaction is generally due to different phenomena as the orientation of dipoles, ionic diffusion, interfacial polarization etc. Dielectric dispersion is the corresponding frequency dependence of permittivity which typically display extremely high dielectric constants at low frequencies, falling off in more or less distinct steps as the excitation frequency is increased. Cell suspensions typically exhibit a significant -dispersion in the radio frequency range. This is due to the Maxwell–Wagner effect at the interface between the intra or extracellular solution and the phospholipid membrane. They also display a large -dispersion at low frequency caused by the sarcoplasmic reticulum, gap junctions, and counterion relaxation on the cell surface. Moreover, an additive -dispersion coming from the dispersion of organelles appears as a small tail to the large cell membrane -dispersion [14]. In our numerical analysis, the following Debye-based relationship has been used to model the dispersive behavior of each cellular compartment [4,7,10]. where M is the order of Debye equation, is the high frequency permittivity, are the relaxation amplitudes and are the relaxation times. As the dielectric relaxation of the plasma () and nuclear () membrane takes place in the MHz region, a second order Debye equation has been used to describe their dispersive properties. Instead, the dielectric relaxation of the extracellular medium (), the cytoplasm () and the nucleoplasm () occurs in the GHz zone and thus a first order Debye equation has been adopted to model the dispersive properties of these materials. The time domain relations pertaining the polarization vector and , corresponding to the first and the second order Debye dispersion model, can be formulated as: where and

In this paper, a nonlinear dispersive numerical algorithm of electroporation for irregularly nucleated shaped cells including the variation of pore radius has been presented. The developed algorithm solves simultaneously the Maxwell equations, the Smolouchouski equation and the equation describing the dynamic of the pore radii evolution. In particular, the presented algorithm describes the irregular perimeter of the and membranes using the Gielis superformula and it considers the dielectric dispersion properties of cell compartments using a Debye formulation. With reference to a nucleated cancer-like cell, a number of simulations have been carried out in order to compare the model with the pore radius variable and the one characterized by a constant pore radius. The performed analysis highlights a discrepancy between the two models underlining the importance to take into account in the numerical algorithm the differential equation describing the variation of the pore size. 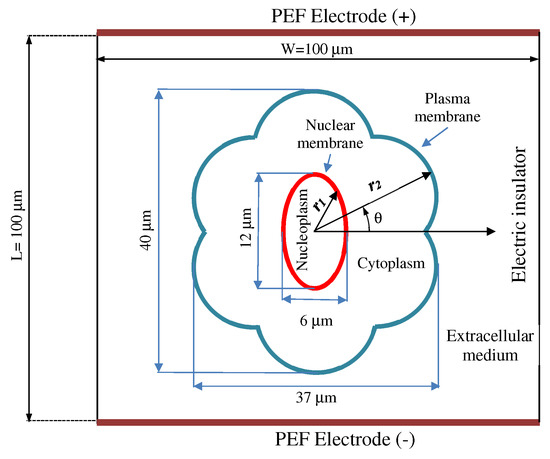 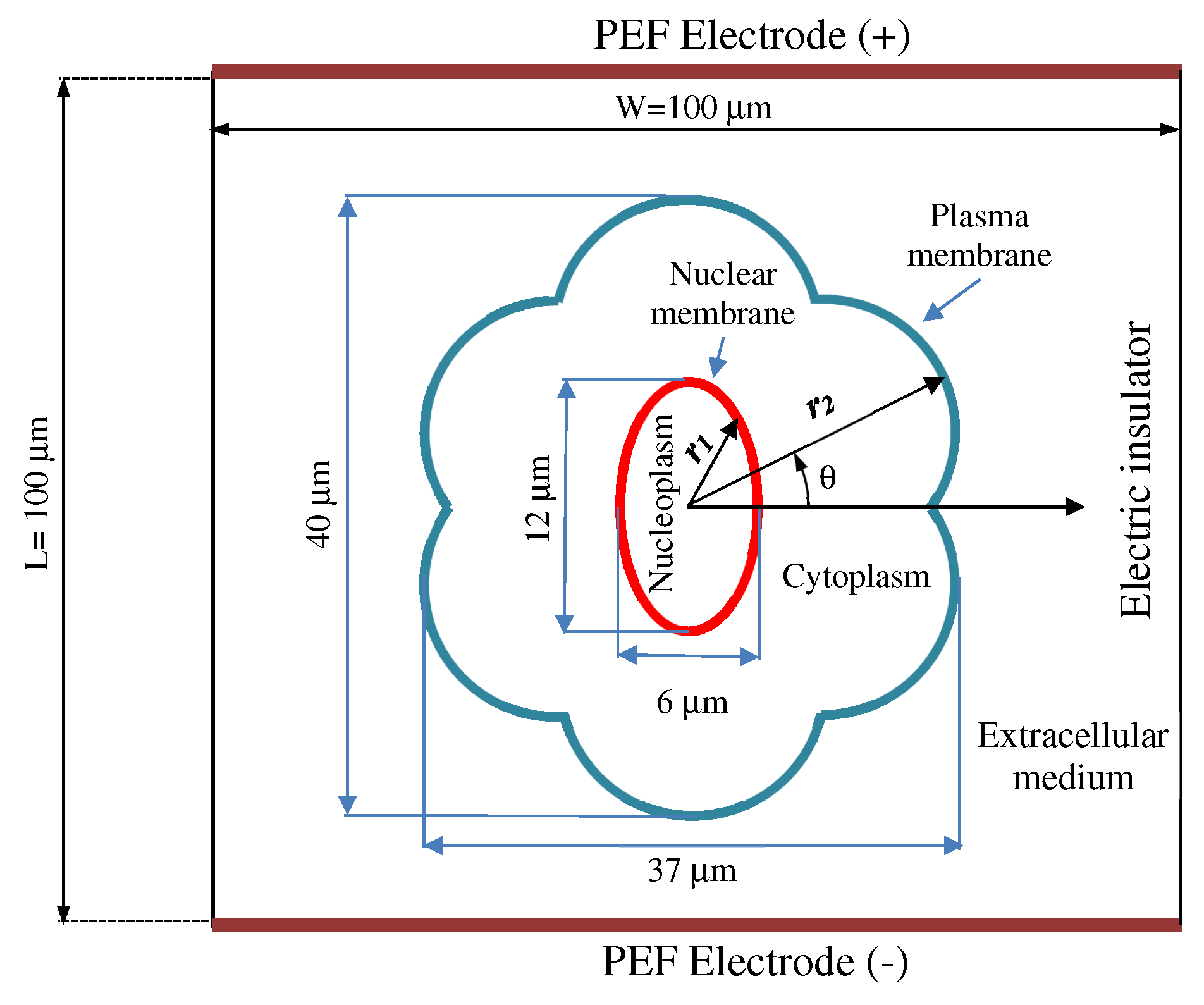 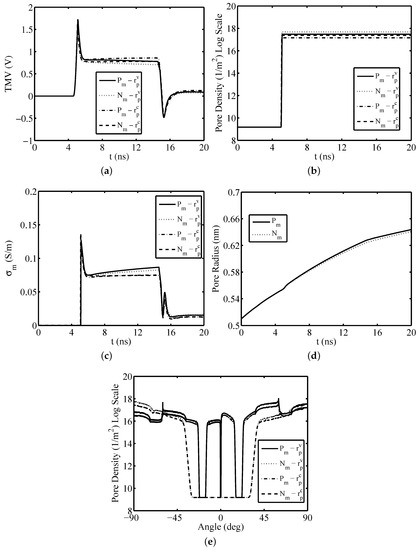 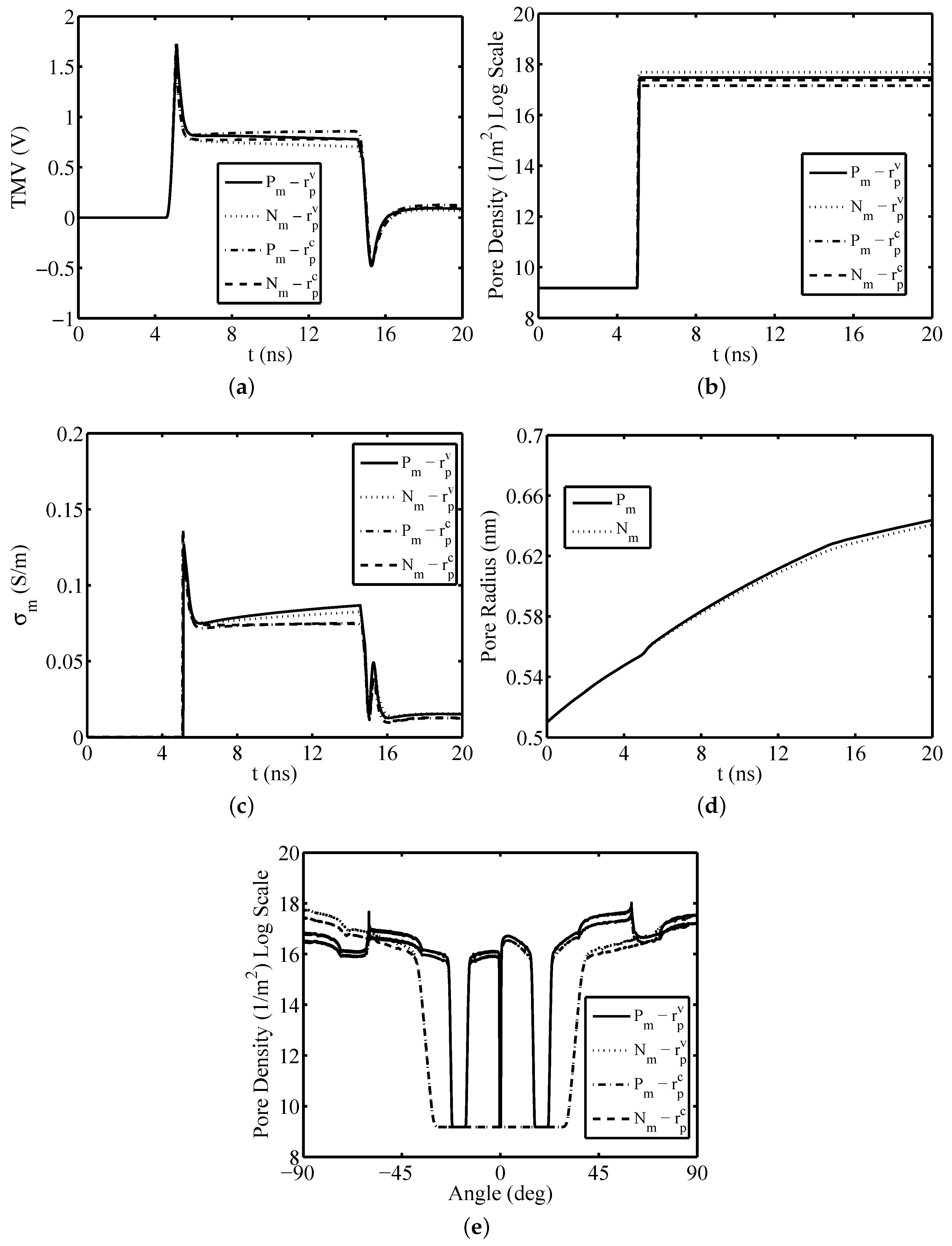 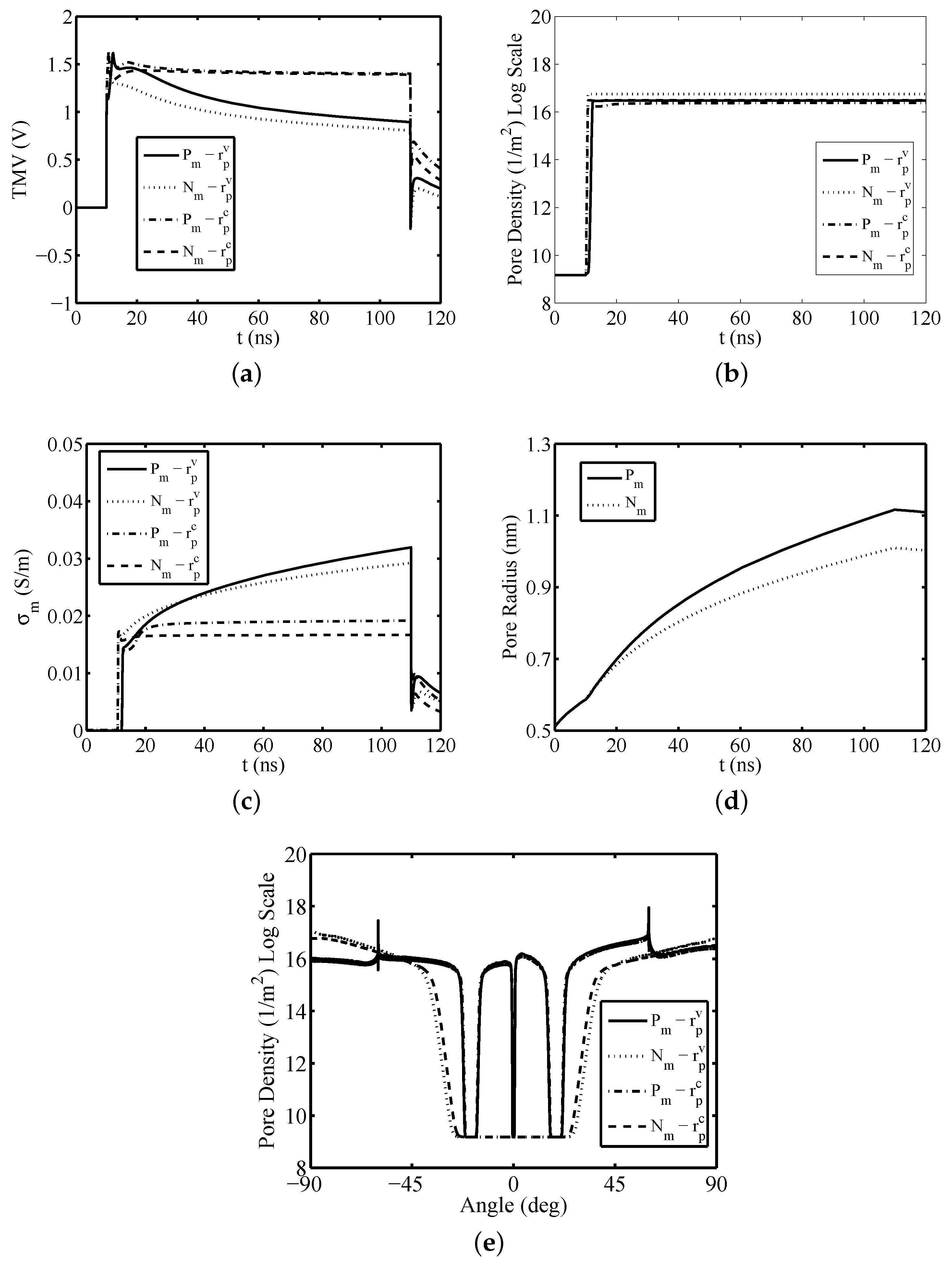 Table 1. Polarization, electric, geometrical, and electroporation (EP) parameters.
Table 1. Polarization, electric, geometrical, and electroporation (EP) parameters.
© 2019 by the authors. Licensee MDPI, Basel, Switzerland. This article is an open access article distributed under the terms and conditions of the Creative Commons Attribution (CC BY) license (http://creativecommons.org/licenses/by/4.0/).
We use cookies on our website to ensure you get the best experience. Read more about our cookies here.
Accept
We have just recently launched a new version of our website. Help us to further improve by taking part in this short 5 minute survey here. here.
Never show this again