As semiconductor processes enter the nanoscale, system-on-chip (SoC) interconnects suffer from link aging owing to negative bias temperature instability (NBTI), hot carrier injection (HCI), and electromigration. In network-on-chip (NoC) for heterogeneous manycore systems, there is a difference in the aging speed of links depending on the location and utilization of resources. In this paper, we propose a heterogeneous manycore NoC topology synthesis that predicts the aging effect of each link and deploys routers and error correction code (ECC) logic. Aging-aware ECC logic is added to each link to achieve the same link lifetime with less area and latency than the Bose-Chaudhuri-Hocquenghem (BCH) logic. Moreover, based on the modified genetic algorithm, we search for a solution that minimizes the average latency while ensuring the link lifetime by changing the number of routers, location, and network connectivity. Simulation results demonstrate that the aging-aware topology synthesis reduces the average latency of the network by up to 26.68% compared with the aging analysis and the addition of ECC logic on the link after the topology synthesis. Furthermore, topology synthesis with aging-aware ECC logic reduces the maximum average latency by up to 39.49% compared with added BCH logic. View Full-Text
Keywords: heterogeneous manycore system; network-on-chip; topology synthesis; aging resilience; error correction code; genetic algorithm heterogeneous manycore system; network-on-chip; topology synthesis; aging resilience; error correction code; genetic algorithm
►▼ Show Figures 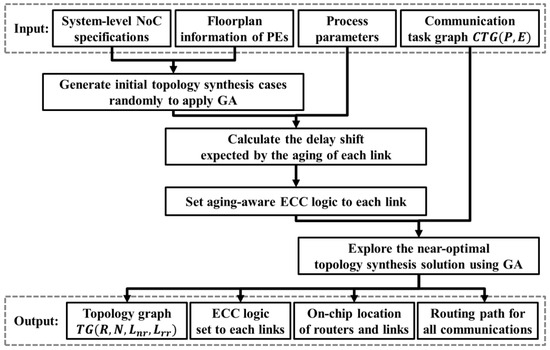