Operational amplifiers generally have outstanding amplified ability on differential-mode signals, their inputs have higher input impedance and they have excellent ability to suppress common mode signals. Therefore, their control block diagram can be shown in Figure 2. In reference [1], the transfer function A(s) can be expressed as: where S1 and S2 are poles of the operational amplifier and A is the open loop voltage gain. Based on this characteristic of the operational amplifier, the operational amplifier can be used as the controller of the circuit and the classical feedback control theory can be applied in the analog circuit design. The schematic and the control block diagram of the analog circuit can be shown in Figure 3 and Figure 4, respectively.
In the figures, G(s) is the transfer function of the forward network and H(s) is the transfer function of the feedback network. The forward network can use inner-loop feedback control to further weaken the nonlinearity of the circuit model, which makes the setting of the system easier. There are some methods to realize the inner-loop control, and the common and sensible method is utilizing the characteristics of electronic components. In the introduction, it is such an example that applies the MOSFET as the output stage of the circuit, and the circuit principle and the control block diagram of the MOSFET are shown in the Figure 5.
In the control block diagram, B(s) is the RC filter composed by Rg and the input capacitor of the gate of the MOSFET. The relationship between Id and V is generally a nonlinear function, and the voltage V is the voltage difference between Vg and Vs. The local linearization of the function can be expressed by Equation (3): where V0 is the bias voltage. The Equation (3) can be further expressed by Equation (4):
Based on Equation (4), the model of the MOSFET can be expressed by Figure 6. In the model, K is the mutual conductance parameter of the MOSFET, which can be obtained from the manual of the MOSFET, and the parameter P can be abstracted as a disturbance.
Based on the models of the MOSFET and the operational amplifier, the control block diagram of the circuit mentioned in the introduction can be expressed as Figure 7.
Based on the control block diagram, the transfer function of the system can be described as:
In Equation (5), the parameter K1 can be expressed by Equation (6): where RL is the resistance value of the load. Based on the control block diagram shown in Figure 7, the load regulation rate of the voltage source in the introduction is caused by the steady-state error of the control system as the load RL is changed. In order to reduce the steady-state error, it is liable to increase the open-loop gain of the whole system as much as possible when the system is stable.
The proposed method, exploiting the characteristics of the operational amplifier and some electronic components, transforms the design of the analog circuit into the design and calibration of the control systems, and the method can be effectively applied in the design of power amplifiers for driving piezoelectric stack actuators.

3.1. The Model of the Power Amplifier and Its Stability Analysis

Software Cadence 16.6 is a powerful tool to simulate the analog circuit, and it is used to implement the simulation of the power amplifier. In the simulation, the positive and negative powers are set as +130 V and −15 V, respectively.
Figure 11 presents the simulated amplitude–frequency characteristic of the power amplifier. It is easy to achieve the conclusions that the passband magnification is 28.04 dB, and the system bandwidth and the 0 dB bandwidth are about 42 kHz and 1.7 MHz, respectively. In analog circuit analysis, the magnification is determined by H(s) during the low frequency range, the value is 25.24 times (about 28.04 dB) and the simulation results are in line with this principle.
The responses of the designed power amplifier to periodic signals such as a sinusoidal wave and square wave are important ways to value the circuit performances. Connecting the input to a sinusoidal wave which has 5 V amplitude, 2.5 V offset and 100 Hz frequency, the simulated input–output waveforms are described in Figure 12. When connecting the input to a square wave which has 5 V amplitude, 100 Hz frequency and 10 µs rising and failing time, the simulated input–output waveforms are described in Figure 13, which contains the details of the rising edge and falling edge. According to Figure 11, Figure 12 and Figure 13 the input signals are well amplified by the power amplifier and the output signals have on obvious distortion. The transient response agrees with the amplitude–frequency characteristic of the power amplifier. The reason for setting the frequency of the periodic at 100 Hz is that the motion frequency of the mechanism which the power amplifier is applied in is lower than 100 Hz.
The simulated results are achieved by the PSpice circuit model, and the model has concrete values for the parameters which are uncertain in theoretical analysis. The amplitude–frequency characteristic and the transient response achieved by simulation show that the designed power amplifier has the same properties as a closed-loop control system, which is in line with the theoretical analysis.

4.1. The Model of the Power Amplifier and Its Stability Analysis

High-voltage operational amplifiers are more expensive than general operational amplifiers, and it is meaningful to apply general operational amplifiers to design power amplifiers for driving piezoelectric stack actuators. Based on the proposed method, the schematic and the control block diagram of the designed power amplifier are shown in Figure 19 and Figure 20. Just as shown in the figures, the operational amplifier OPA228U is selected, and it forms the subtracter and the controller A(s). The resistance R5 and the input capacitance of J1 form the filter D(s), and the feedback network is realized by R9-10 and C2 whose transfer function is H(s). The amplification of voltage and current is realized by the transistor circuit, and the transfer function of the circuit is X(s). The transfer function X(s) can be decomposed into many functional parts. Transistors J1, Q1–3, resistors R1–2, R4 and R7 realize the voltage amplification for the circuit, and the linearized amplification can be expressed as KA. The resistance R3 or R6 and the input capacitance of the next stage form the filter B(s). Just like the power amplifier designed by the high-voltage operational amplifiers, the MOSFET is modelled as the inner feedback control loop, and the load is the capacitor CL which replaces the piezoelectric stack actuators. The circuit uses a feedback network for correction, the feedback network is realized by R8 and C1 and the transfer function is HA(s).
The inner loop realized by MOSFET can reduce the impact of load CL. The transfer function X(s) is: where M(s) is a function of the inner loop realized by MOSFET. The simplification of Equation (8) is considered such that the amplifier realized by the transistors generally has a high magnification. In the equation, HA(s) can be expressed as:
The circuit parameters of the models in Figure 20 can be found in the manuals of the electric components. The parameters are shown in Table 2.
Based on the information in Table 2, the overall transfer function can be expressed as:
The power amplifier for driving piezoelectric stack actuators needs the ability to drive a large capacitor, and the stability of the system is the most important concern in system analysis. Considering that the open-loop gain of the system would be changed 0.5–1.5 times, the change is introduced by the dispersion of circuit parameter, and the root locus of the system is shown in Figure 21.
Analyzing the root locus of the circuit, the roots of the closed loop control system always have negative real parts as the gain of the circuit changes, so that the conclusion can be drawn that the circuit is stable as the open-loop gain is variable in its range. As qualitative analysis has been obtained by the control model of the circuit, the more concrete performance of the power amplifier can achieved by PSpice simulation. The control system of the circuit is modelled to draw definite conclusions and the concrete performance of the circuit is achieved by simulation: these are the essences of the proposed design method.

4.2. The Simulated and Experimental Results

5. Tests with Mechanical Stage and Some Comparisons

This research was funded in part by the National Science and Technology Major Project of China (Grant No. 2009ZX02205).

The authors declare that they have no conflict of interest in this work. 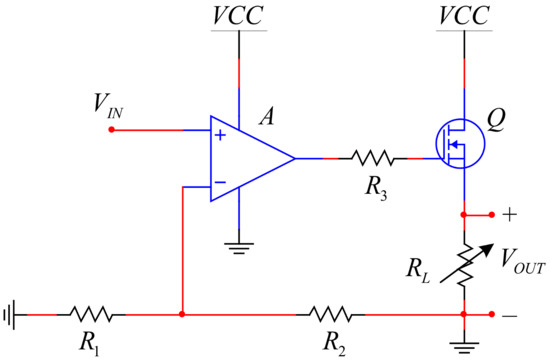 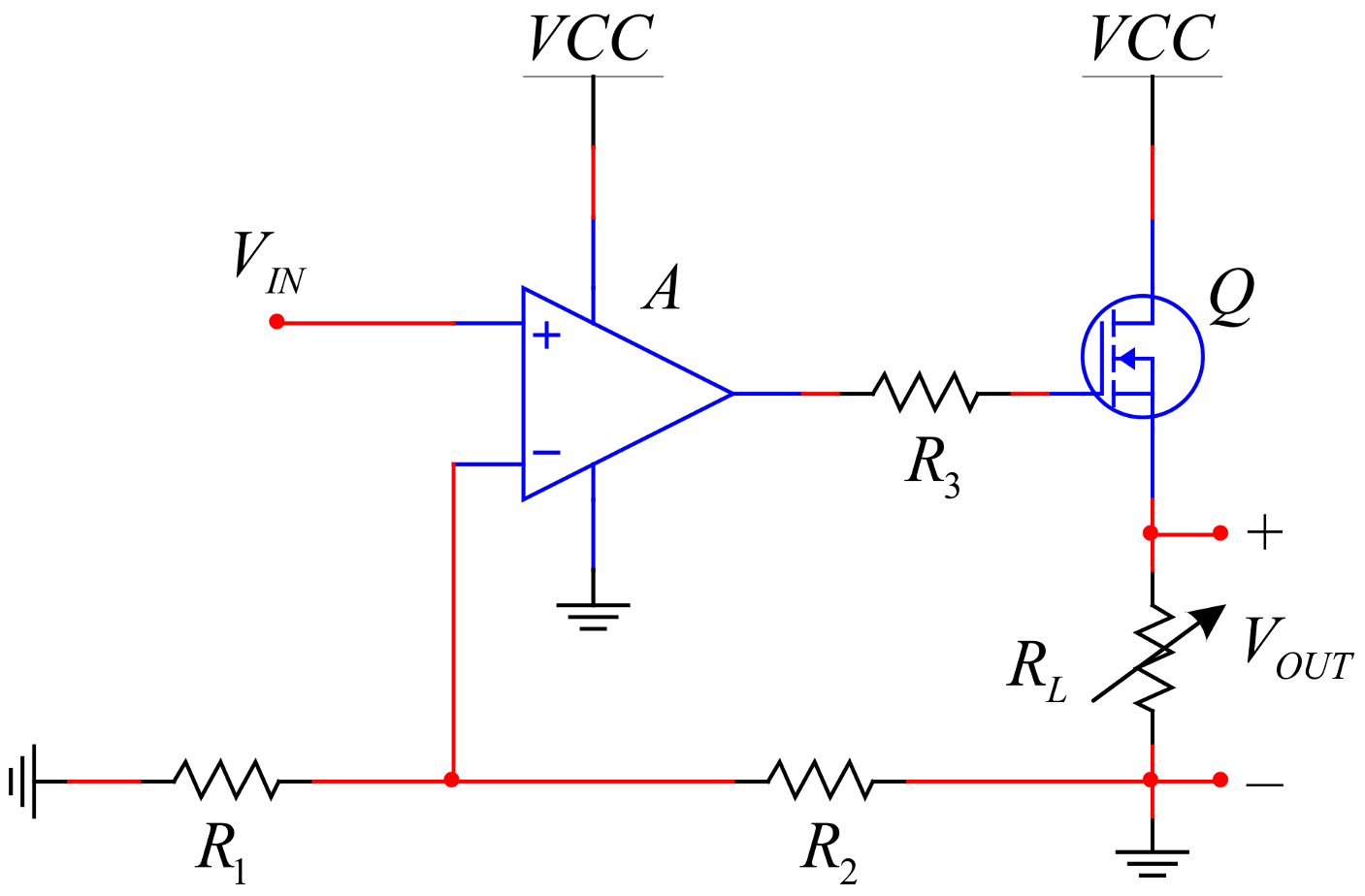 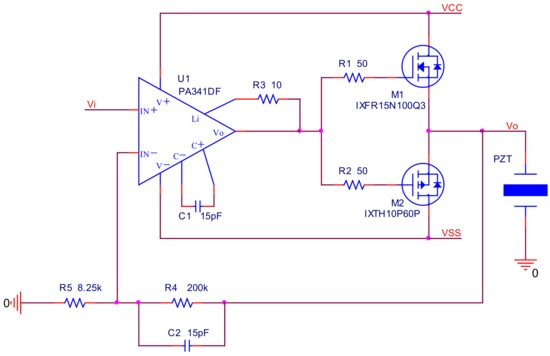 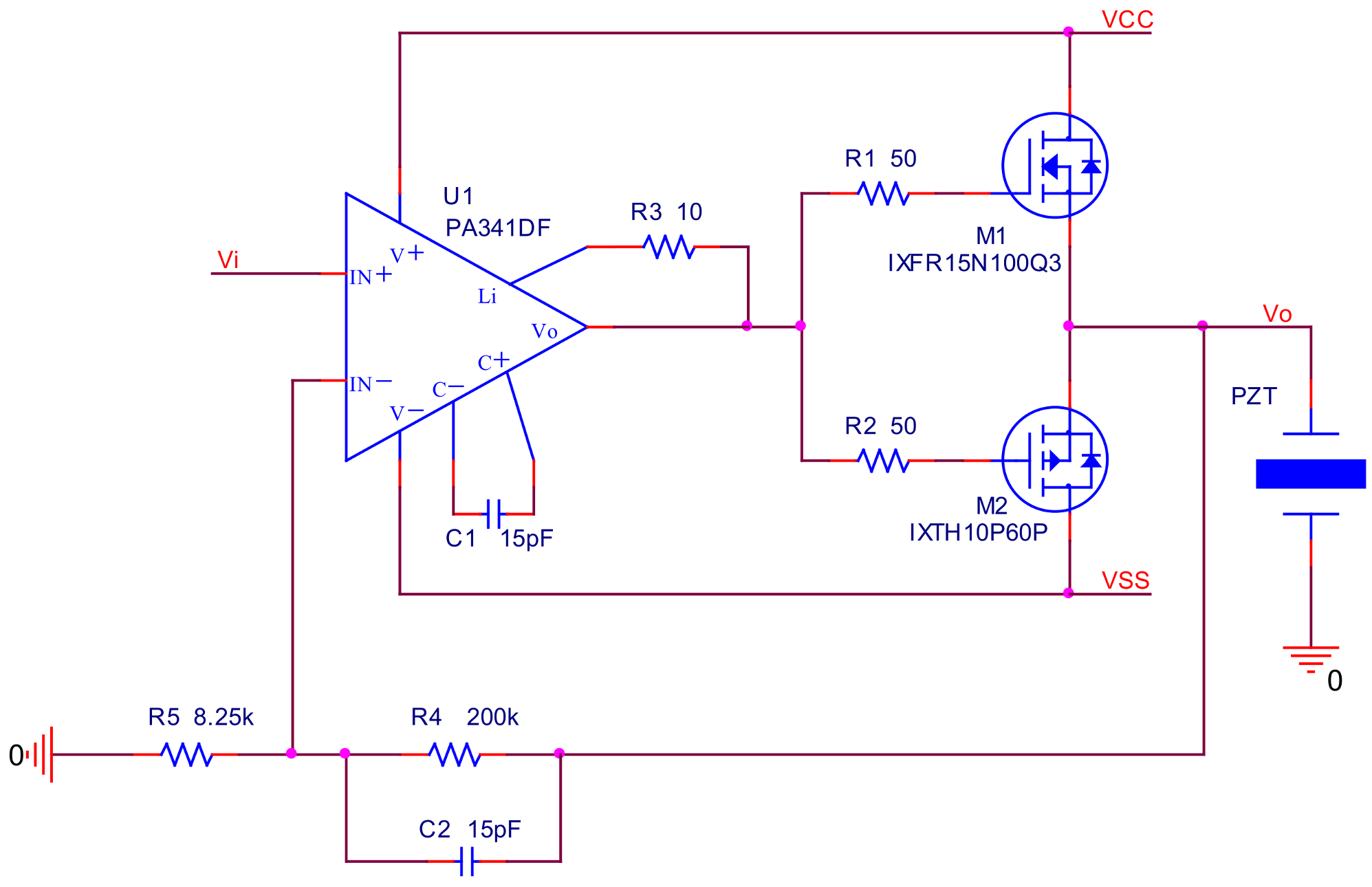 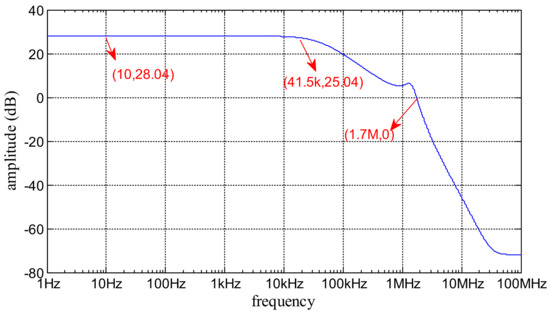 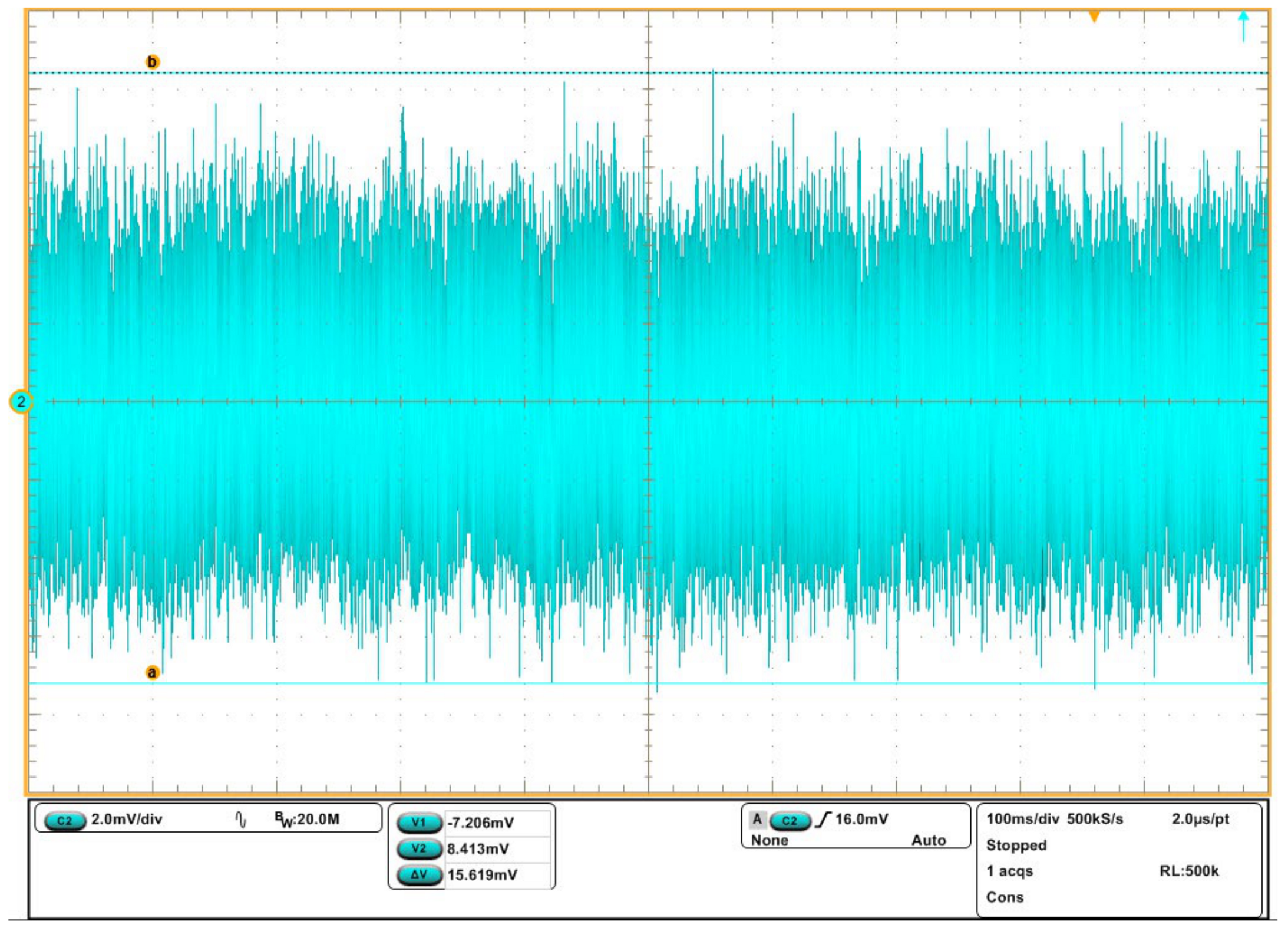 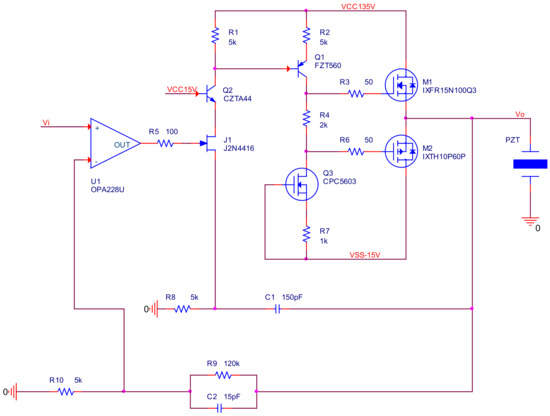 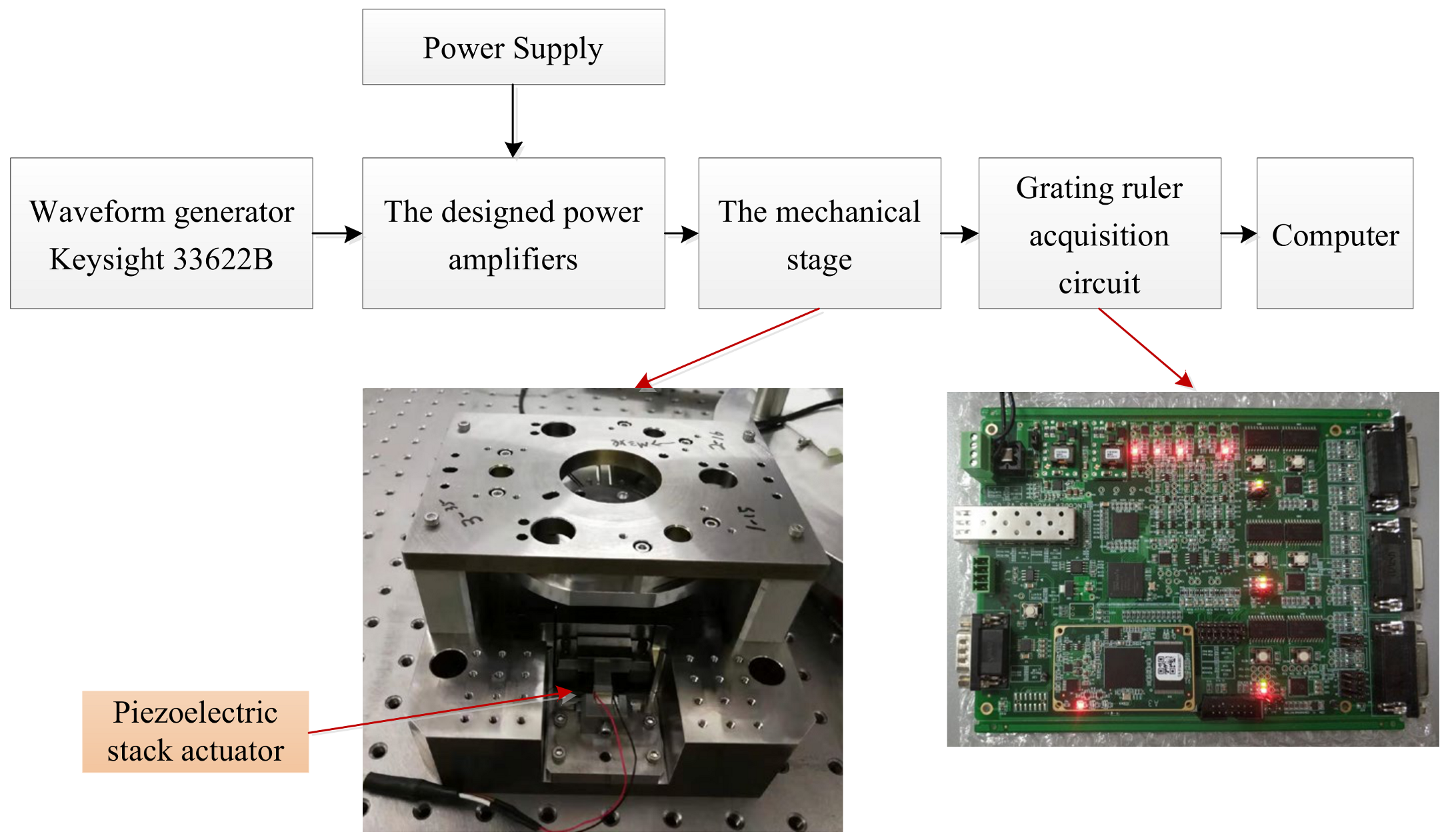 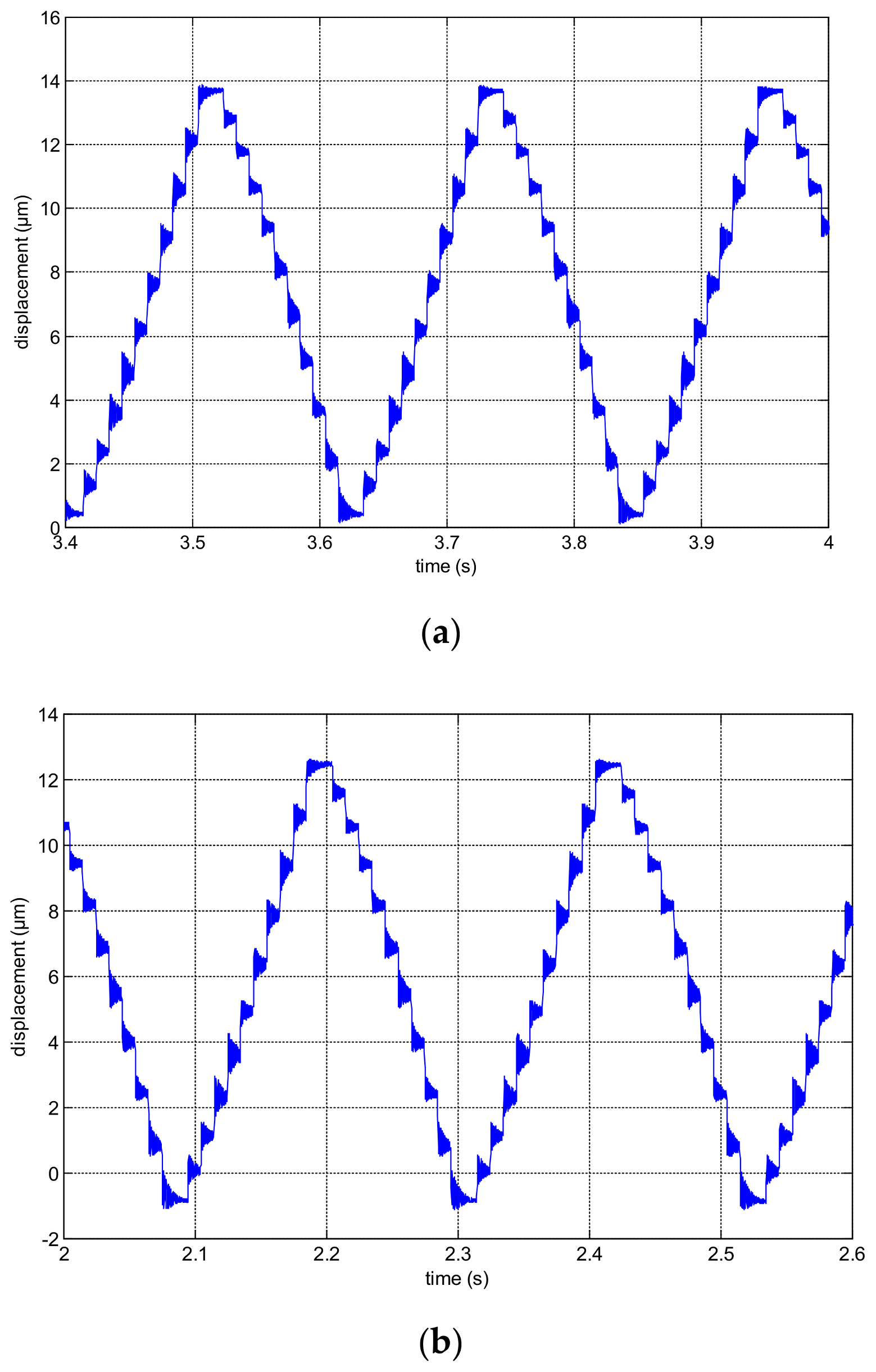