The Connection between a Suspended Sediments and Reservoir Siltation: Empirical Analysis in the Maziarnia Reservoir, Poland

This paper presents research on the influence of suspended sediments on selected aspects of a reservoir’s functioning. As the amount of sediment suspended in water (SS) there was found to correlate significantly with sedimentation rate (Us), it was possible to develop a function allowing the rate of accumulation of sediments to be predicted by reference to known amounts of suspended sediment. The latter factor was also shown to correlate significantly with the content of organic matter in suspension (OMSS), in sediment captured in a sediment trap (OMS), and of bottom sediment (OMSB). Analysis of amounts of suspended sediment can provide for estimates of total loads of organic pollutants deposited in the sediments of a reservoir. A further significant correlation with SS was noted for the concentration of total phosphorus in water (TPW), confirming the importance of internal production where the circulation of this biogenic substance in a reservoir ecosystem is concerned. Analysis of stable carbon isotopes in turn showed that entrapped sediments were depleted of—or enriched in—13C, in line with whether concentrations of total P in those sediments (TPS) were at their highest or lowest levels. This dependent relationship may thus be of key importance in assessing sources of phosphorus, as well as in forecasting concentrations present in reservoir sediments. The results obtained make it clear that sediments suspended in the water of a reservoir unify phenomena and processes ongoing there, between elements of the water-sediment system. View Full-Text
Keywords: suspended sediment; sedimentation rate; reservoir siltation; stable carbon isotopes; organic matter; biogenic compounds; phosphorus load suspended sediment; sedimentation rate; reservoir siltation; stable carbon isotopes; organic matter; biogenic compounds; phosphorus load
►▼ Show Figures 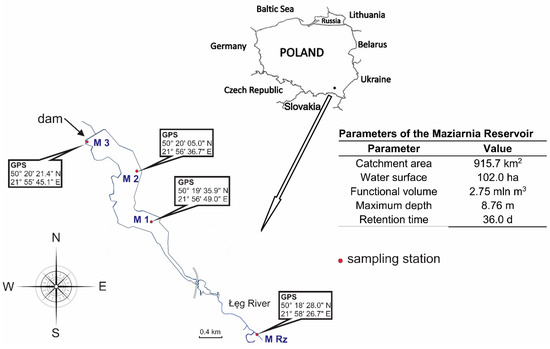