Consumer Willingness and Acceptance of Smart Meters in Indonesia

Indonesia is the fourth most populous country in the world and is currently facing some challenges, such as pollution and a growing energy demand. One of the solutions to these problems is upgrading the electricity transmission and distribution system to avoid losses of energy, and encourage consumer engagement in energy saving as well as energy generation. The government of Indonesia has initiated projects for smart grids and advanced metering infrastructure (AMI), but consumer awareness and willingness to accept these new technologies is still uncertain. This study focused on analyzing consumers’ knowledge and willingness to accept one of the key components in grid modernization, being smart meters (SM). An online questionnaire was used to record responses from 518 social media users from different parts of Indonesia. The analysis shows that, among social media users who are seen as early adopters of technology, there is certainly a lack of awareness about SM, but they are largely open towards the acceptance of SM. Based on the findings, we have also drawn recommendations for energy companies, which would help in raising consumer awareness, as well as acceptance of SM in Indonesia. View Full-Text
Keywords: smart meters; sustainable development; Indonesian energy market; consumers’ preferences; on-line questionnaire; social media users smart meters; sustainable development; Indonesian energy market; consumers’ preferences; on-line questionnaire; social media users
►▼ Show Figures 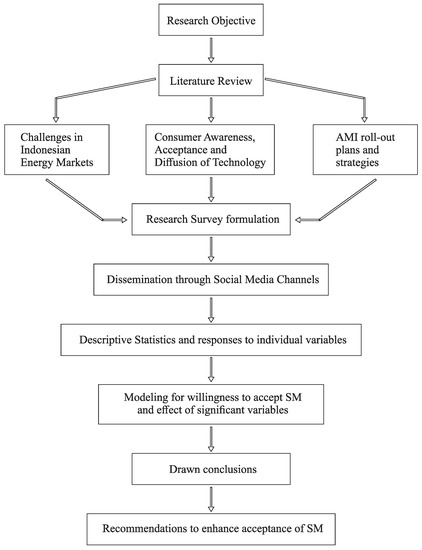