Impact of Natural Resource Rents and Institutional Quality on Human Capital: A Case Study of the United Arab Emirates
Next Article in Special Issue

Geoheritage as a Tool for Environmental Management: A Case Study in Northern Malta (Central Mediterranean Sea)
Previous Article in Journal

A Social Analysis of the Olive Oil Sector: The Role of Family Business
Previous Article in Special Issue

In the last decades, the geotourism has shown a considerable growth all over the world and it is appreciated and accepted as a useful tool for promoting natural and cultural heritage and for fostering local and regional economic development, especially within rural areas. Geotourism focus especially on the geological and geomorphological aspects of the landscape; however, according to the current holistic approach, it also builds on the close relations between geodiversity and other assets of the territory, such as biodiversity, archaeological and cultural values, gastronomy or architecture. Currently, geotourism activities are promoted mainly within geoparks, but other regions also possess an important geotourism potential. A complex assessment of the geotourism resources of a particular area is crucial for geotourism-development. The paper presents two case studies from Southern Moravia (Czech Republic) where the assessment of geotourism’s potential was made by using the geomorphosite concept and extended SWOT analysis. Results show that these areas (situated outside the geoparks or large-scale protected areas and not far from a big city) have considerable potential for geotourism development, and geodiversity can be considered an important resource for local and regional development. Based on this, conclusions about the possibilities of geotourism development outside the geoparks are outlined. View Full-Text
Keywords: geodiversity; SWOT analysis; rural regions; geomorphosites geodiversity; SWOT analysis; rural regions; geomorphosites
►▼ Show Figures 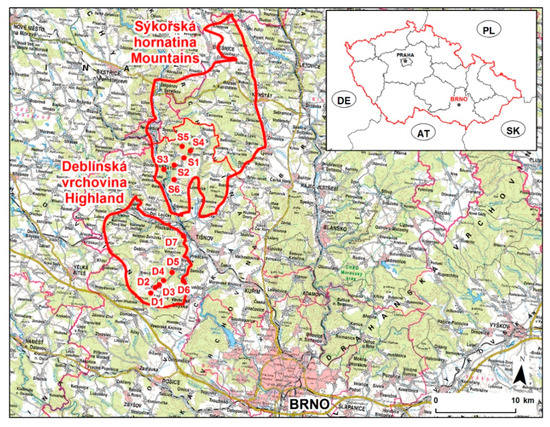