Erratum: Wellmer, F.-W.; Scholz, R.W. Putting Phosphorus First: The Need to Know and Right to Know Call for a Revised Hierarchy of Natural Resources. Resources 2017, 6, 20
Next Article in Special Issue

Assessment of the Successes and Failures of Decentralized Energy Solutions and Implications for the Water–Energy–Food Security Nexus: Case Studies from Developing Countries
Previous Article in Special Issue

Co-composted dewatered faecal sludge (FS) with organic fractions of municipal solid waste (MSW) has a high potential to be used as an agricultural resource in Sri Lanka. In addition to options for cost recovery in waste management, closing the nutrient and carbon cycles between urban and rural areas, substitution of mineral fertilizers, reduced pollution. and the restoration of degraded arable land are possible with important benefits. Up to now little is known about the usage of FS-MSW as fertilizer and it needs to be studied in order to achieve a better understanding and generate application recommendations. The aim of these experiments has been to evaluate the possibility of substituting mineral fertilization. Two field experiments were conducted on sandy loam to assess the effects of MSW compost and FS-MSW co-compost, its pelletized forms, and mineral-enriched FS-MSW on crop growth. As a short-term crop Raphanus sativus “Beeralu rabu” (radish) was studied for 50 days in a randomized complete block design (RCDB). Results show that, under drought conditions, FS-MSW co-compost increased the yield significantly, while MSW and FS-MSW compost enabled the highest survival rate of the plants. Similarly, the second field trial with a long-term crop, Capsicum anuum “CA-8” (capsicum), was planted as RCBD, using the same treatments, for a cultivation period of 120 days. Results display that during a drought followed by water saturated soil conditions co-compost treatments achieved comparable yields and increased the survival rate significantly compared to the control, fertilized with urea, triple super phosphate, and muriate of potash. Cost-benefit analysis (CBA) revealed that pelletizing decreased the monetary benefits if only fertilizer value is considered. It can be concluded that, under drought and water stress, co-compost ensures comparable yields and enables more resistance, but might not be economical viable as a one-crop fertilizer. These findings need to be validated with further trials under different climate regimes and soils. View Full-Text
Keywords: compost; agriculture; resource recovery and reuse compost; agriculture; resource recovery and reuse
►▼ Show Figures 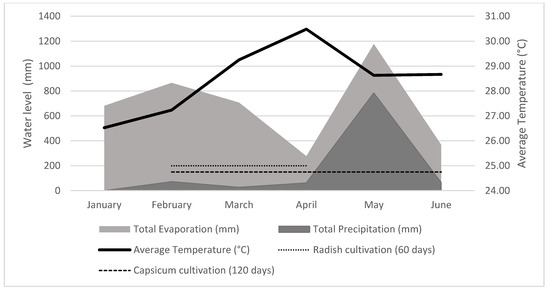