Pathways to Shape the Bioeconomy
Previous Article in Journal

The Impact of Pay-As-You-Throw Schemes on Municipal Solid Waste Management: The Exemplar Case of the County of Aschaffenburg, Germany

Access and Benefit Sharing under the Convention on Biological Diversity and Its Protocol: What Can Some Numbers Tell Us about the Effectiveness of the Regulatory Regime?

The Convention on Biological Diversity (CBD), adopted in 1992 and entered into force at the end of 1993, established a global regime on access to genetic resources (GR) and sharing of benefits arising from their utilization (Access and Benefit Sharing (ABS) regime). Its protocol—the Nagoya Protocol (NP)—which entered into force 21 years later in 2014, clears up some terminological ambiguities of the Convention, clarifies and develops several procedural and instrumental elements of the regime, and obliges States Parties to implement some of its provisions, including the core instrument of the regime: the bilateral ABS agreement between users and providers of GR, that became a condition for obtaining access to the resource. However, scholars who analyzed the ABS regime as well as its official bodies find, and sometimes deplore, the small number of ABS agreements concluded so far, under the CBD as under the NP. This paper has two objectives: First, to assess the effectiveness of the ABS regime implemented by the CBD and the NP on the basis of its central instrument: the ABS agreements concluded between users and providers of GR. The aim is to accurately document the number of ABS agreements concluded since the entry into force of the regime. To our knowledge, such a counting that is neither piecemeal nor has an estimate yet been produced. To do so, I combine several sources, including first hand data collected from the official information agencies—the National Focal Points (NFP)—of each of the States Parties to the NP. Second, I provide a critical summary of the existing explanations of the low number of ABS agreements concluded and I evaluate the corresponding causal mechanisms, relying on the results I obtained regarding the number of permits and agreements. View Full-Text
Keywords: Access and Benefit Sharing; Convention on Biological Diversity; Nagoya Protocol; ABS agreements Access and Benefit Sharing; Convention on Biological Diversity; Nagoya Protocol; ABS agreements
►▼ Show Figures 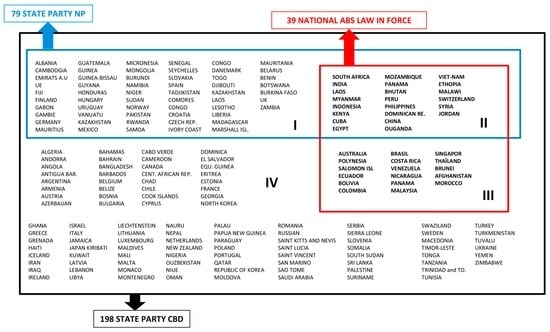 Pauchard, N. Access and Benefit Sharing under the Convention on Biological Diversity and Its Protocol: What Can Some Numbers Tell Us about the Effectiveness of the Regulatory Regime? Resources 2017, 6, 11.


Pauchard N. Access and Benefit Sharing under the Convention on Biological Diversity and Its Protocol: What Can Some Numbers Tell Us about the Effectiveness of the Regulatory Regime? Resources. 2017; 6(1):11.


Pauchard, Nicolas. 2017. "Access and Benefit Sharing under the Convention on Biological Diversity and Its Protocol: What Can Some Numbers Tell Us about the Effectiveness of the Regulatory Regime?" Resources 6, no. 1: 11.