The Role of Prenatal Melatonin in the Regulation of Childhood Obesity

Spaghetti to a Tree: A Robust Phylogeny for Terebelliformia (Annelida) Based on Transcriptomes, Molecular and Morphological Data

Terebelliformia—“spaghetti worms” and their allies—are speciose and ubiquitous marine annelids but our understanding of how their morphological and ecological diversity evolved is hampered by an uncertain delineation of lineages and their phylogenetic relationships. Here, we analyzed transcriptomes of 20 terebelliforms and an outgroup to build a robust phylogeny of the main lineages grounded on 12,674 orthologous genes. We then supplemented this backbone phylogeny with a denser sampling of 121 species using five genes and 90 morphological characters to elucidate fine-scale relationships. The monophyly of six major taxa was supported: Pectinariidae, Ampharetinae, Alvinellidae, Trichobranchidae, Terebellidae and Melinninae. The latter, traditionally a subfamily of Ampharetidae, was unexpectedly the sister to Terebellidae, and hence becomes Melinnidae, and Ampharetinae becomes Ampharetidae. We found no support for the recently proposed separation of Telothelepodidae, Polycirridae and Thelepodidae from Terebellidae. Telothelepodidae was nested within Thelepodinae and is accordingly made its junior synonym. Terebellidae contained the subfamily-ranked taxa Terebellinae and Thelepodinae. The placement of the simplified Polycirridae within Terebellinae differed from previous hypotheses, warranting the division of Terebellinae into Lanicini, Procleini, Terebellini and Polycirrini. Ampharetidae (excluding Melinnidae) were well-supported as the sister group to Alvinellidae and we recognize three clades: Ampharetinae, Amaginae and Amphicteinae. Our analysis found several paraphyletic genera and undescribed species. Morphological transformations on the phylogeny supported the hypothesis of an ancestor that possessed both branchiae and chaetae, which is at odds with proposals of a “naked” ancestor. Our study demonstrates how a robust backbone phylogeny can be combined with dense taxon coverage and morphological traits to give insights into the evolutionary history and transformation of traits. View Full-Text
Keywords: phylogenomics; transcriptomics; Annelida; Terebelliformia phylogenomics; transcriptomics; Annelida; Terebelliformia
►▼ Show Figures 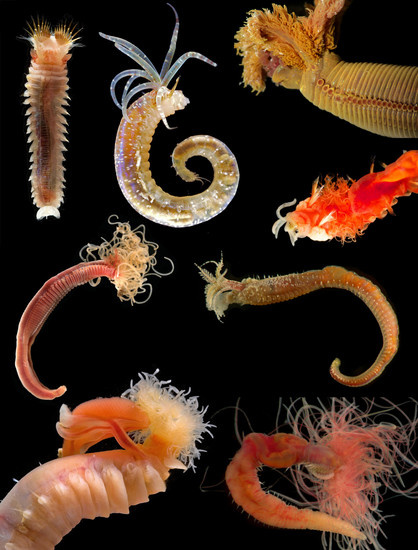