The Biological Impacts of Sitagliptin on the Pancreas of a Rat Model of Type 2 Diabetes Mellitus: Drug Interactions with Metformin

Sitagliptin, a dipeptidyl peptidase-4 (DPP-4) inhibitor, is a beneficial class of antidiabetic drugs. However, a major debate about the risk of developing pancreatitis is still existing. The aim of the work was to study the histological and immunohistochemical effects of sitagliptin on both endocrine and exocrine pancreases in a rat model of type 2 diabetes mellitus and to correlate these effects with the biochemical findings. Moreover, a possible synergistic effect of sitagliptin, in combination with metformin, was also evaluated. Fifty adult male rats were used and assigned into five equal groups. Group 1 served as control. Group 2 comprised of untreated diabetic rats. Group 3 diabetic rats received sitagliptin. Group 4 diabetic rats received metformin. Group 5 diabetic rats received both combined. Treatments were given for 4 weeks after the induction of diabetes. Blood samples were collected for biochemical assay before the sacrification of rats. Pancreases were removed, weighed, and were processed for histological and immunohistochemical examination. In the untreated diabetic group, the islets appeared shrunken with disturbed architecture and abnormal immunohistochemical reactions for insulin, caspase-3, and inducible nitric oxide synthase (iNOS). The biochemical findings were also disturbed. Morphometrically, there was a significant decrease in the islet size and islet number. Treatment with sitagliptin, metformin, and their combination showed an improvement, with the best response in the combined approach. No evidence of pancreatic injury was identified in the sitagliptin-treated groups. In conclusion, sitagliptin had a cytoprotective effect on beta-cell damage. Furthermore, the data didn’t indicate any detrimental effects of sitagliptin on the exocrine pancreas. View Full-Text
Keywords: sitagliptin; immunohistochemistry; insulin; caspase-3; iNOS; HFD/STZ diabetes; pancreas; rat sitagliptin; immunohistochemistry; insulin; caspase-3; iNOS; HFD/STZ diabetes; pancreas; rat
►▼ Show Figures 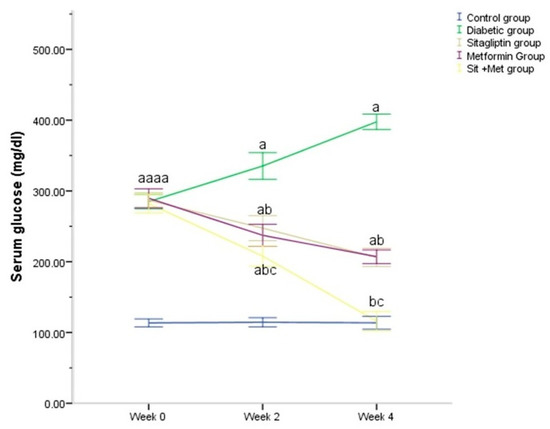