Was the Watchmaker Blind? Or Was She One-Eyed?
Previous Article in Special Issue

Age-Dependence and Aging-Dependence: Neuronal Loss and Lifespan in a C. elegans Model of Parkinson’s Disease

It is often assumed, but not established, that the major neurodegenerative diseases, such as Parkinson’s disease, are not just age-dependent (their incidence changes with time) but actually aging-dependent (their incidence is coupled to the process that determines lifespan). To determine a dependence on the aging process requires the joint probability distribution of disease onset and lifespan. For human Parkinson’s disease, such a joint distribution is not available, because the disease cuts lifespan short. To acquire a joint distribution, we resorted to an established C. elegans model of Parkinson’s disease in which the loss of dopaminergic neurons is not fatal. We find that lifespan is not correlated with the loss of individual neurons. Therefore, neuronal loss is age-dependent and aging-independent. We also find that a lifespan-extending intervention into insulin/IGF1 signaling accelerates the loss of specific dopaminergic neurons, while leaving death and neuronal loss times uncorrelated. This suggests that distinct and compartmentalized instances of the same genetically encoded insulin/IGF1 signaling machinery act independently to control neurodegeneration and lifespan in C. elegans. Although the human context might well be different, our study calls attention to the need to maintain a rigorous distinction between age-dependence and aging-dependence. View Full-Text
Keywords: C. elegans; Parkinson’s disease; disease of aging C. elegans; Parkinson’s disease; disease of aging
►▼ Show Figures 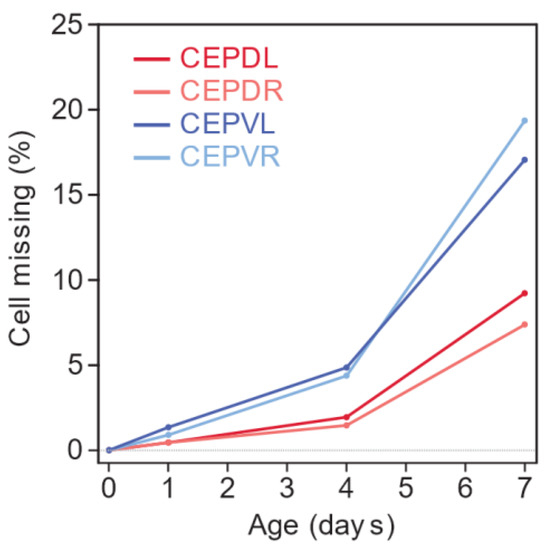