Ice deposited in Greenland and Antarctica entraps viable and nonviable microbes, as well as biomolecules, that become temporal atmospheric records. Five sections (estimated to be 500, 10,500, 57,000, 105,000 and 157,000 years before present, ybp) from the GISP2D (Greenland) ice core, three sections (500, 30,000 and 70,000 ybp) from the Byrd ice core, and four sections from the Vostok 5G (Antarctica) ice core (10,500, 57,000, 105,000 and 105,000 ybp) were studied by scanning electron microscopy, cultivation and rRNA gene sequencing. Bacterial and fungal isolates were recovered from 10 of the 12 sections. The highest numbers of isolates were found in ice core sections that were deposited during times of low atmospheric CO2, low global temperatures and low levels of atmospheric dust. Two of the sections (GISP2D at 10,500 and 157,000 ybp) also were examined using metagenomic/metatranscriptomic methods. These results indicated that sequences from microbes common to arid and saline soils were deposited in the ice during a time of low temperature, low atmospheric CO2 and high dust levels. Members of Firmicutes and Cyanobacteria were the most prevalent bacteria, while Rhodotorula species were the most common eukaryotic representatives. Isolates of Bacillus, Rhodotorula, Alternaria and members of the Davidiellaceae were isolated from both Greenland and Antarctica sections of the same age, although the sequences differed between the two polar regions. View Full-Text
Keywords: glacial ice; microbes; bacteria; fungi; Greenland; Antarctica; metagenomic; metatranscriptomic; cultures glacial ice; microbes; bacteria; fungi; Greenland; Antarctica; metagenomic; metatranscriptomic; cultures
►▼ Show Figures 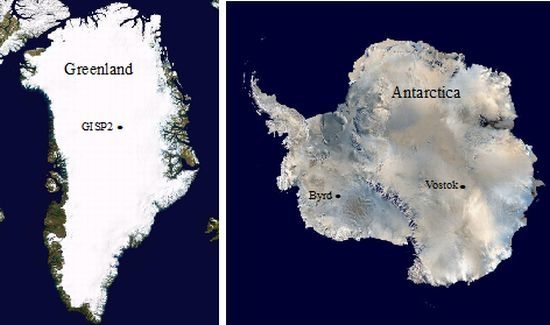