Assessment of Specific Tumoral Markers, Inflammatory Status, and Vitamin D Metabolism before and after the First Chemotherapy Cycle in Patients with Lung Cancer
Previous Article in Journal

As one of the major structural constituents, mobile elements comprise more than half of the human genome, among which Alu, L1, and SVA elements are still active and continue to generate new offspring. One of the major characteristics of L1 and SVA elements is their ability to co-mobilize adjacent downstream sequences to new loci in a process called 3′ DNA transduction. Transductions influence the structure and content of the genome in different ways, such as increasing genome variation, exon shuffling, and gene duplication. Moreover, given their mutagenicity capability, 3′ transductions are often involved in tumorigenesis or in the development of some diseases. In this study, we analyzed 3202 genomes sequenced at high coverage by the New York Genome Center to catalog and characterize putative 3′ transduced segments mediated by L1s and SVAs. Here, we present a genome-wide map of inter/intrachromosomal 3′ transduction variants, including their genomic and functional location, length, progenitor location, and allelic frequency across 26 populations. In total, we identified 7103 polymorphic L1s and 3040 polymorphic SVAs. Of these, 268 and 162 variants were annotated as high-confidence L1 and SVA 3′ transductions, respectively, with lengths that ranged from 7 to 997 nucleotides. We found specific loci within chromosomes X, 6, 7, and 6_GL000253v2_alt as master L1s and SVAs that had yielded more transductions, among others. Together, our results demonstrate the dynamic nature of transduction events within the genome and among individuals and their contribution to the structural variations of the human genome. View Full-Text
Keywords: DNA transduction; structural variants; mobile element insertions; human genomics; retrotransposon; 1000 Genomes Project DNA transduction; structural variants; mobile element insertions; human genomics; retrotransposon; 1000 Genomes Project
►▼ Show Figures 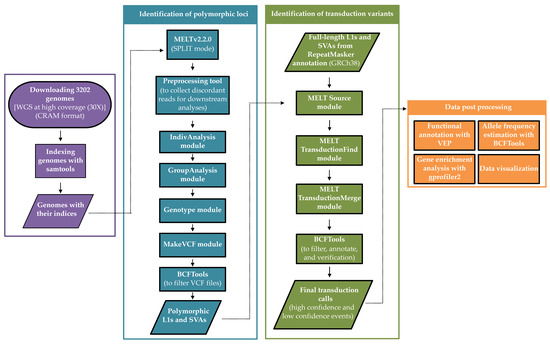