The ABC Model of Happiness—Neurobiological Aspects of Motivation and Positive Mood, and Their Dynamic Changes through Practice, the Course of Life

Pelagic Bacteria and Viruses in a High Arctic Region: Environmental Control in the Autumn Period

Microbial plankton represent a pivotal component of aquatic ecosystems worldwide. Despite their importance in pelagic ecosystems, microbial assemblages are less studied, in many Arctic regions. The study was concerned with the abundance of marine bacteria and viruses, in relation to a set of environmental variables, after the main productive season. We found a mosaic horizontal distribution of the microbial plankton, while the number of bacteria and viruses decreased with depth. Nutrients and zooplankton carbon were significant drivers of microbial abundance. Bacterioplankton abundance was positively correlated with counts of viruses, indicating close relations between these groups of microbes. Comparisons with previous studies revealed strong seasonal variations in the total abundance of marine bacteria, with the maximum values being in the summer and spring periods, while virioplankton counts were comparable in the autumn and spring–summer seasons. Our study is the first report regarding microbial plankton in the northeastern Barents Sea, in the autumn period, and provides baseline information, expanding current knowledge on the structure of pelagic Arctic ecosystems.

In the marine environment, bacteria and viruses play a significant role in carbon fluxes, remineralization processes, and the infection of various organisms. We performed a survey in the northeastern Barents Sea, a region adjacent to the Arctic Ocean, to investigate spatial patterns of microbial plankton, after the main productive period, in October 2020. Two main water masses occurred in the study region—colder Arctic Water and warmer Barents Sea Water, representing transformed Atlantic Water. Multivariate analyses detected patchiness in the horizontal distribution of bacteria and viruses, and their abundances showed no clear association with the water masses. There was an obvious vertical pattern in microbial concentration, with the highest estimates in the upper layers. Surface viral and bacterial abundance varied in a wide range (2.20 × 105–10.7 × 105 cells·mL−1 and 0.86 × 106–14.98 × 106 particles·mL−1, respectively) and were correlated with each other. Bacterioplankton was dominated by small-sized cells (<2 μm, 0.04–0.06 µm3), and the average volume of bacterial cells tended to increase toward the seafloor. The ratio of viral to bacterial abundance (VBR) was 11 ± 1 and did not differ between water masses and depth layers. VBR were higher, compared to summer values, suggesting a strong impact of viruses on bacterioplankton, after the main productive season. Redundancy and correlation analyses showed that inorganic nutrients (nitrate and phosphate) and organic carbon from zooplankton were most responsible for the total variability in the microbial parameters. Water temperature and salinity, also, had a measurable impact, but their influence was lower. Bacterial abundance was lower than in other seasons and regions of the Barents Sea, while viral abundance was comparable, suggesting a stronger viral impact on Arctic marine bacteria in the autumn season. View Full-Text
Keywords: bacterioplankton; virioplankton; zooplankton; Barents Sea; Arctic Ocean; environmental influence bacterioplankton; virioplankton; zooplankton; Barents Sea; Arctic Ocean; environmental influence
►▼ Show Figures 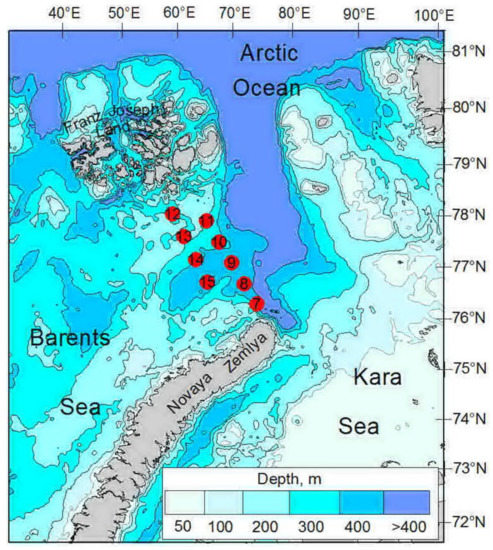