Humans extirpated the wolf Canis lupus from many regions of Europe. Today, the wolf is returning to many of these areas, and with it, people’s opposition due to its predatory habits on, among others, ungulate game species. Based on existing data on wolf prey selection, kill rates and territory size, we extrapolated the results from central Sweden and Poland to southern Sweden, where wolf recolonization has not yet occurred and conservation conflicts with hunters are expected. Thus, we calculated the proportion of moose Alces alces, roe deer Capreolus capreolus, red deer Cervus elaphus, fallow deer Dama dama and wild boar Sus scrofa that would be killed by wolves in the municipalities of southern Sweden if wolf recolonization occurs. We found that the current system of five ungulate species in southern Sweden could potentially support a wolf density two to four times higher than in the current wolf distribution in central Sweden, which are mainly inhabited by roe deer and moose. With this type of research, we can anticipate and work to ameliorate the social unrest and expected conservation conflicts that may arise once wolves or other large carnivore species recolonize areas of Europe that are returning to the wild.

The ongoing recolonisations of human-transformed environments in Europe by large carnivores like the wolf Canis lupus means that conservation conflicts could re-surface, among other reasons, due to predation on ungulate game species. We estimated the effect of wolves on ungulate species using data on wolf prey selection, kill rates and territory size to build a hypothetical case of future expansion. We extrapolated results on predation from the current wolf distribution in central Sweden and eastern Poland to the eventual wolf recolonisation of southern Sweden. We then calculated the proportion of five ungulate game species killed annually by wolves, and the ratio between the predicted annual predation by wolves given future colonization and the number of ungulates currently harvested by hunters. Results showed that wolf recolonization in southern Sweden would have a minor impact on the estimated population densities of red deer Cervus elaphus, fallow deer Dama dama and wild boar Sus scrofa, but is likely to lead to a significant reduction in human captures of moose Alces alces and roe deer Capreolus capreolus. The current five-ungulate species system in southern Sweden suggests a potential for two to four times higher wolf density than the two-ungulate species system in the northern part of their current distribution. Management and conservation of recolonizing large carnivores require a better understanding of the observed impact on game populations under similar ecological conditions to ameliorate conservation conflicts and achieve a paradigm of coexistence. Integrating these predictions into management is paramount to the current rewilding trend occurring in many areas of Europe or North America. View Full-Text
Keywords: trophic rewilding; human-predator conflicts; wolf recolonisation; game hunting; wolf predation; prey-species selection trophic rewilding; human-predator conflicts; wolf recolonisation; game hunting; wolf predation; prey-species selection
►▼ Show Figures 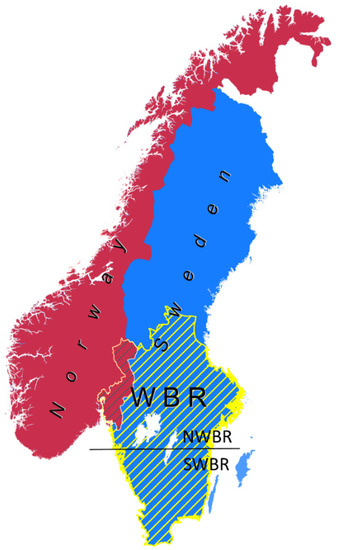