Emerging Roles of the MICOS Complex in Cristae Dynamics and Biogenesis

Cellular heterogeneity represents the observation that in an organ, neighboring cells of the same type may show structural and functional differences that evolve from their different stages of differentiation, maturation, or exposure to environmental challenges. Whichever is the trigger, the outcome is structural diversity that results in varying functionality. Similar to cellular heterogeneity, the pool of mitochondria within a singular cell may also represent mitochondria at different stages of their development as well as the consequences of their response to the cellular environment [1]. This review will focus on the subcellular heterogeneity of the mitochondria within the same cell, the mechanisms generating subcellular heterogeneity, and the functional consequences thereof [1,2,3,4].
Metabolic diseases can be inherited, known as inborn errors of metabolism, or they can be acquired. This review will focus on mitochondrial heterogeneity reported in metabolic diseases resulting from excess nutrient exposure, focusing on their effects in the pancreatic beta-cell and the renal proximal tubule cells. Specifically, an examination of the heterogeneity in mitochondrial membrane potential, morphology, and calcium reported in type 2 diabetes (T2D) and kidney diseases. Also included is a review of mitochondrial subpopulations that show the difference in their metabolism and function, but how these differences are generated remains unclear.

1.1. What Is Heterogeneity and Why Should We Care?

Mitochondria are highly dynamic organelles that respond to changes in their immediate environment through diverse structural and functional adaptation, resulting in intracellular heterogeneity. When subcellular heterogeneity is induced by metabolic stress, we define this occurrence as the pathological state, under which mitochondria display an increase in functional diversity. In pancreatic beta-cells and renal proximal tubule cells, metabolic stress via high levels of glucose and free fatty acids increase heterogeneity by disrupting the mitochondrial fusion. Depending on the degree and duration of metabolic stress, increased heterogeneity affects cellular behavior and can contribute to the pathogenesis of T2D and chronic kidney disease [16,17,18].

Mitochondria within the same cell display a wide heterogeneity in mitochondrial membrane potential (MMP) (Figure 2A) [9,19,20]. The range of MMP variation is considerably larger when challenged by stressors such as oxidative stress, aging, and excess fuel, suggesting that pathology can be associated with higher heterogeneity in MMP. In hepatic, cardiac, and neuronal cell models, it has been noted that mitochondria depolarize or hyperpolarize in the face of stressors, and not all mitochondria respond similarly to stress [19,21,22,23]. As an example, in cardiomyocytes, subcellular domains with elevated ROS or changes in pH induce depolarization in neighboring mitochondrial subsets, by activating the permeability transition [24]. In hepatocytes isolated from old rats, Nicholls et al. showed mitochondria in the same cell did not all have the same MMP. Differences in voltage were observed in one mitochondrial population: 10% of the mitochondria had an MMP of 154 mV, 65% had 94 mV, and 25% had 74 mV [19]. The observed diversity in MMP is in part attributed to factors such as the subcellular localization of mitochondria within a hepatocyte, with these locations showing differences in fuel supply and ATP demand. As a result of differential substrate and ion exposure, shifts in ATP demand and fuel availability generate fluctuations in MMP. Glucose availability influences the metabolic state of the cell and contributes to rapid MMP fluctuations [20].
An excessive supply of glucose and free fatty acid (FFA) levels increased intracellular MMP heterogeneity in beta-cells, conditions mimicking T2D in vitro [5,21,24]. This effect of high nutrient availability in vitro supports that increased MMP heterogeneity within a single beta-cell is a characteristic of mitochondrial dysfunction in diabetic beta-cells. Single beta-cells treated with exogenous substrates saw a 37% increase in MMP heterogeneity compared to untreated cells—all the while maintaining morphology [5,24]. Hyperpolarization of beta-cell mitochondria has been well correlated with insulin secretion in response to glucose concentrations [20]. Upon assessing contributors to the mechanism of glucose-induced MMP heterogeneity, Wikstrom et al. identified BAD, a proapoptotic BCL-2 family member. This identification suggested that individual mitochondria may carry different amounts of BAD protein to generate MMP heterogeneity. Plasma membrane depolarization mediated by ATP closing KATP channels and an increase in cytosolic calcium are both shown to be triggering events in glucose-stimulated insulin secretion [25]. As such, glucose-induced mitochondrial hyperpolarization functionally affects the glucose concentration-dependent increase in insulin secretion [25,26].
Similar to beta-cells, kidney diseases also yield disruption of homogenous intracellular MMP. Increases in kidney MMP heterogeneity have been observed to either increase due to ROS, a decline in ATP production, or loss of cristae structure [27,28,29]. Specifically, changes to membrane potential have been observed in these two kidney disease models: (1) reduction in FAO and (2) loss of AMPK activity. In the first case, impaired FAO was modeled by the knockdown of the FAO enzyme CPT2. The CPT2 knock-down model reduced mitochondrial FAO, reduced lipid accumulation, increased renal fibrosis, and increased intracellular MMP heterogeneity. CPT2-deficient mitochondria measured by JC-1 revealed significant increases in membrane potential standard deviation, a measure of intracellular membrane potential heterogeneity [28]. In a separate study, Kodiha et al. developed a model for kidney disease by inhibiting AMPK activity in LLC-PK1 cells, cells derived from the renal proximal epithelium. Short-term inhibition of AMPK resulted in both mitochondrial fragmentation and significant increases (+32%) in MMP as measured by MitoTracker CMX ROS/TOM70 ratio. Furthermore, treatment with compounds aimed at AMPK modulation also resulted in increased MMP heterogeneity. Some compounds elevated intracellular MMP overall while maintaining differences in morphology; others reduced intracellular MMP heterogeneity across the mitochondrial population [29]. The variation in increasing or reducing membrane potential observed across treatments leads authors to postulate the variance, as a readout either as drug effectivity or as membrane potential may influence treatment effects. In both disease models, cellular metabolism was reflected in MMP, and a pathological decline in proximal tubular FAO and lipid accumulation was reflected in increased intracellular MMP heterogeneity.

2.2. Brief Overview of Mediators in Mitochondrial Fusion and Fission

Mitochondrial architecture is determined by motility, fusion, and fission events. Although some disorders of mitochondrial dynamics result from monogenic mutation, most reflect changes in the function of fission and fusion mediators due to changes in the cellular environment. Fission and fusion influence cellular processes such as ATP production, ROS generation, and calcium homeostasis and consequently impact bioenergetics and mitophagy [30].
Fusion in mammals is mediated by the outer mitochondrial membrane proteins Mitofusin 1 and 2 (Mfn1 and Mfn2) and the inner mitochondrial membrane protein, optic atrophy gene 1 (Opa1). Mitofusins are targeted to the mitochondria by sequences in their transmembrane and C-terminal domains. Through the C-terminal, Mfn1/2 initiate fusion by creating homodimeric or heterodimeric, antiparallel, coiled-coil linkages between mitochondria. Mfn2 is also located in the endoplasmic reticulum (ER) and promotes ER-mitochondria tethering. Calcium storage is one of the functions commonly attributed to the ER; hence, mitochondria–ER tethering enhances mitochondrial calcium uptake and alters morphology. In the case of OpaI, fusion activity is mediated by proteolytic processing. OpaI also controls cristae remodeling independent of fusion [30,31,32]. OPA1 has eight splice variants, each with differential fusion activity and mitochondrial protease susceptibility. The fusion mediators also regulate mitochondrial metabolism, and when they are downregulated or dysfunctional, there is generally a reduction in mitochondrial oxidative capacity [10].
On the other hand, mitochondrial fission is mediated by the outer mitochondrial membrane proteins, fission 1 protein (Fis1) and mitochondrial fission factor (Mff), and the cytosolic dynamin-related protein 1 (Drp1). GTP hydrolysis and recruitment of Drp1 to the outer mitochondrial membrane are required for Drp1-mediated fission [33]. Furthermore, Drp1 activity is regulated by the phosphorylation of serine 616 and serine 637. Phosphorylation of serine 616 increases DRP1 activity, whereas phosphorylation of serine 637 decreases it. Mff and Fis1 have been shown to mediate fission by recruiting Drp1 to the mitochondria [10,34,35].

3. Mitochondrial Heterogeneity as It Exists under Physiological States

3.3. Mitochondrial Calcium as an Intracellular Heterogeneity Amplifier in Morphology and Motility

4.1. The Advantages of Mitochondrial Heterogeneity

4.2. Challenges and Considerations to Be Made When Studying Intracellular Heterogeneity

4.3. Remaining Questions in the Field 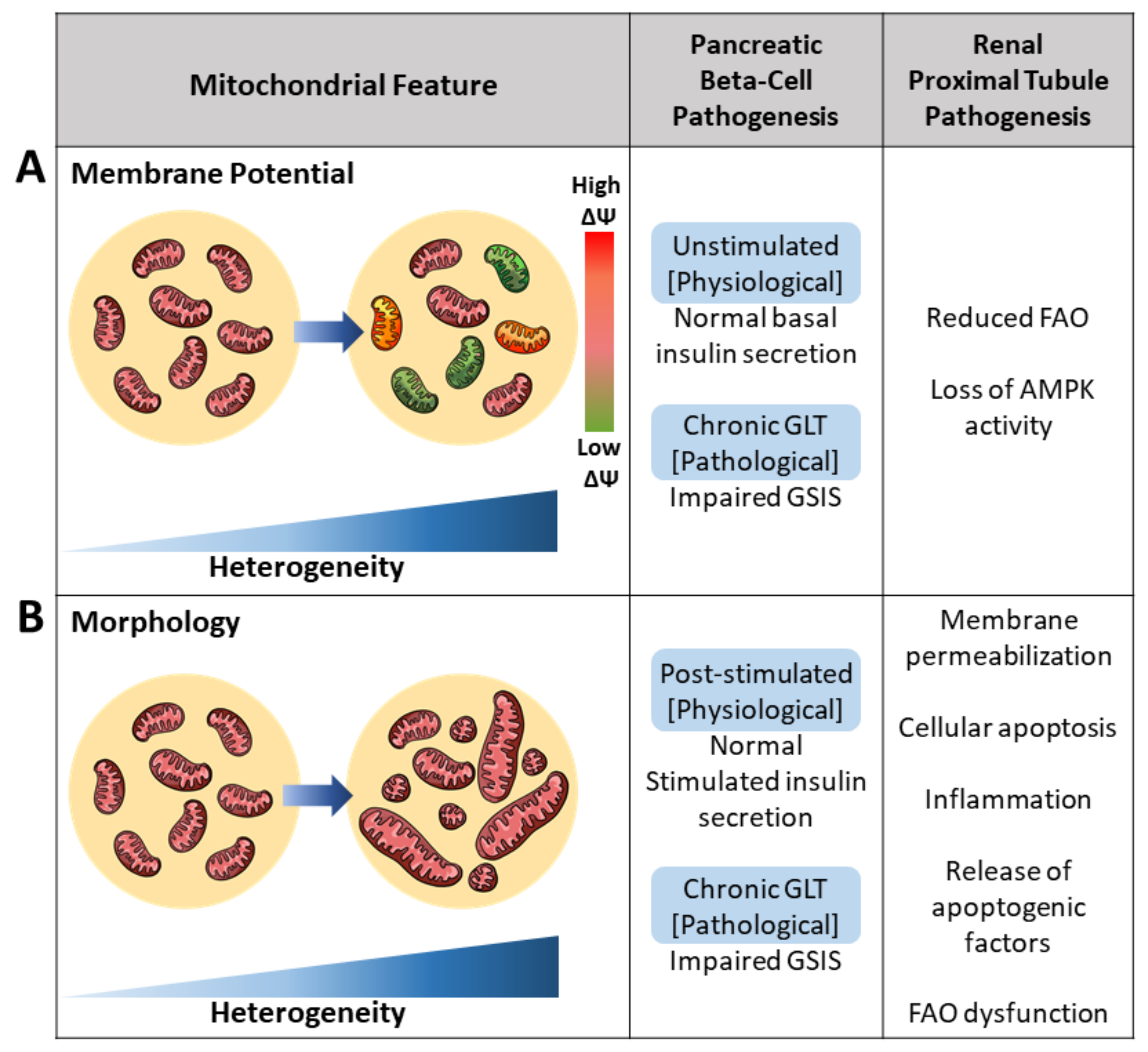 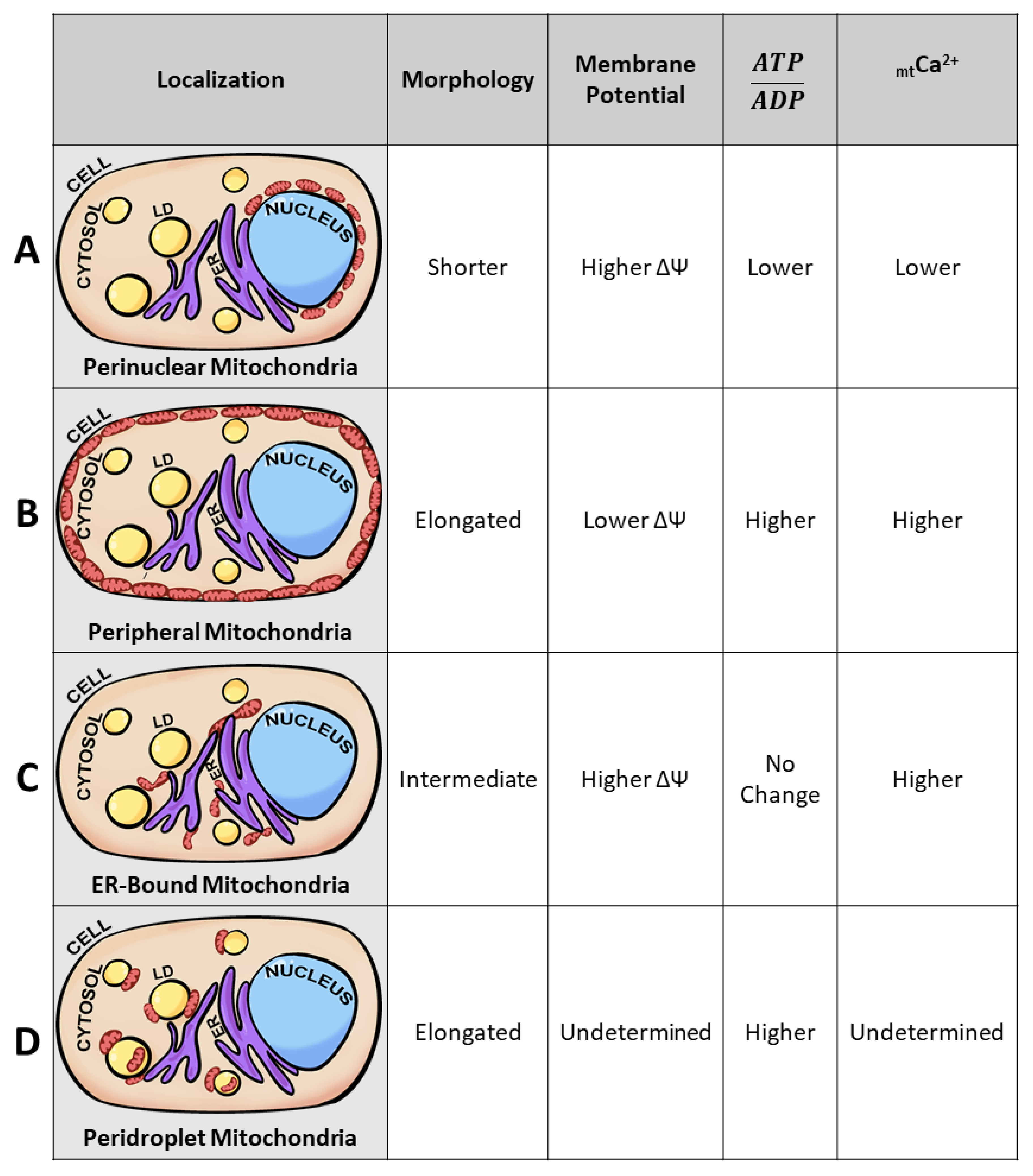 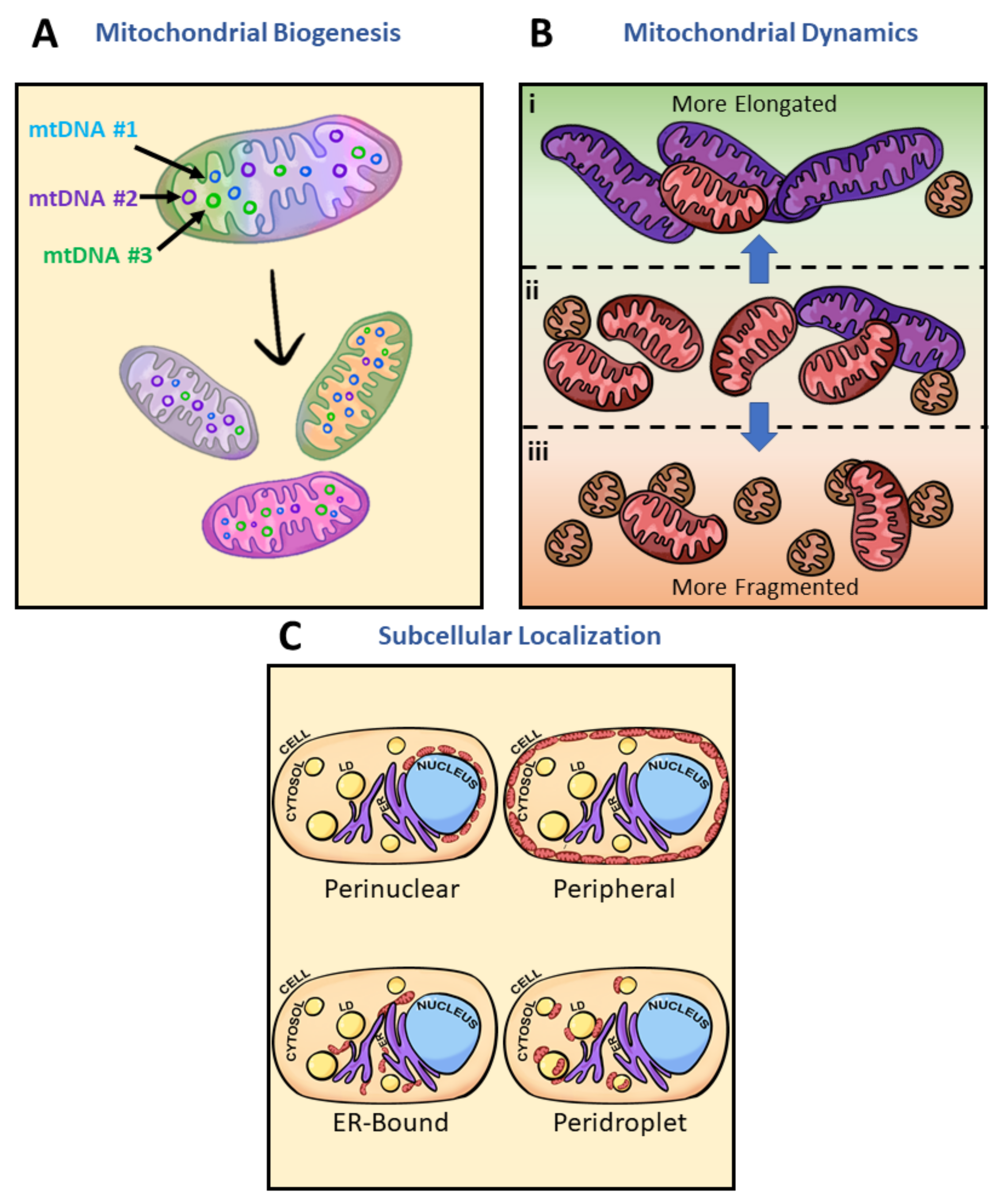