δ-Cells: The Neighborhood Watch in the Islet Community
Previous Article in Journal

Human Fatalities Caused by Hornet, Wasp and Bee Stings in Spain: Epidemiology at State and Sub-State Level from 1999 to 2018

Although not frequent, hornet, wasp, and bee stings may be life-threatening. Over the 20-year period studied, a total of 78 fatalities were recorded in Spain, the annual mortality rates ranging from 0.02 to 0.19 per million inhabitants. The fatal events mainly affected men over 65 years of age, and took place in summertime, at “unspecified places”. At regional level, the deaths tended to concentrate in three communities: Galicia, Andalucía, and Castilla y León. Surprisingly, Galicia showed high mortality rates in hornet stings. The implication of the invasive species Vespa velutina, also known as the Asian hornet, is examined. In light of the findings, there is evidence to consider the health-related importance and consequences of Vespa velutina.

Epidemiology of fatalities in Spain due to hornet, wasp, and bee stings (Cause Code of Death: X23) is described. Over a 20-year period (1999–2018), a total of 78 fatalities were recorded, mostly occurring in males (85.9%), of 65 years and older (52.6%), at “unspecified places” (67.9%), and in the months of July and August (50%). The X23 mortality rates (X23MR) expressed in terms of annual rates and per million inhabitants, varied from 0.02 to 0.19 (mean value ± standard deviation = 0.09 ± 0.05), placing Spain at low levels in comparison with other countries. A more detailed and specific breakdown of the distribution of the yearly deaths at the sub-state level and across communities reveals some striking features. They were more concentrated in the communities of Galicia (35.8%), Andalucía (21.7%), and Castilla y León (12.8%). X23MR were estimated in Galicia at 1.82, 1.10, and 2.22 in 2014, 2016, and 2018, respectively; and in Asturias at 1.88 and 0.97, in 2014 and 2017, respectively. The role of the invasive species Vespa velutina (VV) is examined. Due to its habits, abundance, and broader distribution, the risk that VV represents to human health is unmatched by other Hymenoptera native species. View Full-Text
Keywords: epidemiology; X23; fatalities; venomous animals; Spain; stings; hornets; wasps; bees; Vespa velutina epidemiology; X23; fatalities; venomous animals; Spain; stings; hornets; wasps; bees; Vespa velutina
►▼ Show Figures 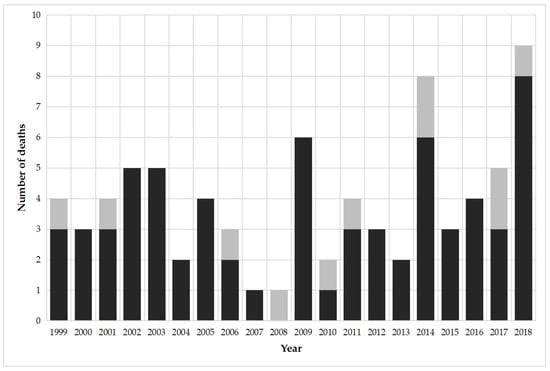