A total of 29 fibronectin type III domain (FN-III) protein genes from the buffalo genome were detected and characterized. The molecular and evolutionary analysis demonstrated the well-conserved nature of FN-III proteins with a variety of stable to unstable, hydrophobic to hydrophilic, and thermostable to thermo-unstable properties. For the first time, we predicted the binding scores and interface residues of FNDC5/irisin as a ligand for six representative receptors, having a functional role in energy homeostasis, and significant involvement in folliculogenesis, and spermatogenesis in buffalo.

FN-III proteins are widely distributed in mammals and are usually involved in cellular growth, differentiation, and adhesion. The FNDC5/irisin regulates energy metabolism and is present in different tissues (liver, brain, etc.). The present study aimed to investigate the physiochemical characteristics and the evolution of FN-III proteins and FNDC5/irisin as a ligand targeting the gonadal receptors including androgen (AR), DDB1 and CUL4 associated factor 6 (DCAF6), estrogen-related receptor β (ERR-β), estrogen-related receptor γ (ERR-γ), Krüppel-like factor 15 (KLF15), and nuclear receptor subfamily 3 group C member 1 (NR3C1). Moreover, the putative role of irisin in folliculogenesis and spermatogenesis was also elucidated. We presented the molecular structure and function of 29 FN-III genes widely distributed in the buffalo genome. Phylogenetic analysis, motif, and conserved domain pattern demonstrated the evolutionary well-conserved nature of FN-III proteins with a variety of stable to unstable, hydrophobic to hydrophilic, and thermostable to thermo-unstable properties. The comparative structural configuration of FNDC5 revealed amino acid variations but still the FNDC5 structure of humans, buffalo, and cattle was quite similar to each other. For the first time, we predicted the binding scores and interface residues of FNDC5/irisin as a ligand for six representative receptors having a functional role in energy homeostasis, and a significant involvement in folliculogenesis and spermatogenesis in buffalo. View Full-Text
Keywords: buffalo; FN-III proteins; FNDC5/irisin; receptors; binding affinities buffalo; FN-III proteins; FNDC5/irisin; receptors; binding affinities
►▼ Show Figures 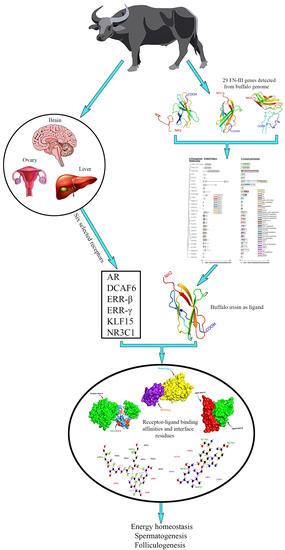