:
The experimental data presented in this work show the effects of nozzle diameter, drawing speed, and formation temperature on the diameter and strength of basalt filaments and melt flow rate. Several series of basalt continuous fibers were obtained using a specially designed crucible of platinum–rhodium alloy with four nozzles of different diameters (1.5, 2.5, 3.5, and 4.5 mm). The conditions of the process varied in formation temperature (from 1370 to 1450 °C) and winding speed (from 300 to 1200 m/min). Melt flow rate was almost independent of the winding speed, indicating laminar flow of the melt through the nozzles and the Newtonian nature of the liquid. The results show strict correlations between fiber diameter, nozzle diameter, and winding speed. The diameter of the fibers had a significant effect on their strength. The tensile strength of the obtained basalt fibers varied from 550 to 3320 MPa depending on the formation conditions. The results of this work could be useful not only for scientists, but also for technologists seeking the optimal conditions for technological processes.
Keywords:
basalt fiber; tensile strength; nozzle; technology

Fiber-reinforced polymer composites are widely used in different sectors of industry and technology. In recent years, significant growth has been observed in the manufacture of composite materials based on basalt continuous fibers (BCFs). They can successfully replace traditional construction materials, and can also be applied to conditions that exclude the use of metals [1]. Basalt fibers exhibit good adhesion to various polymeric binders: epoxy [2], polycarbonate [3], poly(butylene succinate) [4], etc. Therefore, the prospect of their use in fiber-reinforced polymer composites instead of E-glass fibers is very high. Basalt fibers show better alkali resistance than E-glass fibers. They are a promising reinforcing component for concrete reinforcement [5,6].
Basalt continuous fiber production technology consists of several stages: glass melting, melt homogenization, formation, sizing, and winding. Most works in this area are devoted to the study of the dependence of different physicochemical properties of basalt melts, glasses, and fibers on their chemical composition. Glasses based on basalts are multicomponent systems with the following composition, in mass. %: SiO2 43–58, Al2O3 11–20, CaO 7–13, FeO + Fe2O3 8–16, MgO 4–12, R2O ≤ 4. The effects of both glass-forming oxides [7,8] and modifier oxides have been studied [9]. Researchers have mostly paid attention to the effects of iron oxides [10,11].
Although the first continuous glass fibers based on rocks were obtained in the middle of the 20th century, the development of the BCF production technology is still hampered. The process of basalt continuous fiber production is quite complicated. It is influenced by various factors, such as melt viscosity, melt surface tension, and crystallization ability. In addition to that, external factors such as winding speed, flow rate, external cooling condition, and thermal uniformity play a role. The first group of parameters is primarily defined by the chemical composition of the raw materials. The second group can be conventionally attributed to the technological parameters [12]. The effect of technological parameters (winding speed, melt temperature, nozzle diameter, etc.) on the properties of basalt continuous fibers has been insufficiently studied.
The influence of the basalt and E-glass melt viscosity, cooling rate, structural heterogeneity, and technological defects on mechanical and thermal properties have been thoroughly studied by Yue et al. [13,14,15,16]. For E-glass fibers, the effects of parameters such as the length and diameter of the nozzle, winding speed, and temperature of the melt were studied [17,18]. In contrast to the composition of E-glass melt, basalt melts have a significantly higher ability to crystallize. As a result, basalt melt has a narrow production temperature range, which leads to a catastrophically large number of fiber breaks. This dramatically affects the capacity of the technological plants.
The bushing for basalt and glass fibers is made of a platinum–rhodium alloy, which makes studying the effects of shape and size of the nozzles on the filament formation process and the properties of continuous fibers very expensive. Due to low thermal conductivity and viscosity, the basalt melt flowing through the nozzle plate has a high temperature gradient [16,19]. Due to its high crystallization ability, this can have a significant effect on the stability of the fiber-forming process as well as the mechanical properties of the fibers [20]. The diameter of the nozzle can have a significant impact on this process.
A crucible of platinum–rhodium alloy with four nozzles of different diameters (1.5, 2.5, 3.5 and 4.5 mm) was specially designed and made for the purpose of this work. During fiber formation, we varied both the preparation temperature (from 1370 to 1450 °C) and the winding speed (from 300 to 1200 m/min). The melt flow through the nozzles, diameter of fibers, and influence of technological parameters on the strength of continuous basalt fibers for all series of samples were studied.

X-ray fluorescence analysis of the specimens was performed on a PAN Analytical Axios Advanced spectrometer (PANalytical B.V., Almelo, The Netherlands). Characteristic X-rays were excited using a 4 kW Rh-anode X-ray tube. The excited radiation was recorded by a scanning channel with five exchangeable wave crystals and a detector. Measurements were made in transmission geometry in vacuum. Specimens were prepared in the form of pellets with a binder.

The tensile strength of the fibers was determined with a Hounsfield H100K-S (Hounsfield Test Equipment Ltd., Redhill, UK) universal tensile testing machine. Specimens were mounted in paper support frames using epoxy. The gauge length was 10 mm, and the crosshead speed was 5 mm/min (ISO 5079).

Basalt continuous fibers were produced using a laboratory-scale system [21]. BCFs were drawn from melts and wound onto a take-up reel. According to X-ray diffraction, all obtained samples were amorphous. The chemical composition was determined by X-ray fluorescence analysis and contained (in wt.%): 55.6% SiO2, 1.1% TiO2, 15.8% Al2O3, 10.5% Fe2O3, 3.7% MgO, 9.2% CaO, 2.2% Na2O, and 1.8% K2O. All the iron is reported as Fe2O3.
A special crucible was designed To investigate the effect of the nozzle diameter on the strength properties of the basalt continuous fibers and the basalt melt flow (Figure 1). The crucible was made of a platinum–rhodium alloy (90/10). The scheme and dimensions of the crucible are presented in Figure 1. At the bottom of the crucible there were four nozzles with inner diameters of 1.5, 2.5, 3.5, and 4.5 mm. The length of each nozzle was 2.8 mm.
In order to obtain the fiber, previously prepared basalt glass was added to the crucible. Then, the melt was heated to the formation temperature. Basalt continuous fibers were obtained at temperatures corresponding to the lower, middle, and upper limits of the formation temperature range (1370, 1410, and 1450 °C, respectively). During the experiments, the winding speed of the take-up reel was varied from 300 to 1200 m/min.
The experiment was carried out so that the level of the melt for each obtained sample differed by no more than 10%. The melt level was calculated based on the mass of the obtained sample and the geometric dimensions of the crucible.
In order to determine the possibility of using nozzles with the given diameters in industrial-scale plants, the number of filament breaks within 20 minutes of drawing was calculated. It was possible to achieve a stable process of fiber formation for the experiments with nozzles having diameters of 2.5, 3.5, and 4.5 mm. For the 1.5-mm diameter nozzle, it was not possible to obtain fibers steadily.
The diameter and tensile strength were measured for all obtained fibers. The melt flow rate was determined by calculation based on the measured diameters and density. Table 1, Table 2, Table 3 and Table 4 present the obtained results.

To perform the work, a special crucible with four nozzles of different diameter (1.5, 2.5, 3.5, and 4.5 mm) was designed and produced. Basalt continuous fibers were obtained with varying formation conditions. The conditions of the process varied in formation temperature (from 1370 to 1450 °C) and winding speed (from 300 to 1200 m/min). It was found that the melt flow rate was almost independent of the winding speed, which indicated the laminar flow of the melt through the nozzles. The melt flow rate correlated linearly with the biquadratic nozzle diameter. The diameter of the fibers had a significant effect on the strength thereof. The change in the nozzle diameter with a given stabilized winding speed led to a change in the diameter of the fiber. Changes in the basalt melt viscosity during the formation led to high crystallization ability, which significantly affected the strength of the fiber. The tensile strength of the obtained basalt fibers varied depending on the production conditions, from 550 to 3320 MPa.

S.I.G. prepared and tested the specimens, performed the experiment and supported to test the specimens, B.I.L. analyzed the graphics, reviewed and supervisor the paper. 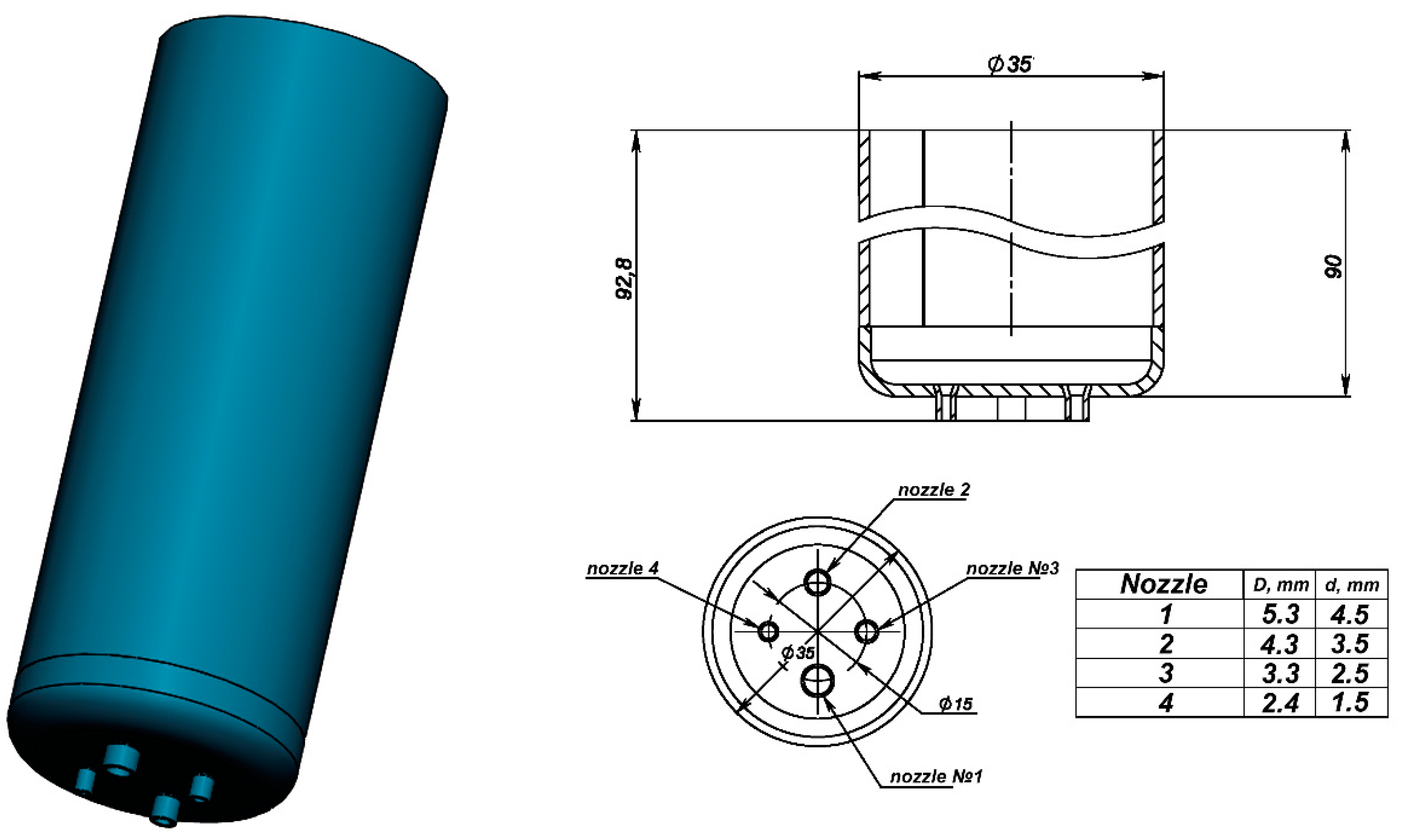 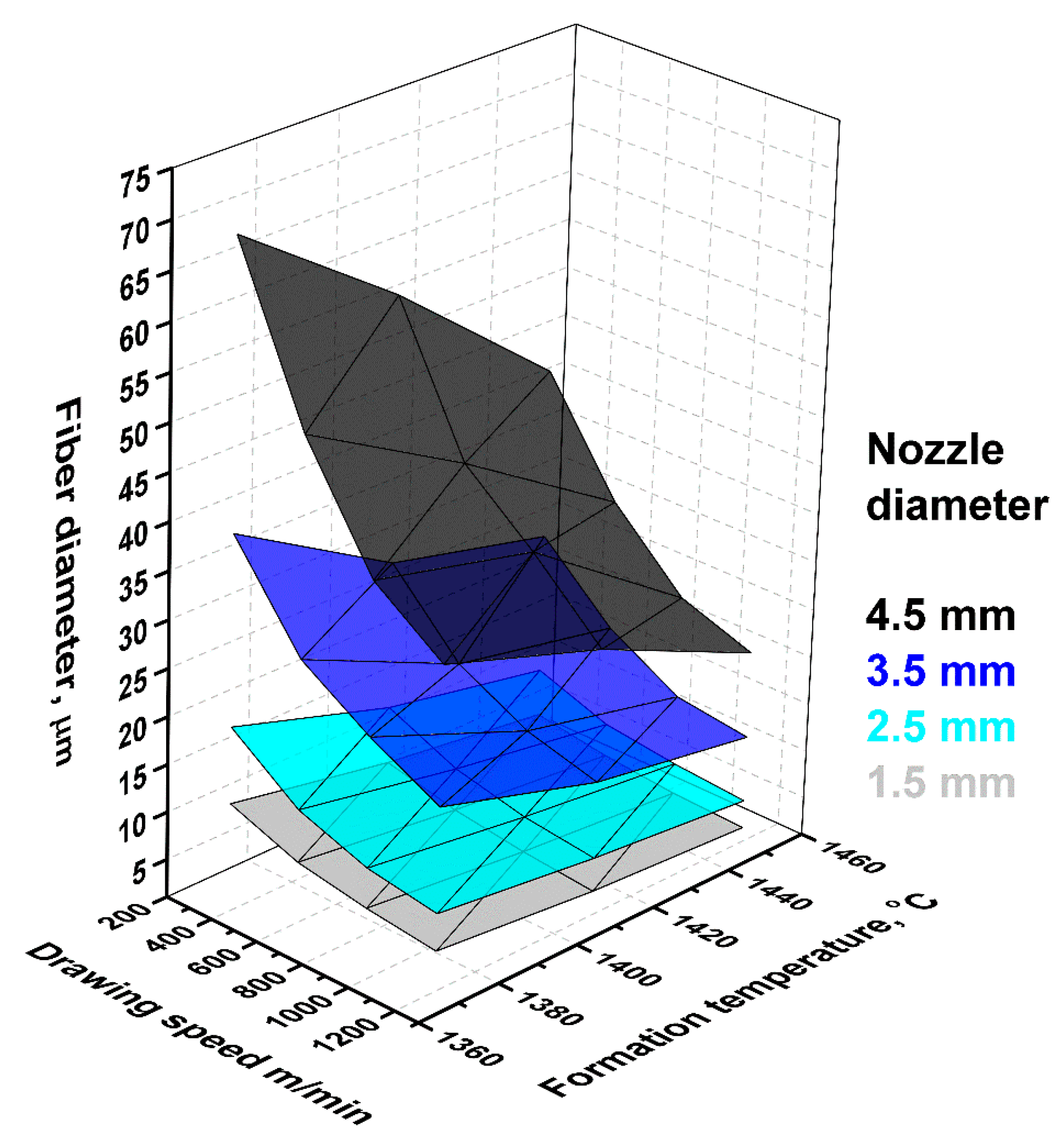 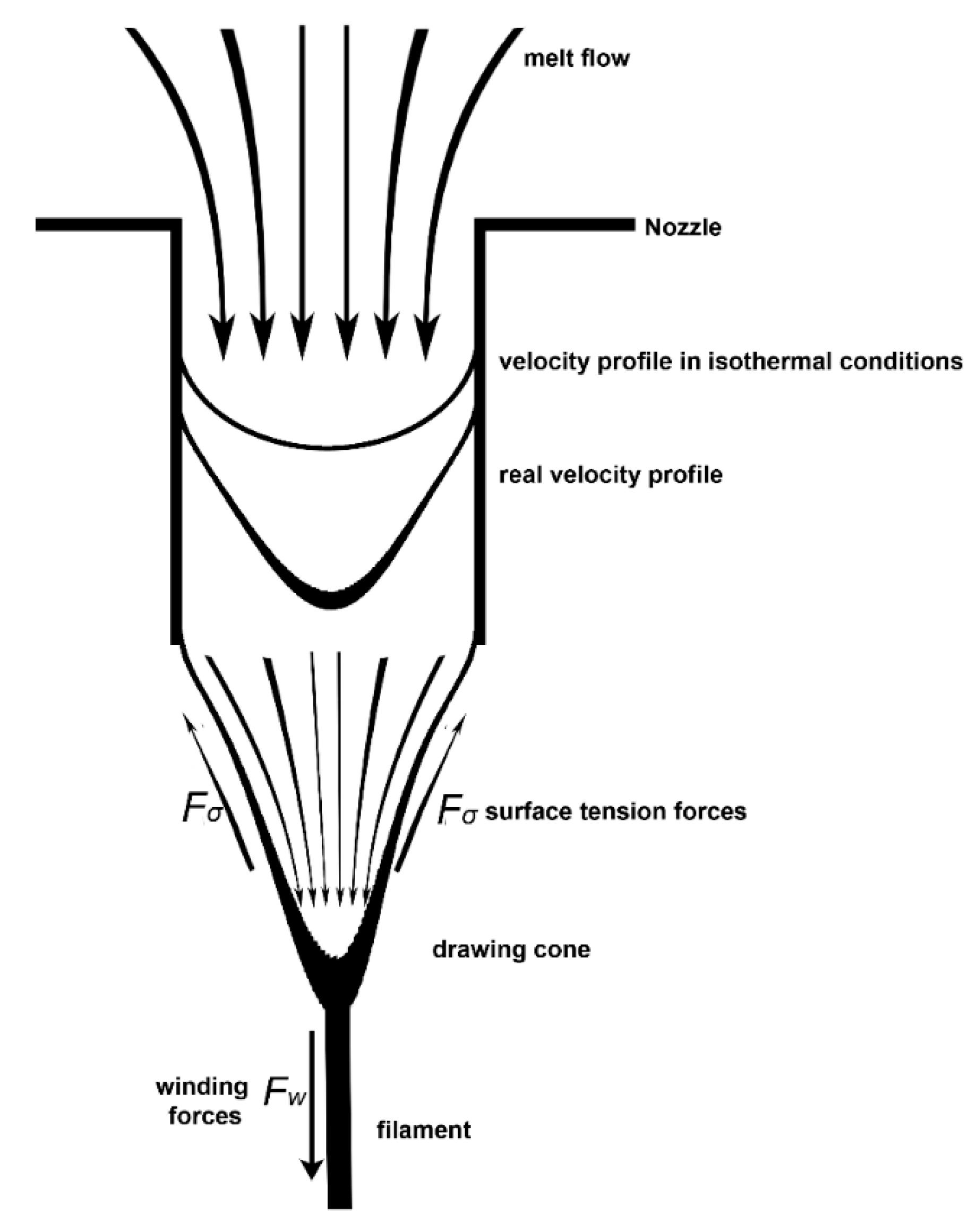